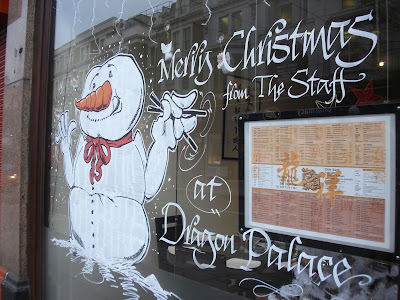 A walk along Earl's Court Road is quite soul-destroying if you're a food snob (or even if you're not). Wagamama, Masala Zone, Zizzi, McDonalds, Nando's, Costa, Starbucks and KFC – the usual chain suspects that blight the streets of London are all present and correct.

So it's a pleasant surprise to see a decent Chinese restaurant in this corner of the capital. Dragon Palace might look like a regulation High St Chinese but scratch beneath the surface and you'll discover some very interesting dim sum and noodle dishes. This isn't a new opening; it's been around for a few years but it just hasn't caught the eye of many bloggers or critics.

Joining me for lunch were fellow bloggers Su-Lin and Gourmet Chick, we all live out west so this was a handy spot to meet. Unbelievably, both of my dining companions had previously been to this restaurant, albeit off the blog and not for dim sum. And there was me thinking that I'd found somewhere far from the blogging crowd!

The Noodles
星州炒銀針粉 Fried 'Needle Noodles' Singapore style (£5.80)
'Needle noodles' originate from Southern China and are also very popular amongst the Chinese communities of Singapore and Malaysia. Their proper name is silver needle noodles (银针粉) and they're also known as rat noodles (老鼠粉) because they're tapered like a rat's tail. 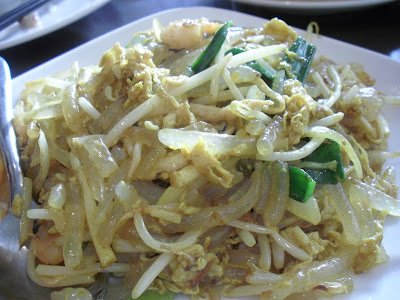 These noodles are rarely seen in the UK and I was curious as to their sourcing. Stupid question really, as the noodles are hand-made on the premises. I'm not sure how they manage to make them so translucent, as these noodles are usually made out of rice flour.

We ordered the fried 'Needle Noodles' Singapore style, which is essentially that old classic, Singapore noodles. This dish is a guilty pleasure of mine and you can't go far wrong with it. Reassuringly yellow-tinged from the curry powder, these noodles were a fine accompaniment to our dim sum feast.

All of the steamed dumplings were well made and generously filled, with my favourite being the village dumplings. I've not come across these before, and unusually for dim sum, they were filled with fish in the form of red tilapia amongst other bits and bobs. The wrapper was a bit too sticky but the filling was delicate, juicy and flavoursome.

The steamed squid was also interesting and I really enjoyed the very garlicky dressing. That said my inner-Homer prefers his squid deep-fried. Both types of steamed bun were of decent quality and the weekend special of pork belly & taro buns were reminiscent of Taiwanese gua bao (刮包), albeit a stripped-down mini-wraparound version. If I was being ultra-critical, it could've done with some pickles but really it was fine as it was.

The fried offerings were every bit as good as their steamed counterparts. The yam croquettes were very fresh, as my burnt mouth can testify. I also liked their version of squid cakes, which were unusually wrapped in tofu skin (腐皮 fu pi) before frying. This gave them a crispy shell whilst retaining a springy interior – highly ingenious!

We didn't order the red bean paste dessert, which arrived because of a mix-up over which special we'd ordered. After sending it away, it earned a late reprieve due to Su-Lin's intervention. You'll like it if you like red bean paste.

I'm not a big turnip paste fan but it was well made as was the pan-fried cheung fun. Despite being a very popular street food dish way out east, few dim sum joints sell the latter in the UK. I love the crust that forms on the bottom of these otherwise silky smooth rice noodle rolls. This dish was packed full of flavour from the soy and in particular, the dried shrimp (蝦米 har mai). 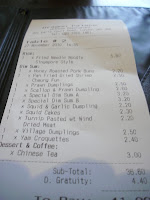 The Details
Dragon Palace looks very ordinary from the outside and by the standards of Chinese restaurant design is quite minimalist. The service was good in an unassuming way and they didn't rush us out of the door when we finished.

The presentation of the lunch menu is highly praiseworthy being in English, Chinese characters and transliterated Cantonese. It also has pictures and a brief description of each dish. In addition to the Cantonese dim sum, the menu has a definite Straits Chinese influence with the likes of char kway teow and nasi goreng making an appearance.

The bill was a mere £41 between the three of us including tea and 12.5% service – that's less than £14/head. In comparison, Chinatown prices are about the same but you'll be hard pushed to find the same quality. Whilst a similar sized feast at one of the more heavyweight dim sum joints such as Pearl Liang, Phoenix Palace, or Royal China might cost nearer the £20/head mark.

The Verdict
Dragon Palace deserves plaudits for doing things a little differently. I think it's brilliant that they go to the trouble to make their own noodles as well as knock up weekend specials. This is an accessible and affordable option for quality dim sum, especially for those with a W in their postcode.