The Battle of Tonkotsu: Cocoro v Tonkotsu Bar and Ramen

There are many places that serve ramen in London, but very few serve tonkotsu ramen (豚骨ラーメン). So in this post I'm going to check out this most iconic of Japanese soup noodle dishes in a slightly nerdy head-to-head comparison between rival restaurants, Cocoro and Tonkotsu Bar & Ramen.

Round 1: The Broth
The most important aspect of tonkotsu ramen (and indeed any soup noodle dish) is the broth. Tonkotsu means 'pork bones' in Japanese, and it is these that give the broth a rich, meaty flavour and a thick, cloudy quality. And in that respect the broth at Cocoro is a clear winner with a good salty and porky balance. It also looked the part, with a layer of fat and a cloudy appearance from the broken-down collagen.

That's not to say Tonkotsu's effort was bad. After all, it was cloudy and a bit fatty, but it just wasn't as good as Cocoro's effort. Nevertheless, I do applaud the addition of Japanese black sesame oil (mayu マー油) to the broth.

Round 2: The Noodles
Honours are even in this round. Both places used good quality thin ramen noodles (tonkotsu should be served with thin noodles) that were cooked to springy perfection. However, I was a bit miffed at how small the helping of noodles was at Cocoro.

Round 3: The Toppings
The toppings at both restaurants could have been better, and in Cocoro's case, they could have been a lot better. For starters, I'm not sure why the toppings were presented on a separate plate (this is more common when serving Vietnamese pho, not Japanese ramen) but it only served to highlight the measly helping of belly pork and the rather tired-looking boiled egg.

Even if Cocoro had set the bar higher, Tonkotsu would have still won this round easily. Why? The soy-marinated egg with its gooey yolk was bloody amazing, and the single best thing about this bowl of noodles. The slices of rolled pork belly were also of a better quality then Cocoro's. However, I wasn't a fan of the beansprouts, and I wish there was more menma (bamboo shoots) instead. And finally, both bowls of noodles lacked dried nori seaweed. That really pissed me off.

Round 4: Value For Money
Given the portion size at Cocoro, the £13 price tag (per the main dinner menu) takes the piss. That said, they serve a tonkotsu set lunch, which with extras is also £13 - a more affordable option. And in case you're wondering, Cocoro isn't as upscale as you might expect from its la-di-da Marylebone address to justify this kind of pricing.

The £11 price tag at Tonkotsu (actually £11.50, as I ordered an extra half egg at 50p) isn't exactly cheap either. Especially, when one considers Tonkotsu is quite a casual eatery. Granted, Japanese food in London is rarely cheap (I've written a whole post on why that might be) and compared to noodles in other Asian cuisines; the prices at both places aren't exactly great value. And that's why I'm scoring this round as a draw.

Round 5: The Rest
The two eateries are quite different in that Cocoro is an all-round Japanese restaurant with a comprehensive menu encompassing sushi, sashimi, tempura and other (non-noodle) choices in addition to the noodle dishes. In contrast, Tonkotsu is a noodle bar with a very limited menu (three noodle choices, some sides and a few desserts). As such it is hard to compare the two in a meaningful way.


In terms of the other dishes I tried, they were OK at Cocoro, but if I'm being honest I can't remember much about the takoyaki, tempura and other treats I sampled. The special of cod katsu I sampled at Tonkotsu was also OK if a little underseasoned. Looking at the service and ambience, there wasn't much in it between the two. When I think about it, I really can't split the two restaurants on non-noodle criteria.

The Verdict
So who is the winner of The Battle of Tonkotsu? It's a draw. Cocoro has the better broth while Tonkotsu has the better toppings, and there are no other factors that prove decisive in swinging it one way or another. In the final analysis, I'd say Tonkotsu is ideal for a quick bowl of ramen while Cocoro is better if you want to share lots of different dishes in addition to the noodles. 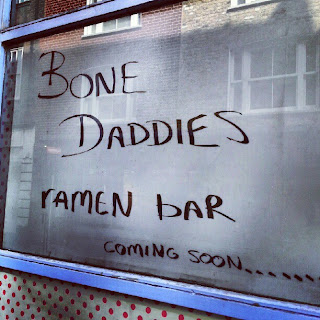 Are There Any Other Contenders?
As you might have gathered, in my opinion, the battle between Cocoro and Tonkotsu was more Everton v Newcastle than Man United v Man City, i.e. not a bad match, but not a top-of-the-table clash. But are there any London restaurants that rustle up tonkotsu ramen of a quality comparable to that of the udon at Koya?

The short answer is not anywhere I've been to. I'd say Cocoro and Tonkotsu (along with Nagomi) are as good as it gets in the capital. The only other place I tried tonkotsu ramen in London was Toku (adjacent to the Japan Centre) but its effort was very mediocre. So much so, I couldn't be arsed to blog about it. There is one further potential contender: Soho's Bone Daddies (I'm assuming that tonkotsu ramen will be on the menu when they open later this year). Perhaps they will hit upon a winning mix of broth, noodles and toppings. And without wishing to bang on about it too much, I hope they remember to put in a sheet of nori! 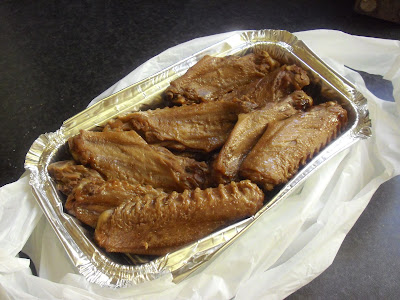 I love this dish, as the master stock (lou sui 滷水), made with soy, star anise, cinnamon, citrus peel and heaps of other stuff, is absorbed by the duck wings as they slowly braise. Making master stock is best left to the professionals, which is my way of saying that this isn't a recipe post (come on now, you didn't really expect two recipe posts in a row?).

Dishes cooked with master stock are collectively known as lou mei 滷味, and this technique originated in the Chiu Chow (Teochew) area in Guangdong province. However, lou mei spread to other parts of southern China, which is why it can often be found in Cantonese restaurants around the world.

The most famous lou mei dish is braised goose in master stock, but for some frustrating reason Chinese goose dishes aren't available in blighty. As such, Cantonese restaurants in the UK tend to sell lou mei as a mixture, but I just order the braised duck wings because I'm a bad Chinese (please don't judge me, but entrails and gizzards aren't my thing).

The duck wings in the photo are from one of my favourite Chinatown haunts, Hung's, but you can find them in many Cantonese restaurants, usually the ones that sell Cantonese BBQ (siu mei 燒味). So the next time you find yourself in Chinatown, order a bag of duck wings to take home with you. You won’t regret it.
Posted by Mr Noodles at Tuesday, September 18, 2012 11 comments:

Like many people, I dream about recreating dishes from my travels. The thing is, though, these dreams stay largely in my head. Why? Well to draw a sporting analogy, cooking is very much like diving or gymnastics. By that I mean both 'difficulty' and 'execution' come into play when judging how well a particular dish turns out. And as I am far from being adept in the kitchen, I'm limited to dishes that aren't that 'difficult'. So sorry guys, my attempt at knocking up xiao long bao will just have to wait another day. 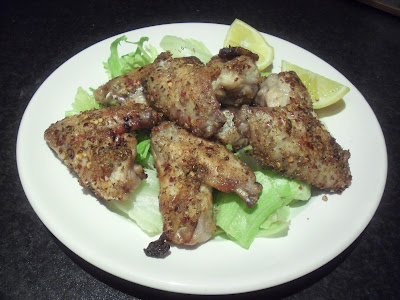 Instead, here's a simple recipe inspired (not for the first time) by a Beijing restaurant: Xinjiang-style chilli & cumin chicken wings. I tried these out at a joint called Xiao Wang's, and while I have no idea if it's an authentic dish as rustled up by the Uyghur people from Xinjiang in China's Wild West, who really cares? After all, these chicken wings, liberally laced with chilli and cumin, are proper fiery, super-tasty and highly addictive. And the best thing of all is that even kitchen-numpties, like me, can score high 'execution' marks! 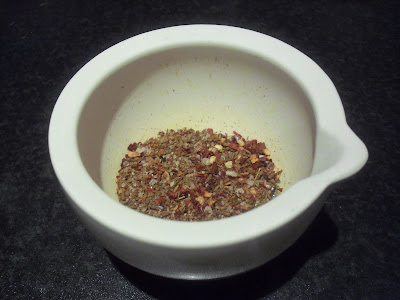 Xinjiang-style Chilli & Cumin Chicken Wings
The ingredients and instructions are just a guide, and you should feel free to experiment and play around with the ingredients in proportions that work for you.

Method
1) Mix the juice of a lemon with a shot glass of sesame oil in a bowl.

2) Mince a couple of cloves of garlic and add to the marinade.

3) Place chicken wings in a large freezer bag and add the marinade.

4) Give the bag a bit of a grope to ensure the marinade covers all the wings.

5) Tie the bag and leave for a few hours (twitter consensus says 3 hours is plenty).

7) Line an oven tray with foil and place a wire rack over it.

8) Arrange chicken wings on rack and place tray in oven for 40-45 mins.

9) Toast cumin seeds in a dry frying pan for 5 mins or so.

10) Add the toasted cumin seeds along with dried chilli flakes and coarse sea salt to a mortar & pestle and give them a good old grind.

11) Remove chicken wings from oven and test a larger one to check that it's cooked through.

12) Add some of the chilli cumin salt mix to a mixing bowl.

13) Add a couple of the wings to the bowl and toss in the mix until covered to your satisfaction.

15) Serve chicken wings on top of some lettuce with some lemon wedges on the side.

Top Tips
1) Toast the cumin seeds on the lowest heat and give them an occasional toss to prevent burning.

2) Make plenty of spice mix – you don't want to be left short with a few wings to go! Any spice mix you don't use can be saved and used in other dishes e.g. spare ribs and lamb chops.
Posted by Mr Noodles at Tuesday, September 11, 2012 8 comments: