Regular readers will know that I'm a big fan of Shanghai cuisine. Sadly, it isn't all that common in London but through comments left on my blog and some research on Chowhound, I came across two places, Red Sun and M&Z, that serve authentic Shanghai dishes. Of the two, the latter seemed more welcoming, which is why I pitched up there recently with Les and Bob. 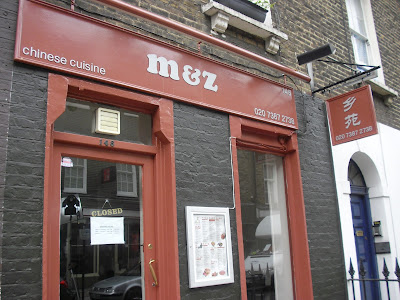 M&Z is named after its two co-owners, Mr M and Mr Z – one from Sichuan, the other from Shanghai. As such, the menu is a mix of their respective native cuisines with a few 'greatest hits' thrown in. I've eaten enough Sichuan over the last few years to be considered an honorary Sichuanese so I made it clear in no uncertain terms that we were only ordering Shanghai dishes gently steered my dining companions towards the Shanghai section of the menu.

The Starters
Rather bizarrely I couldn't find 小笼包 xiao long bao on the menu but the waitress said that they did serve them. These were reassuringly handmade but they could've been more delicate and soupy for my liking. That said I am a fussy-bollocks when it comes to these king of dumplings. 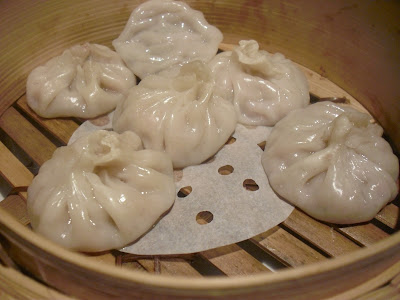 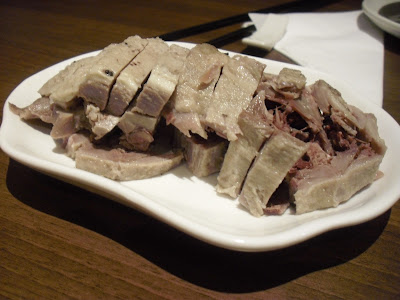 金陵盐水鸭 Jinling salted duck (£5.90) is also known as Nanjing salted duck and this cold starter was ball-breakingly authentic and technically spot on. But then I recalled that on the rare occasion that I've sampled this dish, I've found it too salty for my liking. It went well with the beer though.

The Mains
We probably over ordered but given the early onset of wintry weather, we managed to finish everything off. 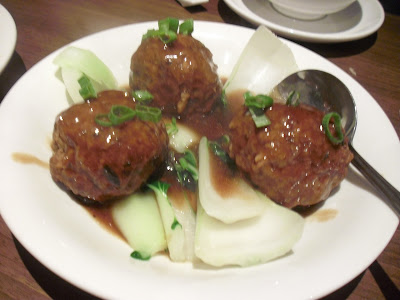 狮子头 Meatballs with homemade sauce (£8.70) aka shizi tou or lion's head meatballs is a classic Shanghai dish. These were well made, moist and juicy and whilst cooked through (they were pre-cooked), the meatballs hadn't been properly heated through and were a little lukewarm in the middle. 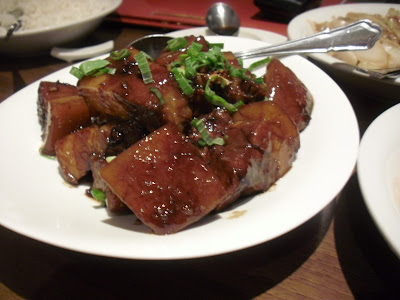 红烧肉 Grandmother braised pork (£7.90) aka hong shao rou or red-cooked pork belly was the star of the evening. You can't go much wrong with pork belly and if I was to be ultra-picky, it was just a bit too sweet for my liking and it could've been cooked for a bit longer. 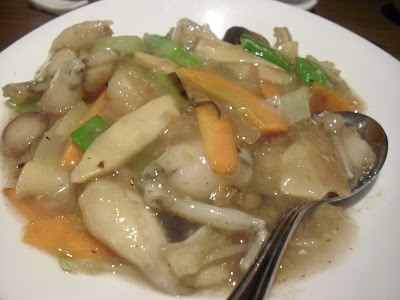 ??田鸡 Quick fried frog in homemade sauce (£12.80) – the frogs' legs were succulent but the accompanying sauce was a nasty gloopy affair that detracted from this dish. 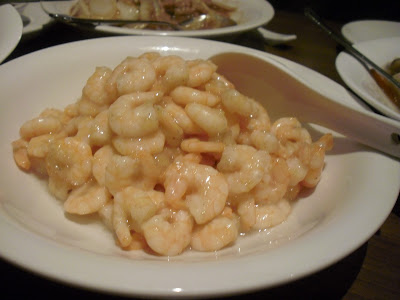 水晶虾仁 Quick fried prawns Shanghai style served with vinegar (£8.90) – when I've sampled this dish in China, it's a real gem that's made with fresh river prawns. Sadly, this version was made with defrosted prawns. 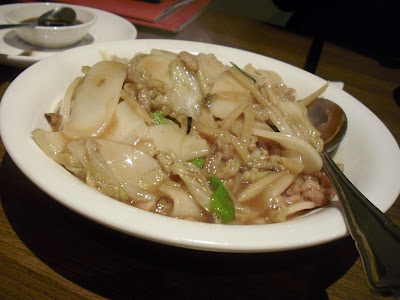 上海炒年糕 Stir-fried rice cake with sliced pork Shanghai style (£5.30) – sliced glutinous rice cake or niangao is a Shanghainese speciality that is sometimes eaten instead of noodles. I liked this homely dish but a few of the rice cakes were still hard.

The Dessert
酒酿圆子 Glutinous rice ball in sweet rice wine (£2.80) – I was in two minds about dessert but I decided to give it a miss. Bob didn't and I think he quite enjoyed this dessert. To be honest, I can't remember whether he did or not! 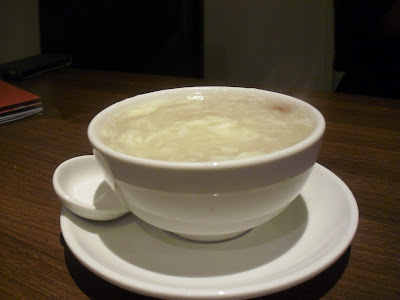 The Details
I like the small intimate dining room at M&Z, which holds around 25 diners. There's also a downstairs dining room with another 20 or so covers. The service was attentive and charming and Mr Z (or was it Mr M?) had a quick chat with us about his restaurant.

The bill with rice, tea and beer came to £80.50 or apx £27/head including 10% service. We spent £60 on food but as I stated earlier, we probably over ordered and you could get away with spending less. 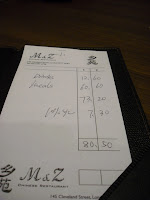 The Verdict
M&Z was a bit hit and miss but I don't want to be too harsh on this restaurant. The most important thing was that I had a good night out.

Looking back, I was benchmarking M&Z against the Shanghainese restaurants that I've visited in China. This isn't entirely fair and it should be noted that my dining companions didn't share all of my criticisms.

On balance, this is somewhere that I'd like to revisit and next time I may give their Sichuan dishes a try.