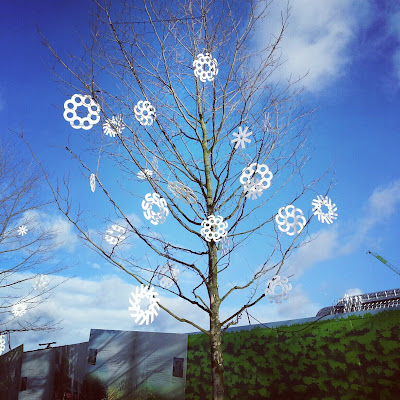 It's the last post of the year. It's also time to wish all my readers a Merry Christmas! See you all in the New Year for more half-arsed ramblings about food.
Posted by Mr Noodles at Friday, December 21, 2012 2 comments: 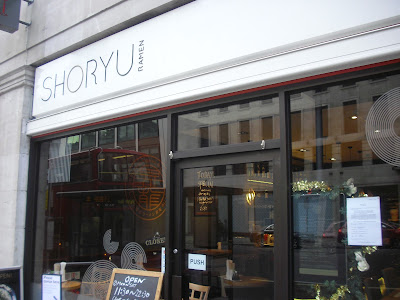 In a world where some in the restaurant industry use social media really badly, it's refreshing to see Shoryu Ramen use it so effectively. For instance, when some old grumpy-bollocks (that's me by the way) had a whinge on twitter about the thick noodles Shoryu used during the soft opening, not only did they introduce a new, thinner noodle but I also received a tweet from @shoryuramen to let me know about it. Other punters lamented the nitamago egg had to be ordered separately. Again, Shoryu listened, and half an egg was introduced as standard in the noodle bowls. I know listening to feedback is the whole point of a soft opening, but it doesn't always pan out that way.

Thick noodles aside, I enjoyed my bowl of yuzu tonkotsu ramen, but as a rule I don't judge anywhere solely on a soft opening, so I made plans to return when the food was being sold at full price. It seemed I wasn't the only one with that idea, as the restaurant was nearly full at 11.45am the Saturday morning I went. 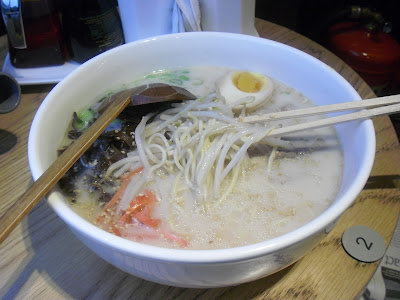 I ordered the basic Hakata tonkotsu ramen (£8) to see how it stacked-up against rival tonkotsu. The first thing that struck me was the broth; it was milky white, there was lots of it and it was steaming hot - all good. It was thinner than the tonkotsu broth found at some rival London joints, but it retained sufficient porkiness and also had a pleasing smoky quality about it. On the minus side, the chashu bbq pork and the half a nitamago egg were somewhat pedestrian. I liked the other toppings of red ginger, kikurage (wood ear fungus), nori, beansprouts, spring onion and sesame, but it would've been good to see some menma (fermented bamboo shoots) in the bowl. 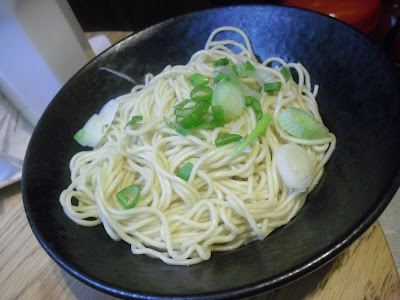 The thinner hosomen ramen noodles are an improvement on those used during the soft opening. These had a nice 'bite' to them, and I ordered an extra portion (£1.50) to soak up the broth. I was pretty full after this and got me thinking that Shoryu probably offers the best value tonkotsu ramen in London. 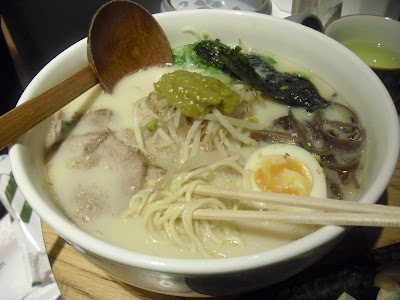 Shoryu also probably offers the most options for tonkotsu ramen in London, with no less than seven different tonkotsu-based dishes including the likes of wasabi and piri-piri (incidentally, non-tonkotsu fans can plump for miso and shoyu-based soup noodles). On my most recent visit, I went for the top-of-the-range yuzu tonkotsu ramen (£10.40) - a bowl of the Hakata tonkotsu ramen topped with a dollop of yuzu jam and some chilli. I was glad that, with the exception of the thinner noodles, it hadn't changed since the soft opening. I like this particular combo, as the tart citrusy notes of the yuzu jam and the spiciness of the chilli lift the smoky porky tonkotsu soup-base, without overpowering it. 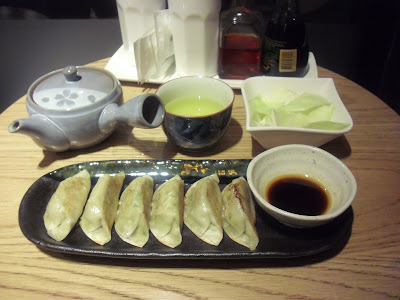 I also ordered some gyoza (6pcs/£5); these were OK without being outstanding. Perhaps these humble pork dumplings should be the next dish to get some love and attention in London. After all, when was the last time you could say you had really top class gyoza in the capital? Having said that, I'm probably being a bit harsh; these dumplings were better than say those at Tonkotsu or Ittenbari. On the non-food front, the service is good although the dining room is a bit clinical for my liking.

So what's the overall verdict? I like Shoryu a lot, but it isn't quite the definitive ramen bar that London is screaming out for. For instance, both Bone Daddies and Tonkotsu serve better quality pork and egg in their dishes. However, I prefer the way the broth is served at Shoryu i.e. plenty of it, steaming hot. In terms of a favourite, I can't really split Shoryu and Bone Daddies; I like them in different ways with the former being more traditional, the latter more radical.

There is, however, one winner: London. There is now a genuine ramen rivalry in the capital, not only between my current favourites but also with other 2012 openings such as Tonkotsu and Ittenbari as well as old stagers like Cocoro and Nagomi. I'm hoping that this competition, with maybe some more contenders in 2013, will further raise standards. 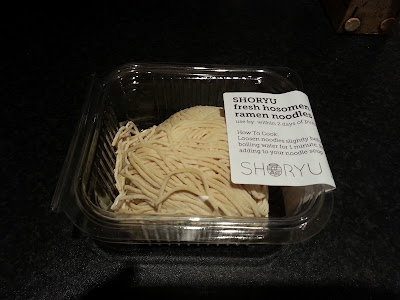 One last thing! Shoryu sell fresh hosomen ramen noodles (£1.50 for 125g) to take home. These are pretty good, but if you do buy them I recommend an extra step in the cooking instructions: rinse after cooking before adding to the soup. This is to remove the alkali soapy taste from the noodles. 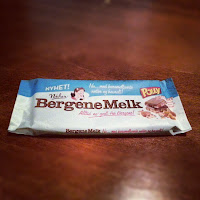 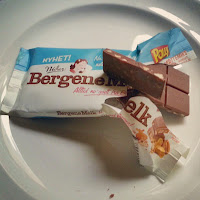 Having bought my train ticket to Oslo airport, I was left with NOK 30 change to spend. So it was with a degree of serendipity that I saw a sign advertising a two-for-NOK 30 offer on chocolate bars. I was on it in a flash, and before long I was the proud owner of two bars of Bergene Melk. To be honest, I only went for this particular brand because the packaging looked nice. But the gods of fortune were on my side again; it turned out I had bought milk chocolate studded with cashews and pecans with a touch of sea salt. It was bloody delicious. While there are posh chocolatiers that make a superior product, I'm hard pushed to think of a mainstream British chocolate bar that tastes as good as this. So if you do find yourself in Norway, get some Bergene Melk. Given the prices there, it could well be the only thing you can afford to eat.
Posted by Mr Noodles at Sunday, December 09, 2012 4 comments:

London's recent embrace of ramen has concentrated mainly on soup noodle dishes served with tonkotsu, a pork bone-based broth. However, there is one exception: Ittenbari, a utilitarian Japanese joint in Soho. According to the menu, its eponymous signature dish, Ittenbari ramen, is served with 'a clear soup made with chicken and vegetable blended with a very rich seafood extract (mussels, scallops, shrimps and bonito)'. 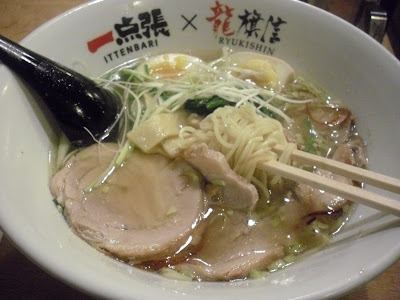 In some ways I wish they hadn't built up my expectations. I was looking forward to a rich broth packed full of flavour. It wasn't. It was quite clean tasting, but it didn't leave much of an impression. Of the toppings, the pork slices were very high quality. So it was a bit of a shame the eggs were just bog-standard rather than the nitamago eggs found in the other ramen shops. And nor was I impressed by the bamboo shoots; they weren't the fermented ones known as menma, just normal bamboo shoots. Like the soup, I can't remember much about the noodles, so I guess they must have been decent enough. 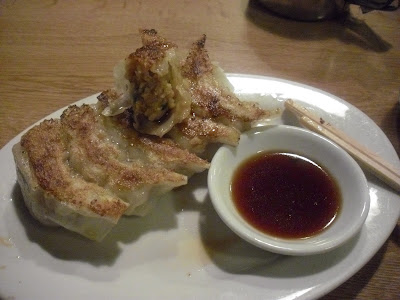 The toppings were quite generous but that's only because I went deluxe, which cost £10.90 compared to £8.90 for the regular (the difference between the two being an extra couple of pork slices and an extra half egg). Come to think of it, with a single slice of pork and half an egg, the regular is a bit of a piss take. Being a growing lad, I also ordered some gyoza (6 pcs/£5). These dumplings were a tad greasy, and didn't seem to be freshly made. That said, I've had worse and they were generously filled.

Now you might be thinking that I'm not a massive fan of Ittenbari, but for all its faults I see myself returning. Why? The ambience is the best of the various ramen bars that have opened in London in the past year. I can't quite put my finger on why I like it so much, but I think it's because it actually reminds me of Japan. So while much more has been spent on the design of Bone Daddies and Tonkotsu, neither of them has quite the same atmosphere Ittenbari has. Mind you, the next time I'll give the noodles a miss and go for some sushi or a chicken katsu curry, instead.