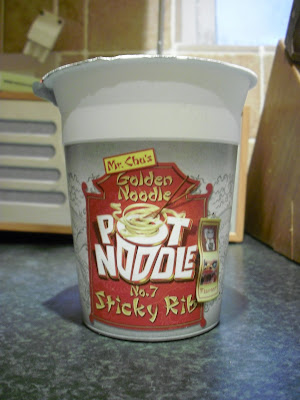 Merry Christmas! I hope you all have a great time over the festive period.

Christmas is very much a time to catch up with friends and family. The weather's been horrid but I'm one of those who consider going to parties around Christmas as essential travel. None more so then a shindig around El Greco and the Mysterious Mrs A's new house.

As is customary, Secret Santa paid a visit and amongst my gifts was a present of Pot Noodle. I've not eaten Pot Noodle in nearly twenty years, and the only previous occasion was when I was given a free sample in a 'survival package' that was presented to me at University by the Student Union. I'm not proud and I know I didn't have to eat it but we all experiment and do stupid things we regret when we're students. 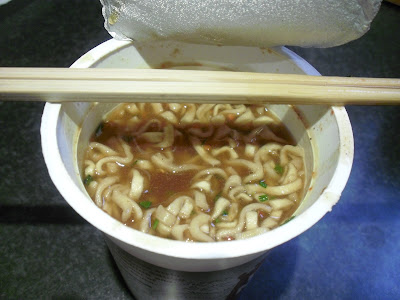 Whilst I can't say I'm a fan of this British noodle institution, I felt I had to do the honours and do a review. After all, a great deal of thought had gone into the choice of flavour, as I was presented with 'Sticky Rib' flavour, which also came with a sachet of Peking sauce.

I duly followed the instructions and filled the pot up to the dotted line with boiling water, carefully removing the sachet of Peking sauce first, and waited. With hindsight, I should have eaten these when drunk or hungover. Being stone cold sober isn't the way to tackle these noodles.

I finished them off though, and whilst I can't recommend Pot Noodle, it is and has been a gateway noodle for generations of Britons. And for that I am thankful, although the real Cup Noodles are far tastier.