When it comes to starters in a Chinese restaurant, many diners look no further than No.1 on the menu: the ubiquitous mixed starter platter. This usually consists of sesame prawn toast, seaweed, spring rolls, spare ribs and something else from the freezer which has been deep-fried. I'm not that much of a food snob to deny that these snacks have their charms, but they are a bit boring. Especially after they've been ordered for the thousandth time.

So what are the alternatives? Well, personally, my starter of choice is steamed scallops with glass noodles 粉絲蒸帶子. Like many Cantonese classics, it's relatively simple to prepare and cook. So much so, even a kitchen-numpty like me can manage to rustle it up. 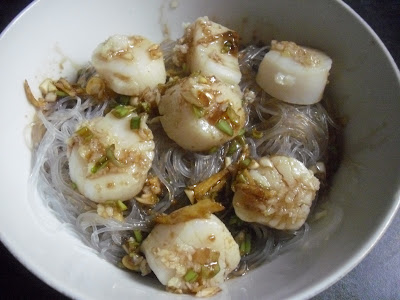 In restaurants, this dish is usually served with the scallop on the half-shell, but I couldn't find any so I used scallops off the shell. My recipe is for a portion that can be served as a light meal (with a side of greens), or as a starter to share between two. It can, of course, be scaled up accordingly. 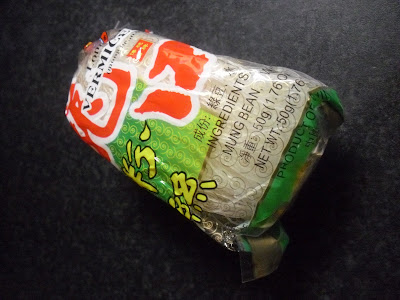 Soak 50g of glass noodles aka mung-bean vermicelli (粉絲 fensi) in a bowl of hot, but not boiling, water for about 15 minutes to soften. I use the Longkou (龍口) brand, which can be found in handy multipacks of 50g bags (Londoners, these can be found at SeeWoo on Lisle St in Chinatown). 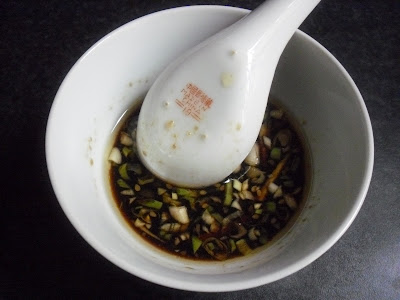 As the noodles are soaking, prepare the soy-based dressing with the following ingredients:

To give it a bit of a kick, I added some chilli oil and prickly oil. However, if you don't like it hot then these can be omitted. 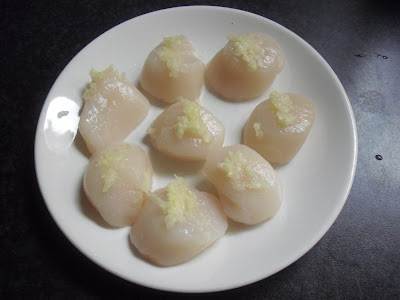 Next, mince some garlic to put on top of the scallops. Steam the scallops for around two minutes (the optimal cooking time depends on the size of the scallops and the kind of steaming equipment that you're using). 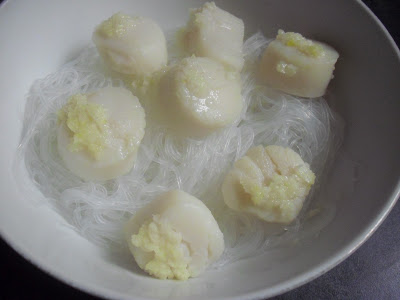 Lastly, spoon some dressing over the scallops and the noodles to your taste (any leftover dressing can be kept in the fridge for a day or so). The observant among you will have noticed there were eight raw scallops but only seven in the final dish. That's because I ate one to test whether it had cooked through. So when preparing this dish, it might be worth your while to throw in an extra scallop or two!

It's been a long time since I've posted a recipe on the blog. That's not a surprise, as I'm not exactly a wizard in the kitchen. However, from time to time, I get a little inspiration. In this instance, from a brioche and marmalade dessert that rounded off a rather splendid meal at The Ten Bells (I have to say The Young Turks are pretty damn good). 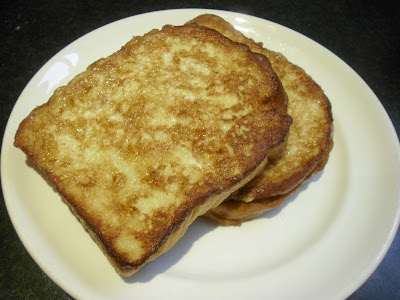 Now I'm not saying that my creation is better than The Young Turks' efforts, but it's certainly more sinful! After all, there are few things that aren't improved by dipping in egg and frying in oil. So without further ado, I present my brioche French toast marmalade sandwich – ideal for brunch or dessert. 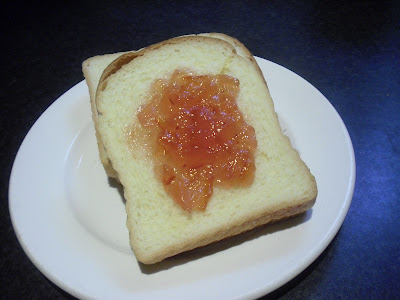 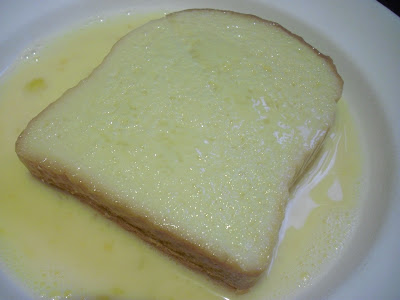 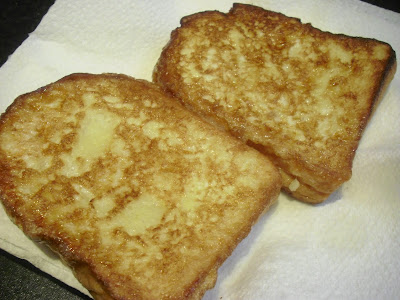 Shallow-fry the sandwiches over medium heat until golden brown on both sides. Drain on kitchen paper before serving. 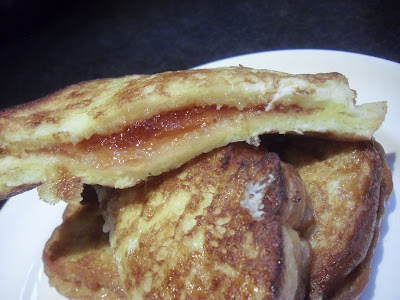 You don't have to cut it in half, but I just wanted to show off the oozy warmed-up marmalade filling.

Serving Suggestions
If you want to go all trendy (or impress a boy/girl) then you can sprinkle some icing sugar on top, and serve with some fruit; mandarin segments and berries would go well on the side. However, if you want go the full Homer Simpson then serve with butter (for brunch) or a scoop of ice cream (for dessert).

I don't want to blow my own trumpet but I'm pretty chuffed with this dish. Who knows? Perhaps I'll get round to posting some more recipes!
Posted by Mr Noodles at Thursday, February 16, 2012 10 comments: 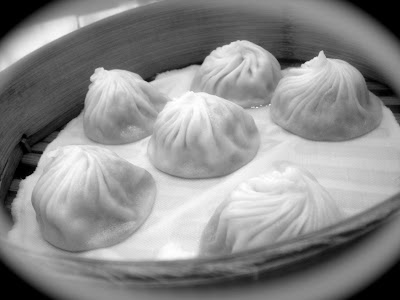 I was going to launch my new blog next week, but so many of you have been asking about my campaign to bring Din Tai Fung 鼎泰豐 to London, I've brought it forward. So without further ado, please visit my new petition-cum-blog: Din Tai Fung London Fan Club and leave a loving comment!
Posted by Mr Noodles at Friday, February 10, 2012 2 comments:

In common with many restaurant chains, it's very easy to have a pop at Ping Pong. So I'm going to start my review with a few positives. The branch I visited (on Great Marlborough Street) is stylish and buzzy. The menu is well presented with a 'dummies guide to dim sum' and brief descriptions of all the dishes. In addition to the à la carte, there are also set menus that enable solo diners/small groups to sample a wide variety of dim sum. And I have nothing but praise for the efficient and friendly service. So far, so good, but just how far can a restaurant go on style without substance? Well let's find out.

As I was dining alone (I took it for granted I couldn't persuade anyone to join me at Ping Pong), I went for the Ping Pong Collection (£9.95) in order to try out ten different dim sum. The baked/fried dim sum came out first, and my first impressions were that the spring rolls were stingily filled and a bit 'supermarket'. Of these, the crispy duck one was the pick of the bunch, whilst the less said about the Vietnamese rice paper prawn roll and mixed vegetable spring roll, the better. In contrast, I liked the roast pork puff, which had a well-seasoned filling enveloped in a crisp pastry.

As mediocre as the spring rolls were, they were positively stunning when compared to the steamed selection. In general, the dumpling wrappers were too thick and had a claggy texture whilst the fillings were underseasoned. Moving onto the dumplings individually, the shortcomings were myriad. The har gau (prawn dumpling) was so overcooked that the wrapper fell away from the prawn upon picking it up with chopsticks. The fillings in the chicken & cashew nut dumpling and spicy vegetable dumpling were too grainy.

I haven't finished yet! The green chive dumpling did contain prawns as promised, but there were no chives, just a load of other random filler. The chicken shu mai (sic) was a bit dry, which is why this open-topped dumpling is usually made with fatty pork to give it a juicy quality. And to cap it all off, the vegetable sticky rice was bland and stodgy. In short, this bamboo steamer represented the Room 101 of dim sum.

As I feared the Ping Pong Collection might not sate my appetite, I also ordered a portion of cha sui bao (sic). I actually enjoyed these, as the buns were nice and fluffy and the filling (the same as the roast pork puff) was well seasoned. However, in comparison to other Chinese restaurants, £2.99 for two buns is a bit of a rip-off when most places serve three for a similar price.

To drink, I went for vintage pu-erh tea (£2.25). This was high quality stuff, but it was served in a glass. This meant no refills, and as the glass had no handle and I don't have Teflon hands, it was very tricky to drink. In total, the bill came to £17.38 including 12.5% service. Whilst not exactly exorbitant, there are loads of places where you can eat more and better dim sum for the same price.

Two, maybe three, acceptable dim sum out of eleven is pretty lamentable, and the food was as poor as I remembered from my previous visit to Ping Pong a few years ago. This is a pity, as there's definitely a niche in the market for an accessible quality eatery to attract those who might not otherwise check out dim sum the old school way. In fact, there is a risk that some are put off dim sum altogether by Ping Pong. And that really would be a crying shame.

But let's not single out Ping Pong, or even chain restaurants for that matter. Other cities have top quality chains that I'd love to see in London. Just imagine if instead of Ping Pong, we could eat dumplings from Din Tai Fung and wouldn't it be great if we could slurp noodles at Ippudo instead of Wagamama? We can dream, but as long as Londoners settle for second-rate crap, they will be locked in the chains that they deserve. Or to put it in the words of some Welsh blokes: IF YOU TOLERATE THIS YOUR CHILDREN WILL BE NEXT.

PS: Do check out my Dim Sum in London guide for restaurants that are the real deal.
Posted by Mr Noodles at Sunday, February 05, 2012 28 comments: 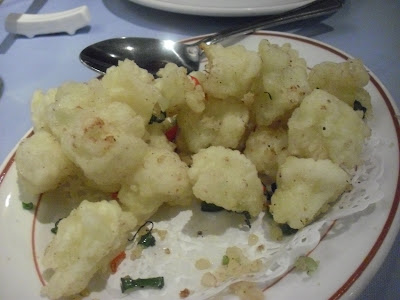 I'm not a big fan of cauliflower, but I am a big fan of cauliflower Ming-style as served by YMing. Here the much-maligned vegetable is magically transformed from ugly frog to handsome prince by being deep-fried in a light batter then tossed with chilli and salt. Delicious.
Posted by Mr Noodles at Thursday, February 02, 2012 3 comments: