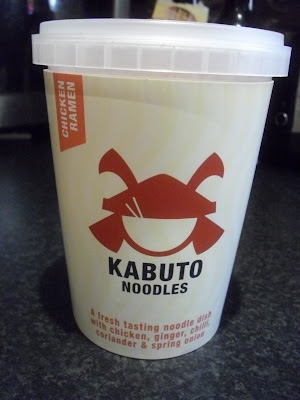 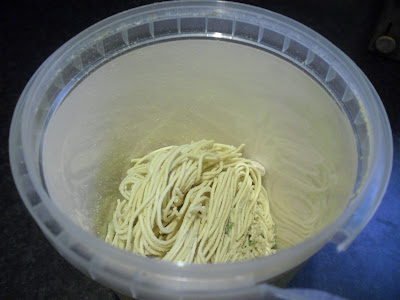 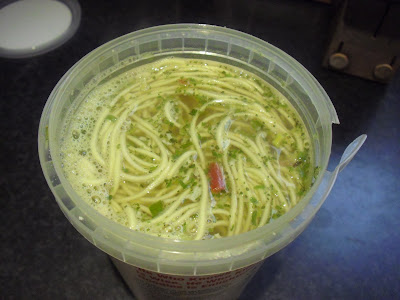 The concept of adding boiling water to dehydrated noodles and seasonings isn't new, but Kabuto are aiming for a more upmarket image than that of the infamous Pot Noodle. I guess their competitors are the instant noodle pots from East Asia such as Cup Noodles.

I liked the chicken ramen. It had a surprisingly natural tasting soup, with a nice depth from the ginger and a pleasing hint of chilli. Along with the coriander and spring onion, the soup had a somewhat South East Asian flavour rather than the Japanese taste I was expecting. The noodles, a Chinese-style egg noodle rather than Japanese-style ramen, were decent quality. If I were to be ultra-critical, I would've preferred slightly thicker springier noodles.

I also tried the beef pho, and again the soup had a nice depth from the ginger and a pleasing hint of chilli. The addition of garlic was welcome, and I could also pick out some cinnamon. However, there was something missing. The soup lacked that perfumed aniseed punch that star anise provides. Its absence was profoundly felt, as pho (and indeed beef noodle soups in general) should always be made with a stock containing star anise.

My other gripe was the presence of sweetcorn. Not only did it seem out of place but it also didn't hydrate sufficiently. And those of you expecting slippery rice noodles, you'll also be disappointed as the same noodles used in the chicken ramen feature in the pho. Nothing wrong with these noodles, but pho should be made with the proper rice noodles. That said, I can come across as the Lynne Truss of the noodle-world, and most of you probably couldn't give a toss about the noodle used.

Of the two flavours I've tried (I haven't got round to trying the miso yet) I prefer the chicken ramen. I would even go so far to say that it would hold its own against many of the East Asian brands. However, even allowing for the fact that Kabuto Noodles is a premium product, I'm not sure I'd fork out £2.95 for a pot (Waitrose Online) or £17.70 for a six-pack (Amazon). Not when you can pick up some instant noodle pots from a Chinese supermarket for a fraction of the price.

I received a free sample of Kabuto Noodles from their PR peeps.
Posted by Mr Noodles at Saturday, January 28, 2012 15 comments:

I was getting anxious. The same set of dim sum trolleys had gone past our table twice yet there was still no sign of my beloved har gau (蝦餃). Don't get me wrong, I was enjoying a post-Christmas lunch with my folks at Manchester's Glamorous Restaurant, but the thing is dim sum isn't dim sum without these superior prawn dumplings.

A waitress walked by our table. I asked her to send the har gau trolley our way. Her response that there was no trolley nearly sent me over the edge. Calm was only restored after she explained that har gau had to be ordered separately, as they can get a little tired sweating away in a trolley. Not for the first time, I realised just how much I take some old favourites for granted.

Har gau translated into English simply means prawn dumpling. Typically, this dumpling consists of prawns seasoned with soy, white pepper and sesame oil in a pleated wrapper made with wheat flour and tapioca flour. These are then cooked and served in a bamboo steamer, usually consisting of four dumplings in a portion.

It really goes without saying that the quality of har gau is a benchmark of how good a restaurant is for dim sum. However, there are restaurants that sell har gau but don't do a full dim sum service. I'd be wary of such places, as there's a high probability that the dumplings are from a packet out of the freezer. Some of these can be OK, but they're rarely as good as freshly-made har gau.

What makes good har gau?
In my opinion, these are the things to look out for:

1) The wrapper – this must be thin enough that it's translucent yet not so delicate that it will easily break. The number of pleats is also important, the more the better (around ten shows proper skill).

2) The filling – the prawns should be coarsely chopped rather than finely minced. The filling should also retain a good 'bite' and not be mushy.

3) Bamboo shoots - good har gau should include a few slivers of bamboo shoots for a contrast in texture and flavour. Sadly, all too many restaurants don't bother nowadays.

Where's the best place for har gau?
In London, my favourite is Phoenix Palace, where they also serve har gau with a twist in the form of wasabi prawn dumplings (日式芥辣蝦餃). I don't often advocate dicking around with a classic, but I love the kick from the wasabi inside the dumpling.

Outside of London, I'm afraid my list isn't as comprehensive as it should be. Like I mentioned before, I've been taking har gau for granted for far too long. Having said that, I do remember the har gau at Lei Garden in Singapore being different class (see first photo).

Can I make har gau at home?
It is possible, but it takes a lot of effort. For starters, you need to get in the right kind of wheat flour and tapioca flour from a Chinese supermarket. My Mum made some over Christmas, and they were tasty but I didn't ask for a recipe (it's not as if I'm ever going to make them!). However, if you do want to try making har gau, check out Sunflower Food Galore's recipe.

And lastly, do shout if you know of a restaurant that serves good har gau. It doesn't have to be in London, it can be anywhere in the world. I don't care as long as it's good!

PS: I haven't forgotten! Kung Hei Fat Choi! Gong Xi Fa Cai! 恭喜發財! I'd like to wish my readers all the very best for the Year of the Dragon!
Posted by Mr Noodles at Monday, January 23, 2012 15 comments:

Even Better Than The Main Course: Gold Mine's Chilli Oil 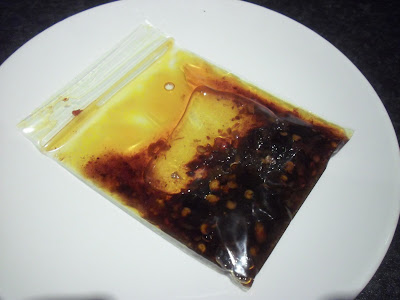 I'm a big fan of Gold Mine. Like many devotees, I love its Cantonese BBQ, which I often order to take-away. And when doing so, I always make sure that a little sachet of chilli oil (辣椒油 lajiaoyou) is popped into the carrier bag. Because, in all honesty, I think I love Gold Mine's chilli oil more than I do its food!

And on this riff, can you think of any other restaurants where the supporting act upstages the supposed signature dish?

Is It Me? Or Is Granger & Co Bloody Expensive? 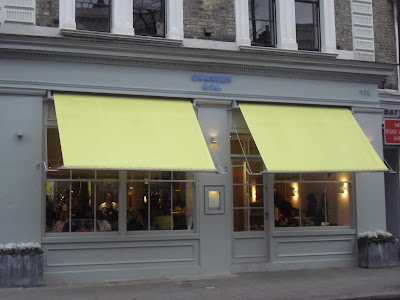 After a stressful, and ultimately unsuccessful, Christmas shopping trip to High Street Kensington, I hopped on a bus to nearby Notting Hill for a late lunch at Granger & Co. This casual all-day eatery is the brainchild of Aussie chef, Bill Granger, who has an awesome (forgive my slip into Antipodean vernacular) reputation. Not only has he opened popular restaurants in his homeland and Japan, but he's also published acclaimed cookbooks, and appeared on the telly. 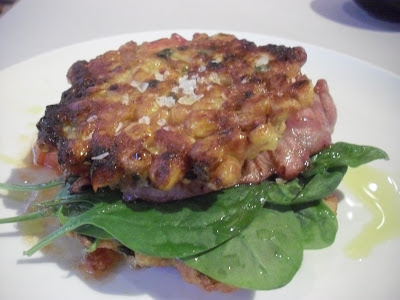 I had heard good things about the sweetcorn fritters (£11.90), and I promptly ordered this dish along with a side portion of avocado salsa (£2.40). Now I know I was in posh Notting Hill, but I thought that spending nearly £15 would get me more than two sweetcorn fritters, two small roast tomatoes, a single rasher of bacon, a few spinach leaves and a few chunks of avocado. Given the price and portion size, the food really had to sing. It didn't. Whilst the overall combination worked, the fritters were a tad underseasoned and a bit burnt at the edges. On the plus side, the roast tomatoes were packed full of flavour. 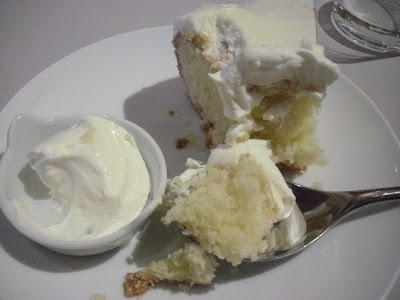 I was still starving so I ordered some lemon cake (£4), which was, in fairness, bloody delicious. So much so, I temporarily forgot that I was a victim of daylight robbery. In total, I spent £23.40 (including 12.5% service) on two courses and a coffee. If I'd ordered a beer or a glass of wine then the price would’ve easily crept up to around the £30 mark. 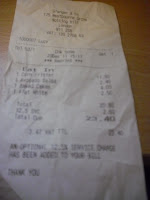 Now some of you are probably thinking that these are Notting Hill prices, and I should stop bloody moaning. I would be inclined to agree with this point of view if Granger & Co wasn't a casual, drop-in, no bookings eatery. But it is, and if I'm going to spend this kind of money then I'd much rather do so at a proper restaurant. Somewhere like Launceston Place (in nearby Kensington) that does a three-course set lunch for £23. Come to think of it, the set lunch at The Ledbury, Notting Hill's finest, is only £30.

And at risk of banging on about how much of a rip-off this place is, the menu is studded with overpriced dishes. Piss-taker in chief has to be the Full Aussie breakfast (£13.25), which costs more than the Full English (£12) at Hawksmoor. And based on my experiences at these two places, I'd much rather go to Hawksmoor. In my opinion, if you want to check out Aussie-style casual dining then you'd be much better off going to somewhere like Lantana, where the sweetcorn fritters cost less than a tenner, and prices are generally 20-25% cheaper than Granger & Co.

I know I've had a bit of a rant about this joint (and I've not even mentioned the bipolar inattentive/enthusiastic service 'til now) but I doubt very much if Bill Granger gives a toss. After all, Granger & Co was pretty busy at 3pm on a Tuesday. However, just because there are some people willing to pay an arm and leg to eat there doesn't mean I have to.

I must admit that I'd largely given up on my campaign to bring legendary purveyors of xiao long bao 小籠包, Din Tai Fung 鼎泰豐, to London. However, some encouraging words from twitter (and beyond) have put me back on the right path. 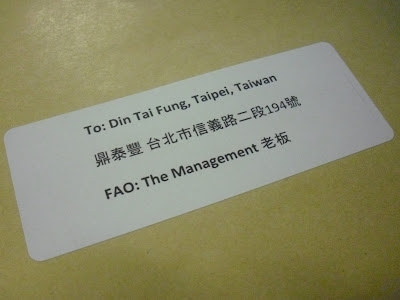 I'd previously left messages on Din Tai Fung's website, but only received boilerplate replies. So this time I decided to up the ante by writing a letter to the company's management in Taiwan. I'm hoping for a more detailed response, and perhaps a glimmer of hope that a restaurant will open in London.

If you want to know what London is missing out on then check out my reviews of the branches in Hong Kong and Shanghai. Other cities lucky enough to be blessed with Din Tai Fung include: Bangkok, Beijing, Jakarta, Kuala Lumpur, Los Angeles, Osaka, Seattle, Seoul, Singapore, Sydney, Taipei and Tokyo.
Posted by Mr Noodles at Tuesday, January 10, 2012 26 comments: