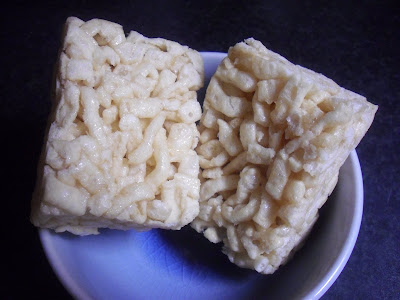 After my recent dim sum feast at Croydon's Tai Tung, I popped into the adjacent Wing Yip supermarket to do some food shopping. Whilst stocking up on bits and bobs, I clapped eyes on an old childhood favourite: ma zai 馬仔, which roughly translates as 'little horse'. 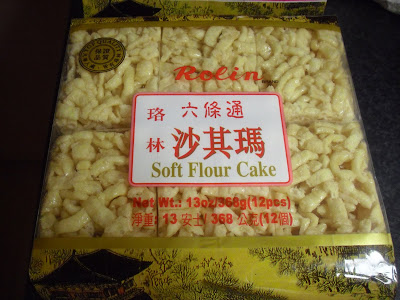 It's also known in Chinese as sha kei ma 沙琪瑪 or saat kei ma 薩其馬, and there are various English translations such as 'Soft Flour Cake'. Ma zai consists of little bits of 'batter' made of flour, egg and sugar binded together in squares with maltose syrup. The end result is a sweet chewy sticky eggy snack. 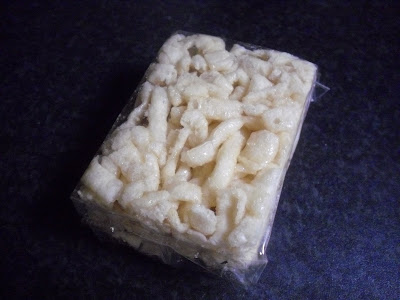 It's been a while since I last had ma zai, and I was overjoyed that this version was a good 'un. I was at once transported back to the 1980’s when my Mum would buy it as a treat for us pesky kids whenever she went shopping in Manchester's Chinatown.

Nowadays, ma zai comes in cellophane-wrapped individual portions, but when I was little, it would come as one giant cake from which you tore off a square. Inevitably, there would be much sibling bickering as to who snaffled the last one. Hand on heart, it was never me. Honest.
Posted by Mr Noodles at Friday, September 30, 2011 6 comments: 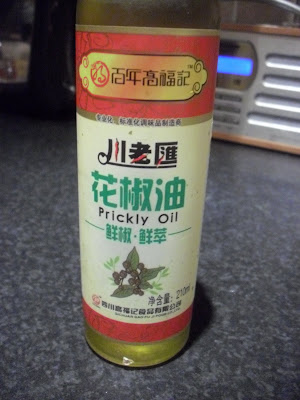 What is prickly oil? It's a mix of rapeseed oil (88%) and Sichuan pepper (12%). There aren't any actual Sichuan peppercorns in the oil, and I guess a chemical process beyond my understanding has somehow extracted the numbing heat of Sichuan pepper into oil form. It is potent stuff and I love it. So, what's the best way to use prickly oil? Well, there's a reason why I'm called Mr Noodles, which is why I used it in a knockout dressing for noodles! 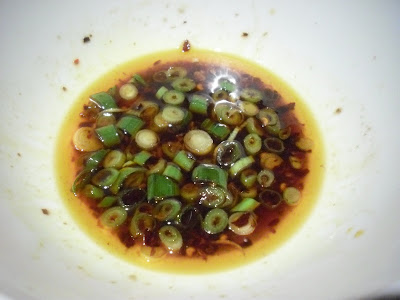 2) Finely chop the spring onion and add to the bowl. Give it a stir.

3) Add prickly oil (little by little). Give it another stir.

I hate measurements when it comes to stuff like this. This is food we're talking about, not a chemistry practical. Just mix the ingredients to your own taste, but do take care when adding the prickly oil – a few drops go a long way. 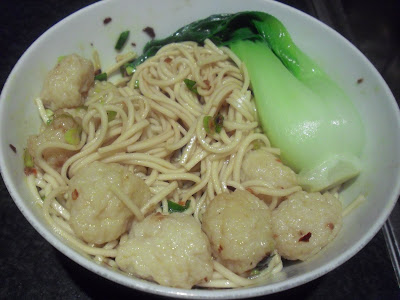 Serving Suggestion
In the above photo, I tossed some Shanghai noodles (上海麵) and fishballs in the dressing before garnishing with some pak choi. As well as noodles, I reckon this versatile dressing would go brilliantly with dumplings.

Where can I buy prickly oil?
I bought this bottle of prickly oil at Wing Yip in Croydon but do let me know if you see it stocked elsewhere. And as Dean (see comments) points out, you can also get this oil at the Chinatown branch of SeeWoo, where it's called Sichuan Hanyuan Pepper Oil.
Posted by Mr Noodles at Sunday, September 25, 2011 17 comments:

This is my blog's 200th post. It's taken a little over two years to reach this milestone, during which time it has featured:

You can tell a lot from numbers. From the above, you can probably guess that I live in London, like Chinese food (especially noodles) and travel a fair bit. Oh, and that I really ought to cook more!

I must confess I'm finding blogging harder than I used to. After all, it's taken longer to write the second century of posts than the first. But that's not to say I'm giving up on the blog, it's just that I'm slowing down. I hope you understand.

I'd also like to take this opportunity to say thanks to all my readers. In particular, those of you who have left comments - I'm not sure I would've made it to 200 posts without your support.
Posted by Mr Noodles at Wednesday, September 21, 2011 13 comments:

Email ThisBlogThis!Share to TwitterShare to FacebookShare to Pinterest
Labels: Blogs 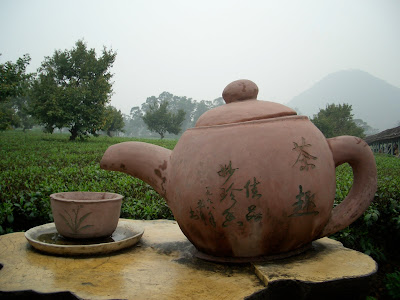 About 140km north of Guangzhou lies Yingde (英德), which is famous for its 'red tea' (紅茶). Although called 'red tea' by the Chinese, this is what we know as black tea in English i.e. the stuff found in PG Tips et al.
Posted by Mr Noodles at Friday, September 16, 2011 3 comments:

I will go anywhere for good dim sum. Even Croydon. That's a cheap shot, given that this much-maligned London borough is home to a Chinese shopping centre anchored by a Wing Yip supermarket. Also within this shopping centre is Tai Tung, a restaurant that serves dim sum.

Tai Tung's dim sum selection is very old-fashioned; this isn't the kind of place to discover new-fangled fusion creations or chef's specials. Not that there's anything wrong with that, as there's a lot to be said for sticking to the classics. In terms of the fried and baked offerings, they weren't greasy and were more than competent. My only complaint was that the filling in the cha siu pork puff (叉燒酥) was a bit too sweet.

The steamed stuff was just as good, with decent har gau prawn dumplings (蝦餃), the benchmark by which all dim sum joints are judged. Generously filled scallop dumplings (帶子餃) and a very traditional dish of fish balls & turnip (魚蛋豬皮蘿蔔) also hit the spot. Although, some might be put off by the pig skin that is served with the latter!

The rest? I enjoyed the freshly made king prawn cheung fun (鮮蝦腸粉) but a bowl of wonton noodles (雲吞麺) let the side down. The wontons were fine but the noodles lacked bounce and were ever so slightly overcooked. We didn't order any Cantonese BBQ but I will next time, as a take-away portion of roast duck (燒鴨) proved to be first class.

Service was efficient and the damage came to £42 for nine dim sum dishes, a bowl of wonton noodles, tea and service – a mere £14/head. When ordering, don't be intimidated by the Chinese language-only dim sum ticksheet, as the numbers on it match up to a bilingual menu. The décor isn't going to win any design awards but I don't think the clientele really care.

However, words can't really convey the way I feel about Tai Tung. The thing is as I get older, I find myself getting increasingly nostalgic and sentimental (cue wistful Oasis B-side) and there was something about this restaurant's old school charm that touched my heart. And it wasn't just me; all around the dining room was the sight of friends and families, old and young, all having a great time. Or as the Chinese might say: 高興熱鬧, which is what dim sum is all about. So if you can get to Croydon easily then do pop into Tai Tung.

Earlier in this post I alluded to Tai Tung's dim sum selection as being old fashioned. That was an observation, not a criticism. However, being the foodie trainspotter that I am, I do like to check out the latest trends in dim sum.

One place in London that serves innovative dim sum is a new favourite haunt of mine: Princess Garden of Mayfair. In particular, they offer miniature Cantonese buns such as baked cha siu bao (叉燒餐包仔) and baked custard buns (lai wong bolo bao 奶黃菠蘿包) that are very much in vogue in Hong Kong.

I'm pleased to report that the buns didn't disappoint, both were oven fresh and had tasty fillings. I preferred the porky cha siu bao but I also loved the custard bun, especially its cookie-esque topping (called pineapple-style in Chinese, as it resembles the outside of a pineapple). Incidentally, if you like the look of these buns then man-sized versions are available at Chinese bakeries. However, I've yet to see the miniatures anywhere in London other than Princess Garden.

For a review covering my first couple of visits to Princess Garden, please click here.
Posted by Mr Noodles at Friday, September 09, 2011 7 comments:

In my humble opinion, food is at its best when it's at its simplest. And that's why I'm a big fan of places like Paté Paté in Copenhagen. So how did I find out about this place? Through the medium of Twitter, where @meemalee answered my SOS for restaurant tips in the Danish capital. 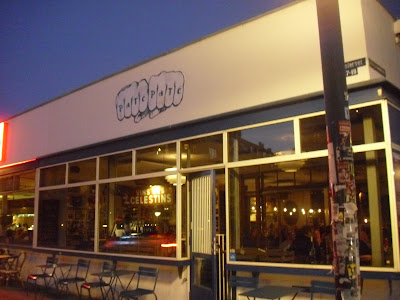 It was just as well that I had Paté Paté as back-up, given that my original plan to visit Noma fell through. I mean, who would've thought that you'd need to reserve a table on a school night? For God's sake, you'd think Noma has pretensions to be the best restaurant in the world! (note to slow people, I am taking the piss). 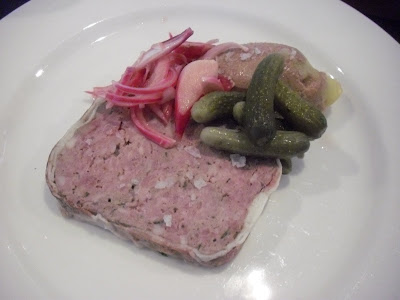 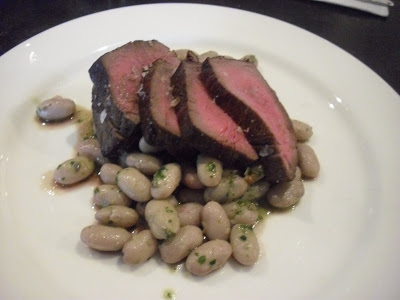 There's not much to say about simple dishes like two terrines w/pickles and roast veal w/borlotti beans & salsa verde. Suffice to say they were of high quality and perfectly executed. The terrines were at room temperature, which I much prefer to the 'straight from the fridge' chill that afflicts many inferior versions. The veal was perfectly done, with a nice crust on the outside whilst still tender within. If I'm being honest, the beans got a bit samey after a while but I adored the salsa verde, as it added a tart quality to this dish. Portions were very generous so there was (sadly) no room for dessert.

I also liked the fact that I could eat at the bar (I was on solo business dining detail) and drink decent wine by the glass. The ambience was excellent, and the boho-chic vibe just erred on the right side of not being hipster-toss. It isn't cheap but then again few things are in Copenhagen, a city that makes London seem good value. In short, highly recommended.

Thanks again, @meemalee - I've finally come round to loving Twitter! Oh, and one more thing, apologies to Stanley Kubrick.