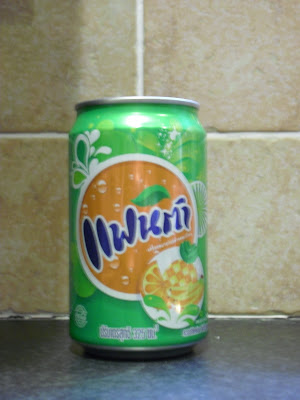 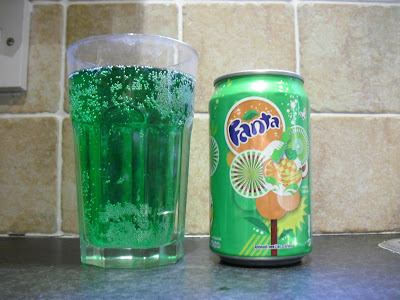 As you may have gathered from my last post, I really enjoyed dinner at 101 Thai Kitchen. Whilst we drank wine and beer with our meal, we noticed that the Thai couple at the adjacent table were knocking back can after can of Fanta. Not just any old Fanta but 'green' Fanta imported from Thailand. I was intrigued and I just had to buy a can to take home with me. As there were pictures of pineapple, banana and orange on the can, I thought this was a mixed fruit drink but when talking to the waitress, she explained that it was more like cream soda.

Now I reckon this drink could well be illegal ! The high sugar levels and excessive use of artificial colouring must be breaking some kind of law somewhere. It's hard to pinpoint the flavour and I guess bubblegum or cough medicine is the best description I can think of. Of the fruits pictured on the can, I could detect only a hint of banana.

As well as 'green' Fanta, the waitress told me that they also stock 'red' Fanta but had sold out that night. Having mistaken my look of bewilderment for one of disappointment, the waitress reassured me that I could buy both types of Fanta at the nearby Thai Smile supermarket in the morning. I tried to explain that it was OK but it was too late. She so had me down as some kind of weirdo Fanta-spotter.

Mind you, she might have a point as drinks like Thai Fanta do interest me. So if you've spotted any imports of seemingly familiar drinks then do let me know. It doesn't have to be soft drinks, for example I'm wondering where you can get Nigerian Guinness in London.