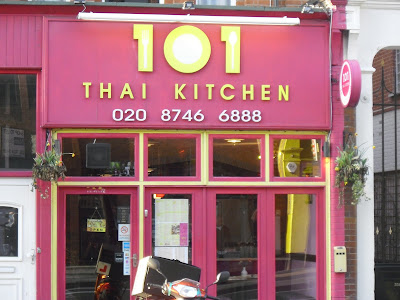 What's the best Thai restaurant in London ? If the Michelin guide is anything to go by then it's the one-star Nahm in the Halkin Hotel. But really what does a fat white bloke know about Thai food ? The 2010 Time Out Eating & Drinking guide isn't much help either as they seem to think Busaba Eathai is worthy of one of their coveted red stars. Come on now, that's a bit like saying you like indie music before revealing your favourite bands to be Snow Patrol and Razorlight. 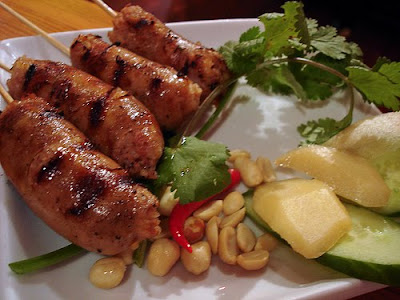 Isaan sausages - photo courtesy of Su-Lin, Tamarind and Thyme
Surprisingly, there's also very little consensus on the blogosphere but having read Su-Lin's write-up, I got the distinct impression that 101 Thai Kitchen was a contender. Further positive reviews by Bellaphon and Sharmila reinforced this opinion and I'm very surprised that more bloggers haven't made the pilgrimage to Hammersmith.

As my friends, Mr Fussy and Fush 'N' Chups are Hammersmith locals, they were happy to come here for dinner. Also joining us were Dark Side and Miss Bolshy. There are few outward signs that this restaurant is special and Fush 'N' Chups admitted that she had previously dismissed this casual canteen-like eatery because of its garish exterior (BTW - I didn't realise Kiwis could be such snobs!).

The interior is similarly lurid but the first thing that struck us when we arrived was the large number of Thai diners, which we took to be a good sign. Mind you, as the evening wore on, Mr Fussy noted that the clientele became less Thai and more farang. I was quietly pleased at how Mr Fussy had adopted the esprit de blog, as he was also the first to notice that the prawn crackers were of the posher and spicier variety. 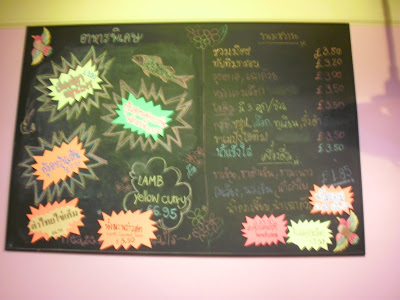 As well as the usual Thai staples, this restaurant specialises in the respective home cuisines of its co-owners, namely the Lao-influenced cuisine of the Isaan region and Muslim dishes from the south of the country. There's also a specials board mainly written in Thai although many of these dishes are translated into English on the inside front cover of the individual menus. There were far too many interesting options and I found it very difficult to narrow down my choices.

From the wide selection of snacks and soups, I went for the poh tak soup (£4.25) to start. This is a cleaner alternative to the ubiquitous tom yum but no less tasty with generous amounts of seafood in a hot and sour broth. The soups are available as small or large with the latter being ample for three to four diners. 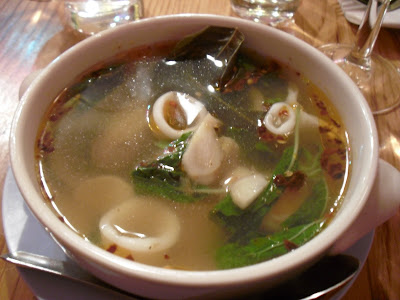 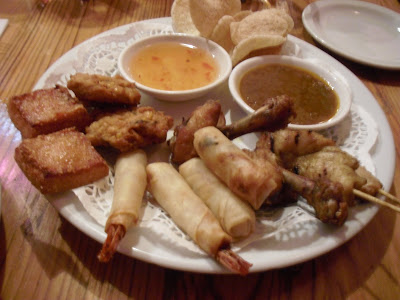 My friends kicked off with 101 Ways to Heaven (£7.25), a selection of spring rolls, chicken satay, king prawns in pastry, prawn toast, chicken wings w/lemongrass and sweetcorn cakes. They thought these snacks were a tad generic and predictable. Now I don't want to be an arse about this but they didn't need to order two platters to find that out. I mean what the hell did they expect ? A new take on prawn toast ? With hindsight, they would've been better off starting with soup or with individual dishes like steamed mussels. Another option would be to kick off by sharing one of the salads or grills. 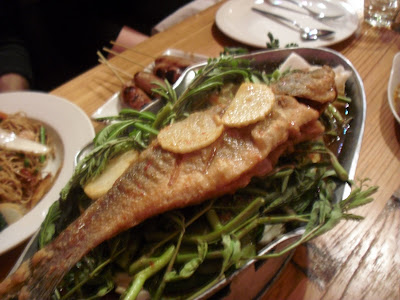 Onto the mains and the undoubted star was my sea bass 'sour curry' hot pot (£9.95) – a fried sea bass served with morning glory, water mimosa and radish in a hot and sour curry. This dish was presented in a fish shaped dish atop a mini cooker. Whilst the fish was fully cooked, the vegetables were cooked at the table absorbing the flavours of the curry. The addictive almost soup-like tamarind based curry was out of this world and everyone dived in for a taste during the meal. 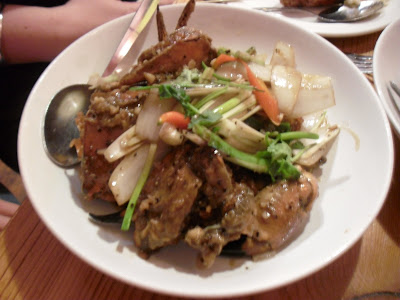 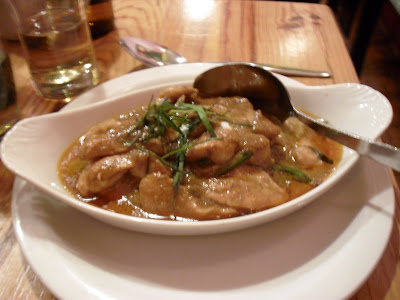 We didn't really share mains but I stepped into the breach when Fush 'N' Chups needed a bit of help to finish off her pepper crab (£8.95). This was tasty with the pepper complementing the sweet crab but if I was choosing, I might have gone for the garlic crab or curried crab instead. Miss Bolshy went for a chicken panang curry (£6.25) that evoked memories of her travels in Chiang Mai. I had a taste of the curry sauce, which was rich and spicy although Miss B thought it became too salty as it cooled. 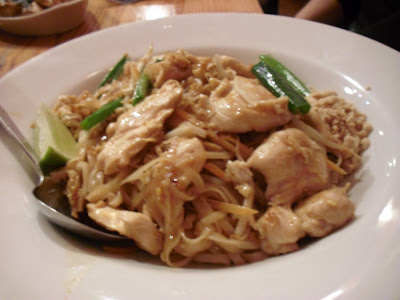 Both Dark Side and Mr Fussy chose noodles and they went for pad thai w/chicken (£6.25) and pad kee mow w/chicken (£6.50) respectively. I tasted some of the former and thought it was better than most versions served in London. I felt a bit bad that I was merrily tucking into other people's dishes so I didn't try Mr Fussy's spicy fried yellow noodles. Mind you, they were sure to be a winner if they tasted half as good as they smelled.

We also ordered a few side dishes to share including the legendary Isaan sausages (£6.25). These were every bit as good as I hoped with a strong lemongrassy flavour. We also enjoyed the screaming nun (£6.25) – battered aubergine with a spicy sauce. Whilst the batter was a tad indelicate, the sauce was very special with the liquorice notes from the Thai basil lifting it to another level. There's also a quiet nun that pairs up battered aubergine with red curry. I can't remember much about the pad pak boong (£6.25) – stir-fried morning glory but I guess this was fine too. This just about finished us off and we had no room for desserts.

If I was being ultra critical, I could moan about the tiny wine glasses and the time it took for the coconut rice to arrive. That said, this isn't really a place for wine buffs and they didn't charge for the late arriving rice. In fact the service was pretty decent considering it was a busy Saturday night. This was largely due to our super helpful waitress as we did notice that some of the other staff were a bit mardy.
Our bill came to £120 for five people including a couple of bottles of Aussie Chardonnay, a beer and a tip. It was a bargain and I think you'd struggle to spend more than £25/head given that the most expensive dish on the menu costs less than a tenner.
Verdict: Irrespective of whether it's London's best Thai or not, 101 Thai Kitchen is an authentic restaurant of rare quality. I'll definitely be back to work my way through their menu.
Other Stuff: The drinks list includes soft drinks specially imported from Thailand including Red Bull-like energy drinks and different kinds of Fanta.