How To Order Dim Sum - The Pearl Liang Way 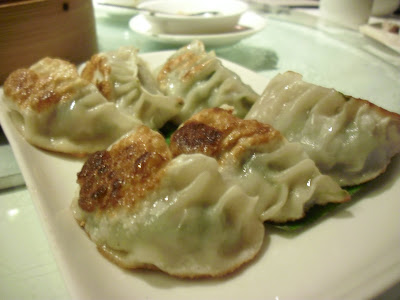 This post was going to be a review of Pearl Liang but enough bloggers and critics have already written about this restaurant. Suffice to say, I agree with the consensus that its dim sum is amongst London's best. The only reason why I don't come here more often is that all other things being equal, I prefer the ambience at Phoenix Palace.
Instead, this is going to be a guide on 'how to order dim sum' based on a recent lunch with fellow bloggers, Su-Lin, Krista, Tom and Jen. We decided to come here after Tom and I exchanged e-mails on food in Hong Kong. Tom is moving there and he wanted some expert advice on the local cuisine. Unfortunately, my Dad was unavailable so he had to make do with having lunch with me instead.

A Little Introduction
Dim sum literally means 'to touch the heart' in Cantonese and it refers to the vast selection of small dishes that the Southern Chinese eat for breakfast or lunch. However when you go out to eat dim sum, you'd say we're going to 'yum cha', which means 'drink tea' in Cantonese.

If you're not familiar with dim sum, it can be difficult to gauge what to order and how much to order. Chinese-only or badly translated menus don't help and neither does the fact that there aren't many uniform English names for dishes.

Ordering Strategy
Most dim sum consists of three per portion so it's best to corral a group that's a multiple of three but it doesn't really matter that much as long as you order enough. As a minimum, I'd order three or four dishes per person with a rough 50/50 mix of steamed and non-steamed dim sum. By non-steamed dim sum, I mean deep-fried, baked, pan-fried and grilled snacks. On top of that, I'd order some cheung fun – roughly one portion between two or three usually does the trick.

Being a glutton, I also like to order some Cantonese BBQ and noodles as a side order. Alternatively some prefer fried rice, congee or stir-fried greens. These work better with a big group, as you don't really want to overload on the sides at the expense of the actual dim sum.

For those of you with a sweet tooth, dessert dim sum is also available. You should order these at the end of the session unless you don't mind them being served with the rest of the order. To drink, I go with tea but don't get fobbed off with the house jasmine. A proper dim sum restaurant will have varieties such as pu-er, oolong and my favourite, tieguanyin (Iron Goddess Tea).

The English names of dim sum featured are those used by Pearl Liang and where appropriate, I've included the transliterated Chinese name. This isn't a complete list, as short of printing a menu, I can't include all dim sum. 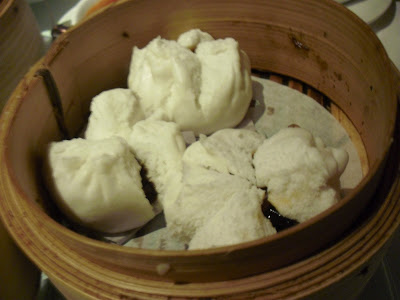 Cha siu bao
Steamed Dim Sum
The Photo - Cha siu bao (honey roasted pork bun), a steamed bun filled with bbq pork in a sweet-savoury sauce. This is one of my favourites and one that Pearl Liang do well although there are some who find this too filling.
The Dumplings - Popular choices include har gau (prawn dumplings), xiao long bao (Shanghai dumplings with pork), pork shu mai and various dumplings that include prawn in some form or another. Top tip is to eat these dumplings as they arrive as they can get claggy when they cool.
Other Stuff - Pork rib in black bean sauce and lor mai fan (mini sticky rice with mix meat in lotus leaf) are popular choices. For the more adventurous, chickens' feet and tripe are also available. 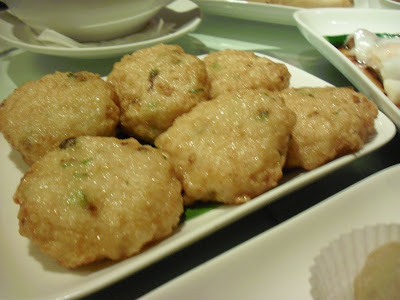 Fried octopus cake
Non-Steamed Dim Sum
The Photo - I love the springy texture of mak yu beng (fried octopus cake). The version here is pretty good with crunchy little jewels of water chestnut and a hint of coriander. It's just a shame that this batch was a bit too salty.
From The Fryer - I try not to overload on the deep fried snacks but there is something moreish about the various croquettes including wu gok and ham sui kok as well as the numerous variations on spring rolls.
Other Stuff - I love grilled dumplings or potstickers and Pearl Liang's fried watercress meat dumpling or xi yan cai jian jiaozi was a superior version. If you like cha siu bao then the same filling can be found in cha siu sao (bbq pork puff) and although I'm not a big fan, lor bak gao (pan-fried turnip cake) is very popular. 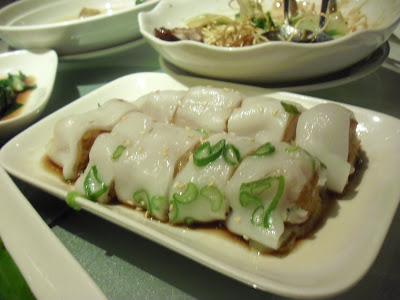 Cheung fun with fried dough stick
Cheung Fun
The Photo - These rice noodle rolls with a variety of fillings are a must order with my favourite being zhaliang (cheung fun filled with fried dough stick). A minor complaint about this particular dish is that the sweet soy based dip is not on the side. On the plus side, this meant we had to finish it off quickly so that the dough stick didn't get soggy.

Other Stuff - I also like prawn cheung fun but in my opinion you should avoid the beef. Most places also serve a special or combination cheung fun with a selection of different fillings. 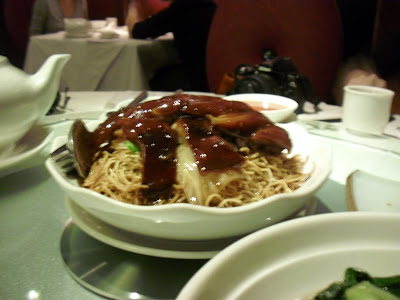 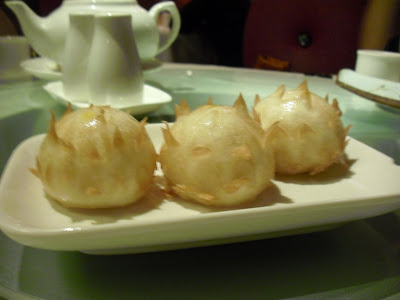 Chrysanthemum custard bun
Desserts
The Photo - Pictured is the stunning chrysanthemum custard bun or guk fa lai wong bao. I could bang on about the contrast in textures between the crispy outer, the fluffy inside and the sweet fragrant custard. But really all you need to know is that it's a must-order. Just remember to ask for the deep fried rather than steamed version.
Other Stuff - Other favourites include egg tarts, mango pudding and black sesame balls, which are also very good here.
How Much Will It Cost ?
At Pearl Liang, prices start from £2.70/dish and our order cost around £18-£19/head including tea and service. This is similar to places like Phoenix Palace and Royal China whilst you could probably get away with spending £15/head in the less salubrious Chinatown joints where prices start from £2/dish. Mind you, I do order big so those of you with lighter appetites can expect to pay £2 or £3 less per head.
If you like to go upmarket, the price ramps up to around £25-£30/head at places like Yauatcha, Hakkasan and Royal China Club. I have no idea what the prices might be at chains like dim t or Ping Pong except that it will cost you an hour or two of your life that you will never get back.
The Last Word
Pearl Liang is as good a place as any to sample dim sum in London. If you want to check out the chip on my shoulder what I look for in a dim sum restaurant then please read this post. And finally, I'd love to hear from you about any dim sum joints that you think I should check out.