I doubt very much if La Rueda on Clapham High St would have appeared on my radar but for the fact that it's one of the few places in London that serves up the Valencian noodle dish, fideuá. This tapas bar is more than a bit old fashioned with a very clichéd Spanish feel about it. It was so clichéd that you could imagine that you were in Spain albeit twenty years ago. Joining me for some tapas y fideuá on a Saturday night out was the Italian Shetland Pony, Dark Side and Miss Bolshy. 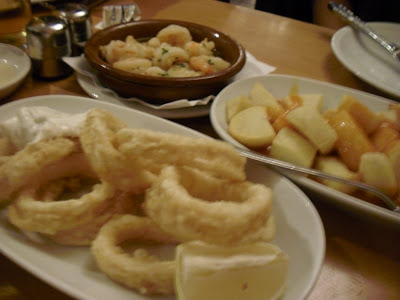 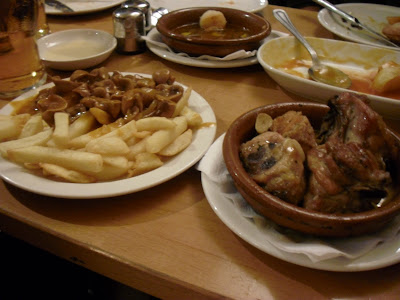 The décor wasn't the only thing retro about this place as our selection of tapas lacked the sophisticated sheen that you find in classier Spanish joints. That said what they lacked in quality, they made up for in quantity. Although as Miss Bolshy pointed out, they could afford to be generous with potatoes. Sadly they weren't as generous with the paprika and an insipid sauce accompanied the patatas bravas.

Of the rest, the seafood was the least worst. The calamares and sardinas a la plancha were passable with the pick of the bunch being the garlicky prawns in the gambas al pil pil. The rinones al jerez (kidneys in sherry sauce) was also OK but the accompaniment of chips puzzled me. There was also nothing wrong with the chorizo iberico but it isn't that hard to arrange some chorizo then wait for it to reach room temperature. I can't remember anything at all about the pollo al ajillo (chicken in garlic) or the empanadillas de atun (mini tuna pasties). 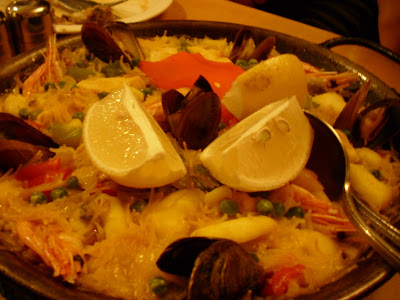 Following the unremarkable tapas was the fideuá, a dish that I have eaten just once before about ten years ago in Barcelona. I was therefore a bit nervous at rating this dish without much of a benchmark to measure it against. Thankfully, Italian Shetland Pony who as a frequent business visitor to Valencia was very familiar with fideuá was in attendance to provide expert opinion.

The fideuá de pollo y marisco included plenty of chicken and seafood. If anything our complaint was that there weren't enough noodles in this dish. Otherwise, it was a tasty moreish dish with the short fideo noodles absorbing the rich flavours of the abundant seafood. The lack of noodles aside, ISP thought it compared well to the fideuá, he had in Spain, although it was a good few years since he last ate it. A winner. 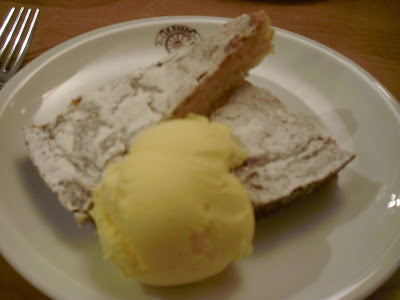 For once, there was room for dessert as I acceded to Miss Bolshy's request not to over order (I think she was still reeling from the ordering at 101 Thai Kitchen). Unfortunately, the desserts were the worse part of the meal; they had an artificial taste and feel and were most likely bought in. The low point was the cheap looking yellow vanilla ice cream (for some inexplicable reason, Dark Side thought it was mango flavour) that came with my tarta de Santiago.

On the plus side, the restaurant was very buzzy and full of large groups having a good time. It was at this moment, I realised that people didn't come here to track down fideuá, they came to carry on partying. In fact being a tapas bar, it's ideal for those groups where some want to carry on boozing whilst others want to eat.
Service was OK although it did deteriorate as the evening wore on as evidenced by a cock-up in the coffee order that left Miss Bolshy without her cappuccino. The cost was a not unreasonable £25/head including a round of drinks and service.

Verdict: Whilst fideuá is rare in London and La Rueda knocks out a decent version, it isn't that good that you'd pay a special visit to this dated tapas bar.
Other Stuff: Birthday parties are well catered for here as they do the whole ‘lights off, cake with candles, waiters’ singing Happy Birthday’ routine.

PS: The search for fideuá continues - please let me know if you spot these Spanish noodles in London.