In many peoples' eyes, dishes like prawn toast, crispy duck, beef in black bean sauce, sweet & sour pork, and egg-fried rice typify Chinese food. Whilst not exactly the real deal, there's nothing wrong with these clichéd crowdpleasers if they're done well but they rarely are.

It's probably these dishes or 'Set Menu A', as they are collectively known as that my friend Fush 'N' Chups had in mind when she confessed that she was indifferent to Chinese food. Sensing that I was about to launch into my 'but this isn't what the Chinese eat' speech, she challenged me to alter her perceptions of my native cuisine.
I duly accepted the challenge and the next step was to find a venue. It would've been easy to fall back on the tried and trusted but I wanted to find a local neighbourhood joint. My eventual choice of Royal China in Putney might seem like cheating but this restaurant is no longer part of the renowned mini-chain bearing the same name.
Now it's been said that I have strong opinions, always believe I'm right, am selectively competitive and a bit of a control freak. So it'll come as no surprise that I was determined to 'win' this challenge. However, my task became a lot tougher than I first anticipated as Mr Fussy was also joining us for dinner.
Whilst Mr Fussy likes Chinese food, there is a vast array of ingredients that are off-limits (the list is very long - from aubergine to zucchini). Suddenly the menu of 300+ dishes seemed a hell of a lot smaller but I managed to cobble together a selection that in principle met with the approval of my fastidious friend.
The Starters
Knowing that Fush 'N' Chups loves seafood, I ordered steamed fresh scallops (£5.50 each, min order two). The combo of a perfectly cooked sweet scallop with a seasoned soy dip met with her approval. If I was being ultra-critical, I think the scallop would've benefitted from being garnished with some glass noodles. 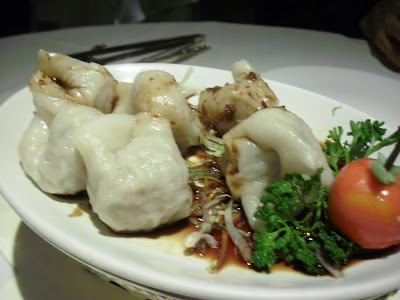 As one of Mr Fussy's no-no's is shellfish, we ordered some chilli pork dumplings (£5.50). My friends enjoyed these more than I did although we all agreed what little chilli dressing there was lacked fire. Whilst these dumplings were obviously own-made, I took issue with the lack of chives in the pork filling and the slightly thick wrapper. Mr Fussy thought I was being harsh and he ended up taunting me with jibes of ‘who's Mr Fussy now?’.

The Mains
Steamed sea bass w/ginger & scallions (market price, £26.80) is a Cantonese classic and one of my favourites. It's difficult to mess this up as long as the fish is fresh and isn't overcooked. Royal China's rendition didn't disappoint with its 'melt in the mouth' texture. Both my friends were impressed with the quality of this simple yet classy dish. On the downside, we were expecting to see a larger fish for our money. 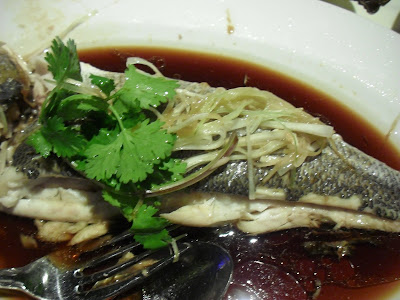 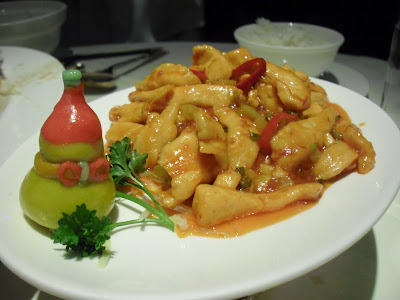 I then made a grave tactical error that nearly derailed the challenge. Just what the hell was I thinking ordering a Sichuan dish in a Cantonese restaurant ? Suffice to say the sautéed chicken w/dry chillies Szechuan style (£8.80) was the low point of the evening. This orange coloured dish wasn't particularly spicy and was reminiscent of a bog-standard take-away. It would certainly be unrecognisable to any native of Sichuan and I was livid with myself for ordering this. 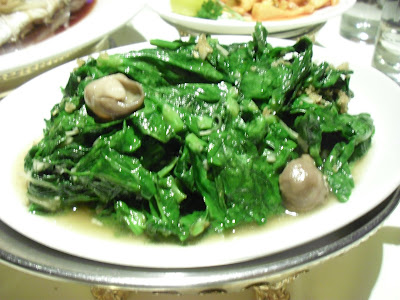 For vegetables, we followed the advice of the waitress and ordered the dao miu or stir-fried mange-tout leaves w/garlic (£8.80). No matter what Matthew Norman, that world-class ignoramus masquerading as a restaurant critic thinks, the Chinese are masters of vegetables. And so it proved here as this tasty plate of greens met with universal approval.

The Desserts
At this point, I reckon I had only half convinced Fush 'N' Chups. I couldn't afford another error and the desserts had to deliver. Like many a Chinese restaurant dessert menu, there was a lot of uninspired options and I had to choose carefully. 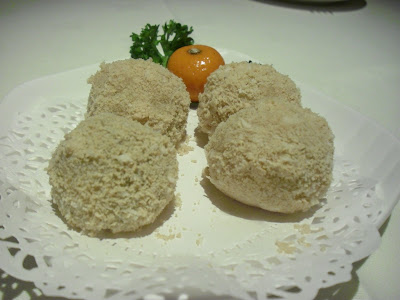 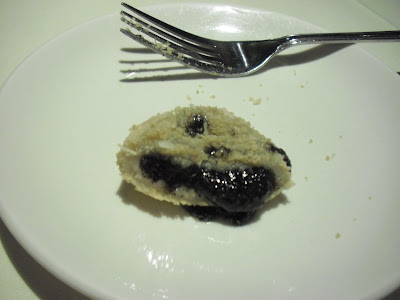 Given how tight the contest was, I was so relieved to see my old friend, sesame dumplings with peanut crumbs (£4.30). I had a feeling that these squishy glutinous rice flour balls filled with an oozy sweet black sesame paste would save the day. And they did. Fush 'N' Chups was so enamoured with these beauties that she would've quite happily devoured another plate. 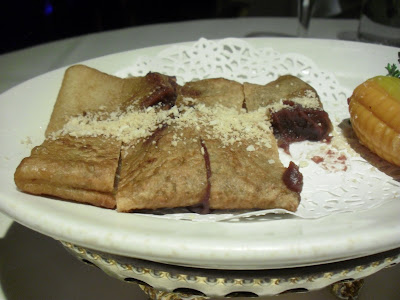 In contrast, the pan-fried red bean pancake (£5.60) didn't quite hit the same heights. The pancake itself was fine but the red bean paste filling wasn't quite sweet enough. That said, it didn't detract from the meal and I think I had done enough to win the challenge.

The Rest
The dining room had a 1980's feel about it and the restaurant could do with a refurb both inside and out. With a Kiwi at the table, it was inevitable that we ordered a New Zealand wine and the Wairau River Sauvignon Blanc (£26.90) from Marlborough was a sound choice.
I thought the service was very good especially with the recommendation of the dao miu and the expert deboning of the fish. Royal China also serve lunchtime dim sum and based on a previous visit, albeit many years ago, it's pretty competent.
The total bill was £115 including rice and a 12.5% service charge. I know some might baulk at spending nearly £40/head on Chinese food but that's not unreasonable if you order fresh seafood and decent wine. Whether it's good value here is another matter and for that amount of money, I expected more of a 'wow' factor, and a larger sea bass.
Finally a word of warning, the only cards accepted here are AMEX and Diners Club so you might want to go to the cashpoint beforehand.
The Verdict
I wouldn't say that I totally changed Fush 'N' Chups' opinion of Chinese cuisine – my faux pas with the chicken put paid to that. However, I was more than halfway there and I hope she'll sample more of the food of my forefathers.
I probably judged Royal China more harshly than either of my friends (they thought I was being a total arse about the dumplings). That said it's a cut above the average suburban Chinese restaurant and better than many Chinatown joints. As I live near Putney, I'd be happy to return but I'm not sure I'd bother if I lived further away.