Mr Noodles on the Streets of Beijing

Beijing is a great place to sample different Chinese cuisines and I’ve been lucky to try food from all across China in the capital city. Over the coming weeks, I’ll be posting about Peking Duck at Ya Wang, posh Sichuan at South Beauty, dumplings at Shun Yi Fu, Shanghainese treats at Xiao Nan Guo and my blogging nightmare at the 'Yunnan Embassy'. In the meantime to whet your appetite, this post rounds up the good, bad and the ugly of Beijing.

Donghuamen Night Market is definitely bad and ugly. It sells scorpions, starfish and indeterminate meat on skewers. If that doesn’t put you off, the neglect of basic food hygiene should. I’ve yet to eat here (not even when pissed) and you shouldn’t either. 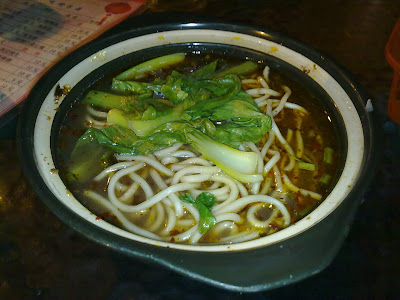 I don’t think street food in Beijing is all that good and there’s certainly nothing here that comes close to the night markets of Taipei. Shanghai’s famous Wujiang Lu is also pretty lacklustre for street food although there is a branch of Yang’s Fry Dumplings.

I’m also not sure whether it’s me being choosy but there seems to be a lack of quality Cantonese restaurants in the capital. My one foray into dim sum confirmed my suspicion that you need to go to 5-star hotels to enjoy quality Cantonese food in Beijing. Of the places I've eaten in, I can recommend Noble Court at the Grand Hyatt Hotel.

Now as Mr Noodles, you probably thought I’d be banging on about the noodles in Beijing but to be honest, I lucked out a bit on the noodle front as I failed again to fall in love with zhajiangmian (literally means ‘fried sauce noodles‘). 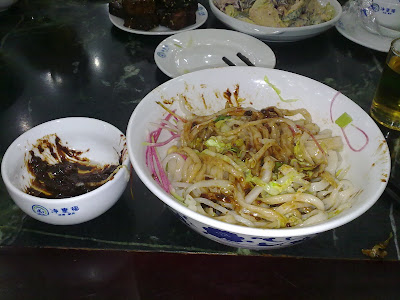 This classic Northern Chinese dish of hand-pulled noodles mixed with a bean paste and various shredded vegetables like cucumber, radish and spring onion ought to be food from the gods. But no matter how hard I’ve tried, I’ve never agreed with this dish. It wasn’t all bad as the restaurant I tried it in had a good vibe, cheap beer and the rest of the food was OK if somewhat unmemorable. You know the drill by now, look for the Chinese sign…..

Unfortunately, I have no idea where this restaurant is located except that it was near Houhai, a great place for drinking - loads of bars with outdoor seating by the lake. Drinks are much cheaper than Shanghai (about RMB 35 for a beer). If you fancy, you can live out your Freddy Flintoff fantasies by hiring a pedalo or you could go on a proper boat if you’re going to be boring.

On this visit, I didn't make it to some of my favourites such as the trendy Taiwanese place, Bellagio and South Silk Road which specialises in Yunnan cuisine. I also missed out going to Ghost St, a mile long drag full of inexpensive restaurants - it's lit up like a Christmas tree and strangely reminds me of Manchester’s Curry Mile. Hot pot (huo guo) was also off the menu too as we rolled up to a building site where the restaurant used to be. I'm also gutted that I didn't get to try Shanxi noodles at Noodle Loft.

I’d love to hear from you if you have any Beijing tips you want to share. In particular, recommendations for any Chinese cuisines that I haven't covered.
Posted by Mr Noodles at Sunday, August 30, 2009