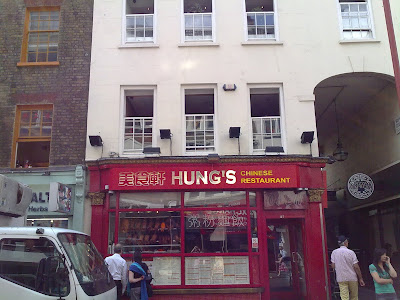 Being a newbie blogger, I’ve decided to play it safe and start with an old favourite, wonton noodles served at an old favourite, Hung’s on Wardour St (near the Chinatown arch). This is also the first instalment in my series of reviews on the London soup noodle scene.

This place is my regular Chinatown haunt and it has barely changed in all the years I’ve eaten here despite a refurb and name change (it used to be called Crispy Duck). It might look tiny but it’s on three floors so don’t be put off if it seems full. Service is efficient rather than friendly although I swear I got a smile out of one of the waiters sometime in 2005.

Whilst it won’t change your life, Hung’s wonton noodles (£4.50) tick all the boxes. The wontons have the right mix of prawn and fatty pork, they use the proper fresh egg noodle (san mein in Cantonese) and the broth isn’t MSG laden. It’s not a big bowl but compared to the miniscule portions that you sometimes get in Hong Kong, it's a supersize portion. Anyway, you get your money’s worth with six wontons. 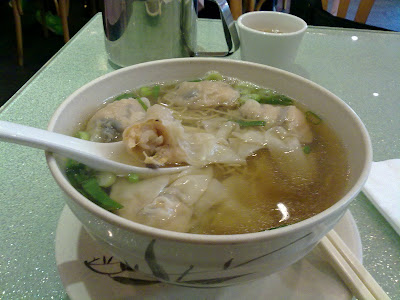 Verdict: Stump up the extra 30p and go for the king prawn dumpling soup noodle. Good for a light lunch or big snack when shopping in and around Chinatown.