Shanghai: The Best of the Rest 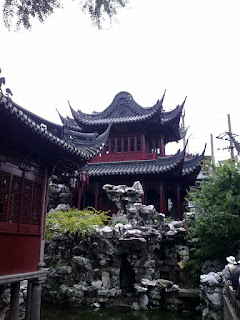 Now you may be mistaken in thinking that all I did in Shanghai was stuff my face with xiao long bao and sheng jian bao. You wouldn’t be far wrong but here’s a round-up of the rest of the places in Shanghai that I’d return to. They're all in the French Concession near where I stayed.

Cantonese food is very popular in Shanghai and there are loads of casual places as well as posher restaurants if you need a fix. Bifengtang is a chain restaurant not dissimilar to the cha chaan teng or caffs that you see in Hong Kong. There’s a bilingual menu with a wide selection of Cantonese one-plate dishes, congee, soup noodles, fried noodles and dim sum with some Shanghainese faves. It’s pretty unremarkable except for their dim sum dish of prawn spring roll wrapped in cheung fun (RMB 16). The contrast between the different textures of springy prawn filling, crispy spring roll pastry and soft rice noodle roll exterior were a joy. I went to the Changle Lu branch which is open 24 hours a day.

Even better Cantonese fare is available in the café inside the Cathay Theatre on the corner of Maoming Nan Lu and Huaihai Zhong Lu. It doesn’t have an English name but you can see the Chinese name from the name card on the left hand of the below photo - just follow the signs and go upstairs. They have an extensive bilingual menu and there’s also a Cantonese BBQ counter (extra marks for authenticity). The stand out dish here was Three Treasures Congee (RMB 28) served in a claypot. The three treasures in question were fish slices, crab legs and prawns with the added bonus of a fourth treasure of clams ! This was the best congee I’ve had in a long time and was better than the stuff I had in Hong Kong and Guangzhou earlier this year. 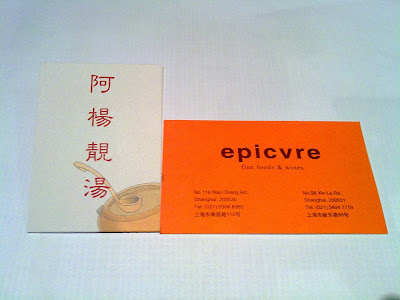 A very un-Chinese place was the Epicvre which I discovered whilst strolling along Xinle Lu. It’s a fine food and wine shop with a French bent. There’s a few tables for punters to snack and drink. I didn’t eat here but they do serve quiche type things and salads. The reason to come here is to enjoy their fine wines and my nicely chilled glass of Sauvignon Blanc (RMB 60) really hit the spot after walking around in humid 30C heat. 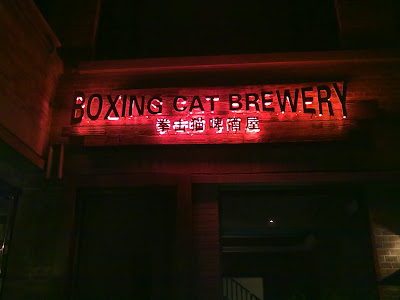 Now Shanghai is an expensive city to drink with beers costing up to the equivalent of £6 - £7 which is double the going rate in Beijing (or London for that matter). So I was pleased to track down the Boxing Cat Brewery on the Fuxing Xi Lu, a relatively quiet corner of the French Concession. This microbrewery sells pints at around RMB 45 (RMB 35 during Happy Hour) and it‘s a great place to drink outdoors. I didn’t eat here but they do American food including weekend brunch.
Posted by Mr Noodles at Monday, August 24, 2009