If xiao long bao is the elegant pretty Shanghai dumpling then sheng jian bao is it's more 'obvious' cousin with it's alluring crispy pan fried base and fragrant sesame & chive topping. After reading this post in Appetite for China, sheng jian bao (SJB) rose to the top of my must-eat in Shanghai list.

SJB are similar to XLB in that they have a minced pork and soup filling and are served with a vinegar dip. Topped with sesame seeds and chives, they're cooked in giant batches in a pan covered with a wooden lid. This steams the SJB whilst simultaneously frying the base to a crisp. You'll see the finished article at the front of 'hole in the wall' joints throughout Shanghai. 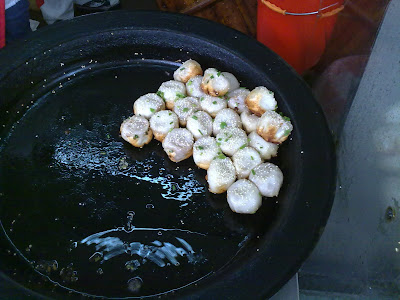 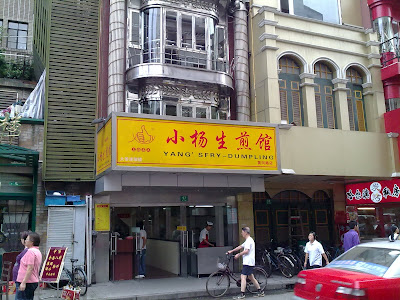 Huanghe Lu is truly blessed as Yang’s Fry Dumplings is across the road from Jia Jia Tang Bao. Whilst there was other stuff like noodles and won ton soup available, everyone ordered sheng jian bao (RMB 4.5/4pcs). I was very lucky as I had the first serve from a fresh batch but this brought its own perils as I had to wait for them to cool down. If you think XLB can scald then SJB can really scald ! Once cooled, I ate the SJB like I would XLB taking care not to squirt soup everywhere.

Yang's SJB were the best I tried as other examples were too greasy with oil rather than soup in the filling. The only other place worth mentioning is a place in the former French Concession on Shanxi Nan Lu between Jinxia Lu and Julu Lu. No English name but I did take a photo of the shop front. 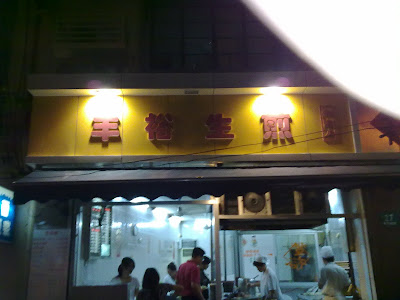 Unlike Yang’s there was no bilingual menu and whilst I can speak Cantonese (passable) and Mandarin (badly), I can't read Chinese characters. Thankfully, the girl on the till was an absolute star as she patiently read out the short menu to me in Mandarin and pointed out different dishes in the open kitchen. If only her boss was as half as nice...

The sheng jian bao (RMB 4/4pcs) were good rather than great but frankly I couldn’t give a toss after I found out they served large bottle of beers for RMB 4 (that's less than 40p if you‘re wondering). Seeing that a pint in Shanghai can cost over the equivalent of £7 in a trendy hellhole expat bar, the beer was a must. Now as it doesn’t take long to polish off some bao, I ended up nursing said beer. This led to a scolding from the fearsome boss lady (in Shanghainese I think). To avoid further grief I ordered their wonton soup (RMB 4). 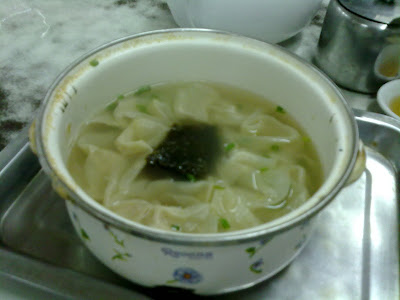 I would have probably ordered this anyway as seeing the wontons being made in the open kitchen made me more hungry. Unlike Cantonese wonton, the pastry is thicker and the filling smaller. But that’s irrelevant as the soup was the winner here with the block of seaweed imparting a wonderfully deep umami hit. They also serve cold noodles here with a variety of toppings but despite being Mr Noodles, I can’t say I enjoyed these when I returned for breakfast the next day.

Verdict: Sheng jian bao is a must-eat in Shanghai and Yang’s Fry Dumplings is the place to go. If you happen to be in the French Concession then pop into the little ‘hole in the wall’ for bao, beer and wonton soup (just don't upset the boss !).