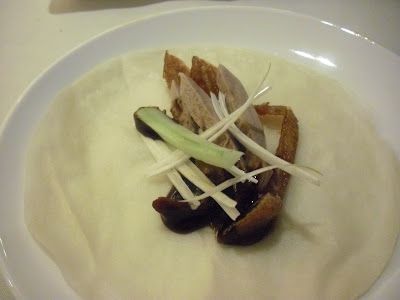 It wasn't until my fourth night in Beijing that I ate what could be considered local food. In other cities (like Hong Kong or Singapore) I would have stomped my foot like a spoilt six-year-old if I had to wait that long. But I don't mind waiting in Beijing because it's, with the possible exception of Shanghai, the only city in the world where one can sample food from every corner of China. For instance I ate Cantonese, Shanxi, Buddhist vegetarian, Xinjiang, Taiwanese, Sichuan, Shanghai and (more) Shanxi food before pitching up at Duwang 都王 for some local fare. 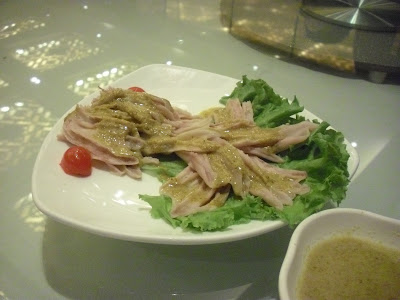 Duwang specialises in the Chinese capital's most famous dish: Peking duck (Beijing kaoya 北京烤鸭). While the crispy skinned duck is the restaurant's headline act, the support acts are pretty damn good, too. Opening up this veritable festival of all things duck was a cold starter of mustard duck webs. These had been deboned leaving just the skin, web and cartilage. I really enjoyed the crunchy cartilage, with the mustard giving it a nasal passage-clearing quality. 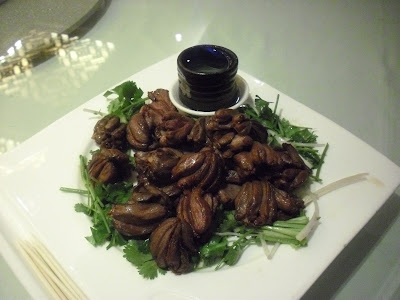 Next up was a rather theatrical dish of duck hearts served with a flaming teacup of baijiu 白酒. Here the hearts were skewered then placed in booze-fuelled flames. This may seem gimmicky, but the effect of crisping up the duck hearts enhances both the taste and texture. At around the same time out came a dish of duck liver, which was a bit like a pâté. This was OK, but to be honest, I can barely remember anything about it – never a good sign. 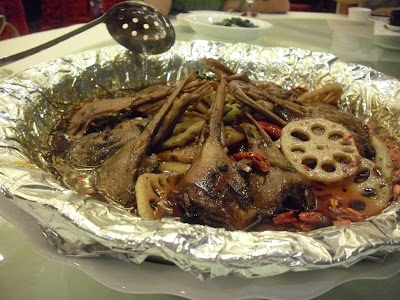 Over the years I've pretty much eaten most parts of a duck, but the meat from the jaws was a new experience for me. Served in a vat of red oil infused by chillies and Sichuan peppercorns, these Sichuan-style duck jaws were revelatory. The meat on the jawbone was remarkably tender and had soaked up the numbing heat of the Sichuan peppercorns. What's more, the tongues were still intact – a bonus! Also bobbling alongside the jaws were lotus root, potato slices and mooli. These had also absorbed lots of flavour from the red oil. I was so engrossed in this dish that I missed out on taking photos of the chef carving up the Peking duck. 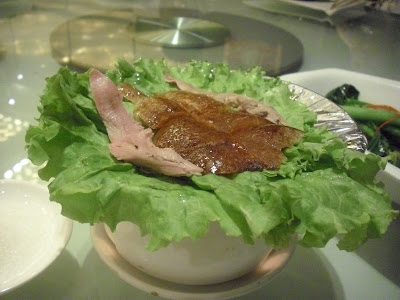 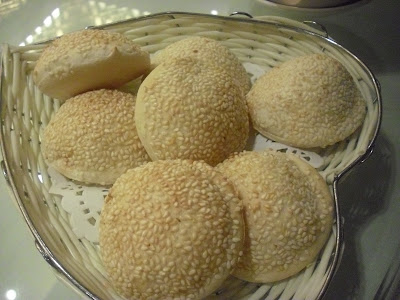 By the time I'd finished my assault on the duck jaws, the Peking duck had already been carved up into slices of crispy skin and tender meat. As is the modern way, the crispiest bits of skin are set aside and dipped into sugar. The rest of the skin and meat are then used to fill pancakes or even better, sesame buns (zhima shaobing 芝麻烧饼), with the usual spring onion, cucumber and sweet bean sauce. The duck was very good at Duwang, and the meat was kept moist and tender by being served on plates over a tealight. 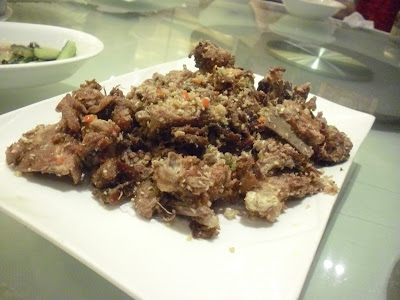 You can opt to reserve some of the duck meat for a stir-fry, but we eschewed that option, as the restaurant usually diddles you by not using all of the meat. Instead the carcass is usually bagged up and taken home to make stock. However, in this instance it was used to make an extra course of deep-fried duck bones tossed in garlic chilli salt. This was a fine accompaniment to my beer and I enjoyed hoovering up the last remnants of meat off the bone! There was also one last course of duck soup, but this was a bit bland.

There were also some non-duck dishes such as cucumber salad, stir-fried greens and other bits and bobs, but I can't remember much about them. Besides, who cares? Restaurants like Duwang stand or fall by the quality of their duck dishes.

There's a lot to like about Duwang: the good service, the traditional 'red and gold' décor, but above all, the pride in the food it knocks out. The thing is, though, Beijing (being a city of 20 million inhabitants) isn't easy to get around, and a restaurant has to be really exceptional to schlep across town for. Duwang just falls short of falling into that category, and I consider it to be an excellent neighbourhood joint rather than a must-visit. Mind you, it is close to the Olympic complex, which remains a popular tourist attraction.

The easiest way to get to Duwang is to hail a taxi, and show the address to the driver. As the restaurant doesn't have English signage, look out for the characters 都王 on the shopfront.

Other Peking Duck Joints in Beijing
For a similar old school duck-focussed feast to Duwang, I recommend Ya Wang (鸭王), which has branches dotted across the capital. I've probably been to this restaurant more than any other in Beijing, although my last visit was way back in 2009. More recently, fellow blogger Hungry Female enjoyed Liqun, a charming, if slightly run-down, joint in a Beijing hutong.

For an upmarket Peking duck experience, the consensus choice seems to be Da Dong (大董). Here the focus is as much on modern Chinese cuisine as the duck. I was blown away when I ate there in 2010. Other posh places that people rate include Duck de Chine and Made in China.

One last word of advice, lots of guidebooks and websites still mention Quanjude 全聚德 as a place to try Peking duck. However, many are of the opinion that this famous restaurant group is trading on past glories, and my colleagues in Beijing consider it to be a tourist trap.
Posted by Mr Noodles at Sunday, June 10, 2012