Dim sum has been around in the UK for many years, but it was largely the preserve of the Chinese community for a long time. However, in the last decade or so, it has crashed into the mainstream. One of the side effects of its popularisation has seen this hitherto daytime treat served in the evenings with cocktails. Unsurprisingly, this jars with traditionalists such as myself, but I've just about got over this shocking breach of etiquette! 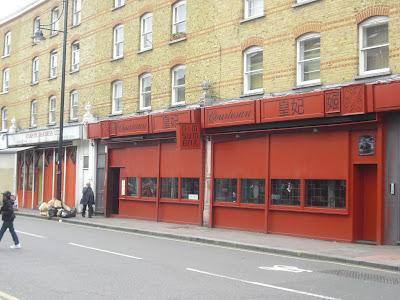 While there is no reason why an all-day dim sum cocktail bar shouldn't work, it doesn't help that the food served by this concept's chief exponent, Ping Pong, is so poor. With that in mind, one might suspect that I wouldn't be tempted by Courtesan Dim Sum Bar, but this Brixton newcomer has enough old school touches (namely a bilingual Chinese-English menu including cheung fun) for me to give it a try. 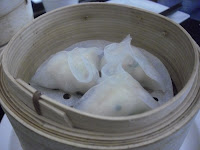 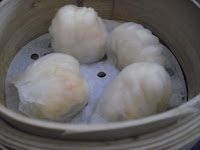 Kicking off with the steamed selection, the king prawn dumplings (har gau 虾饺) were above par with well-seasoned prawns and a delicate wrapper. Less successful were the chicken & coriander dumplings (香菜鸡饺), as I'm not a big fan of minced chicken - it just isn't fatty or juicy enough. The steamed roast pork buns (cha siu bao 叉烧包) and chicken buns (gai bao 鸡包 ) were nice and fluffy although stingily filled. 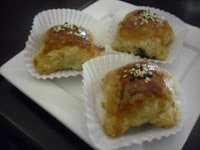 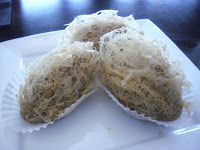 Onto the non-steamed offerings, and I was really impressed by the taro croquette (wu gok 芋角) as it was crispy, not oily with a tasty filling. I also liked the roast pork puff (cha siu sou 叉烧酥), but was less enamoured by the roast duck puff (siu aap sou 烧鸭酥). The latter was just too aggressively peppery for my liking, and I could barely discern that the meat was indeed duck. 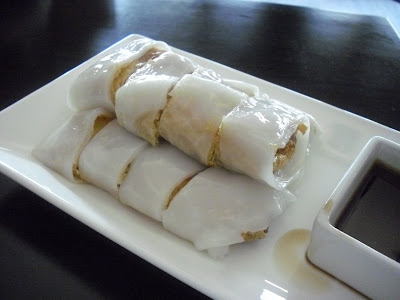 So far, so good, but where Courtesan really shines is with its cheung fun. In particular, the
prawn with beancurd cheung fun (鲜腐皮肠粉) where mashed prawn is wrapped in tofu skin, deep fried then carefully wrapped with rice noodle sheet. This triple-textural delight of springy mashed prawn, crispy tofu skin and slippery smooth cheung fun was a revelation. The roast pork cheung fun (叉烧肠粉) was also very good, too. I'd even go so far to say that Courtesan's cheung fun is right up there with London's finest. 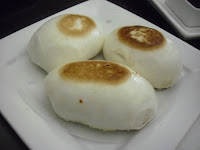 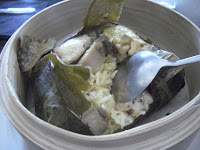 Whilst the cheung fun was exemplary, there were some duff dishes, which regrettably included some of the house specials. I just didn't get the idea behind the jerk chicken parcel in rice. The rice wasn't moist enough, and surely jerk chicken isn't at its best when steamed in a lotus leaf. And the seasoning didn't help either, as it was very one-dimensional in its spiciness.

In common with the steamed buns, the sesame grilled vegetable & meat buns (煎菜肉包), while technically spot-on, were inadequately filled. Rightly or wrongly, when the label Sichuan/Szechuan is attached to a dish, one expects fireworks. So it was a bit sad that the Szechuan-style ribs (川式排骨) were so insipid. To me, they were bog-standard fried spare ribs, but without the familiar Cantonese chilli-salt (chiu yim 椒盐) seasoning. 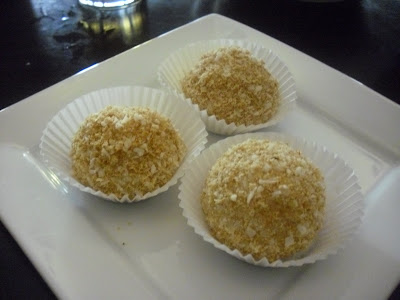 There wasn't much room for dessert, but we managed to squeeze in some black sesame balls (雷沙汤丸), which were of a decent standard. As well as cocktails, Courtesan has a very good tea selection, and a dim sum meal with tea would set you back around £20/head.

On balance, I like Courtesan. The classics such as har gau, wu gok and cheung fun (especially the latter) were of a high quality. There were some misfires, but there is undoubted skill in the kitchen. Service was good, but then again we were only the diners the other Saturday (I can only put this down to the fact that the restaurant was newly opened in late-April, and had only been in business for three weeks when we visited). And given the largely empty dining room, I couldn't really judge the ambience. For that I guess you need to visit on a busy night.

So where does Courtesan sit in the London dim sum scene? For me, it's a good local rather than a destination for dim sum. In my opinion, there a couple of factors holding this restaurant back from greatness.

Firstly, the menu is too brief, and while this isn't necessarily a bad thing; there are some notable dim sum absentees such as fried cuttlefish cakes (mak yu beng 墨魚餅). And the total lack of non-dim sum dishes such as Cantonese BBQ and noodles restrict opportunities to bulk out the meal.

Secondly, it isn't particularly cheap with prices from £3.20 upwards, which is on a par with swankier restaurants such as Princess Garden and Phoenix Palace, both highly regarded dim sum destinations. Then there's the wider competition within Brixton itself, where there are loads of affordable, decent quality dining options.

I fear I may be being too hard on Courtesan; I don't mean to, it's just that I'm very particular when it comes to dim sum. And for all my (minor) gripes, I'm glad that this restaurant is spreading the gospel of dim sum to Brixton. So if you do find yourself in the neighbourhood, do check this place out.