A Quick Stop in Kuala Lumpur 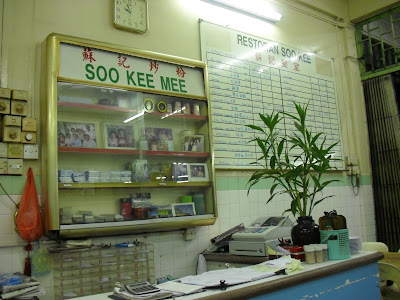 This really was a flying visit. I was in Kuala Lumpur for less than 48 hours before leaving for Singapore. This meant there was only room for three meals so let's start with the best. Soo Kee is a charming, old school restaurant with an outdoor kitchen knocking up Malaysian Chinese food. It's only a short distance from the downtown Bukit Bintang area, where I was staying but at the same time, it seemed like I was far away from the bright lights and the big city. They have two signature dishes. Both noodle dishes. My kind of place!

My favourite was the shan har mein (fresh prawn noodles) - these were made with what in local parlance are known as 'medium prawns' ! Medium ? They were massive and I would've loved to see what the king prawns looked like. This was my fave of the night with the crispy egg noodles soaking up the rich 'gravy' that accompanied it. And what gravy! It had been enriched with egg white and prawn roe. This was cholesterol-fuelled death on a plate and just looking at this dish took five years off my life.

The other noodle dish was a 'wet fried' beef ho fun. It may not be much to look at but it was damn tasty and the beef was full of gingery and peppery goodness. They really know how to do their 'gravies' here with the egg white enriched gravy going really well with the silky smooth ho fun rice noodles.

We also ordered some mixed satay skewers (tasty but my photo turned out badly) and on the boss lady's recommendation, garlic chives stir fried w/crispy belly pork. She reasoned that I wouldn't get much opportunity to eat garlic chives back in London so we didn't need much persuading. It was full of crunch and flavour. Yet another winner.


Still feeling a bit peckish, we ordered another one of the boss lady's tips, chiu yim frogs' legs. Well I guess it makes a change from chiu yim (chilli salt) spare ribs and squid that you usually see. The frogs' legs were very moreish and as the cliché goes, did taste a bit like chicken. This dish went really well with the cold beers.
If you do come here, don't be too shocked to be greeted by a Welsh bloke called Robert; he's married to the boss lady, Jessica. I also wouldn't bother with a menu, just tell Jessica your likes and dislikes and let her choose for you. I can't recommend this place highly enough and big thanks to my colleagues for taking me here. I liked this place so much; I've even included the contact details, which I'm usually too lazy to do.

Given the brevity of my visit, you may be surprised that my first meal on Malaysian soil was Japanese. The thing was that I knew I was going to be in the region for a week so there was going to be plenty of scope to eat local food chosen by local people. Besides, raw fish is an ideal first meal after a long-haul flight and I liked the look of the restaurant, Kampachi at the Pavilion shopping centre. I really liked the sushi but the sashimi was even better. 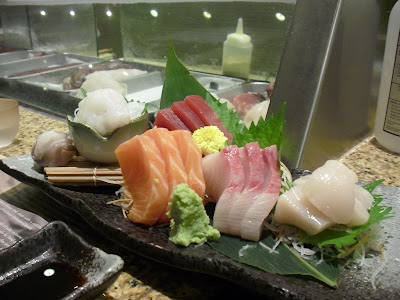 As we were sat at the bar, I took the opportunity to chat with the Japanese-trained Malaysian Chinese sushi master. He explained that the fish at Kampachi was very fresh, as its flown in direct from Japan twice-weekly. He also passed on some tips on how to tell if the fish was fresh or not.

Also at the Pavilion is Madam Kwan's, a mini-chain serving Malaysian classics. I followed many of my colleagues in ordering nasi bojari, as I've never had it before. This I believe is a dish with Indonesian origins consisting of tricolour rice served with a fried chicken leg, beef rendang and assam prawns. I liked this dish but it could've done with more of the tamarind-y assam prawns and decent rendang with rather less of the fried chicken. 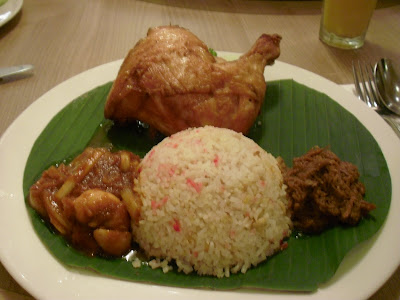 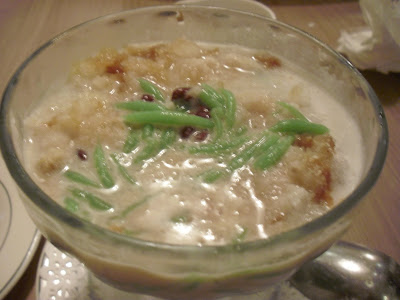 For dessert, I went with cendol, which consists of red beans and green 'worms' in coconut milk topped with shaved ice and palm sugar. I enjoyed it but I hit the wall about halfway through. By the way, Madam Kwan herself was in attendance when we went for lunch.

It's a shame my visit to Kuala Lumpur was so brief, as it is very much my kind of town. In addition to the local cuisine drawn from the Malay, Chinese, and Indian communities, there are plenty of international options. These include an increasing number of Middle Eastern eateries that primarily cater for the growing numbers of tourists from that region.

For more on Malaysian food, I highly recommend that you go to 3 Hungry Tummies and Test with Skewer for their 'Muhibbah Malaysian Monday' feature. Each month, they take it in turns to round-up the best of Malaysian on their respective blogs.