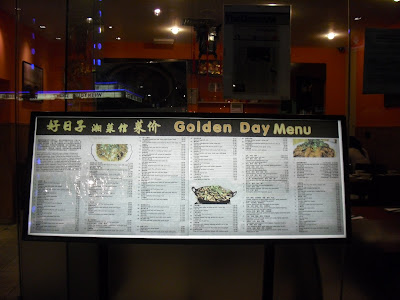 Hunan is part of the Chinese spice belt* and its food is typified by being gan-la (dry-hot) in contrast to the ma-la (numbing-hot) of neighbouring Sichuan. Hunan cuisine is popular throughout China and there are many restaurants in major cities like Beijing, Shanghai, and Guangzhou. Following the Chinese Civil War, it also became popular in Taiwan from where it subsequently established a presence in America in the 1970's.
So whilst Hunan cuisine (or a localised version of it) is very common in America, it's very rare in the UK. However, things seem to be changing and restaurants are now starting to appear. For example, there's Local Friends in Golders Green and Golden Day, which is on Shaftesbury Avenue on the site of what was Chinese Experience. It was at the latter that I joined Kake and Bob from the Randomness Guide.
I've previously eaten Hunan food in China but I can't remember too much about it except that I enjoyed it and it was spicy. Needless to say, this was in my civilian days before I took photos and documented what I ate. So it was a real pleasure that Kake's friend W – who hails from Hunan – came along to show us the ropes. I'm not so sure she was as pleased though, as she had to field 101 questions about her native cuisine.
First impressions were good and I liked the fully bilingual menu with pictures, which was pretty much 100% Hunan with the exception of a small selection of 'Greatest Hits' for the less adventurous. The clientele was predominantly Mainland Chinese sprinkled with a few tourists. The interior was clean and modern but in my opinion over lit. 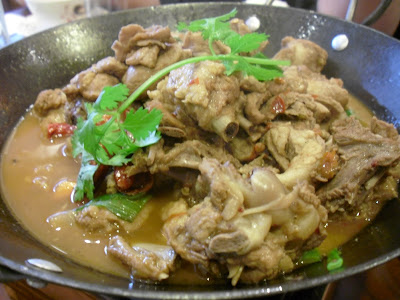 Onto the food and we gave the cold starters a miss and dived straight into a selection of main dishes. I enjoyed the Xiangxi-style dry pot duck w/baby ginger (£15.80), which was presented in a mini-wok sat atop a burner. This dish featured bits of duck (on the bone) and vegetables in a gravy that was lent heat and depth from the chillies and the ginger respectively.


Fielding my questions, W advised that this dish was from the west of Hunan and that the presentation with the burner was gimmicky and not strictly traditional. Mind you that was a moot point, as the burner prematurely extinguished, which meant the gravy didn't reduce, as it should. For all that, I enjoyed this dish unlike The Independent's John Walsh, who doesn't seem to realise that the Chinese prefer their poultry on the bone. 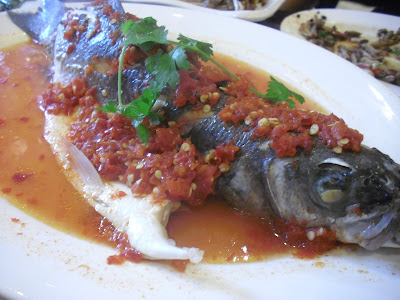 How a Chinese restaurant prepares fish is always a good indication of its ability in the kitchen. Golden Day passes with flying colours with its steamed sea bass w/home-chilli paste (£15.80). This was perfectly steamed and the delicate flesh flaked off, as it should. The chilli sauce was really powerful and was the only really spicy hot flavour of the night. It should've been a winner but it wasn't, as in my opinion, steamed sea bass and chilli sauce are uneasy bedfellows.

With such a delicate fish, this robust chilli sauce was too overwhelming. I do enjoy spicy fish dishes, like those in Sichuan restaurants but the fish used in such dishes is meatier and has been coated to protect the flesh. That said, perhaps years of eating steamed fish the Cantonese way with ginger, spring onion, and soy has conditioned my tastes, as everyone else liked this dish. 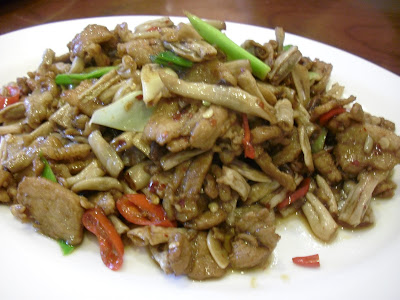 Of the other selections, authentic sun dried green beans w/pork slice (£8.50) was a home-style dish that had a nice kick to it although we could've handled more heat. The mashed aubergine w/Hunan local taste (£6.80) was presented beautifully with the pestle that was used to mash the aubergine at the table. This silky smooth dish is a must-order for all the lovers of the 'gine genie. Taste wise, I thought I could detect sesame although others thought it smoky.
For sides, we also ordered competently done morning glory w/garlic (£8.50) and some Chef's special fried ho fun with beef (£5.50), which was OK but not as good as you can get in a Cantonese joint. The bill with rice, drinks and service came to £100, which at £25/head was reasonable value. Service was a little inattentive as the tea took a while in coming. Mind you, they did let us linger after the meal, which isn't always the way in some Chinese establishments.
Verdict: Opinions were mixed with little or no consensus over favourite dishes. The Randomness peeps didn't think it hit the heights of a previous visit, although they sampled 14 different dishes that day. W thought it average and toned down, which is to be expected coming from a Hunan native. I enjoyed the food but it didn't change my world. That said there's more than enough interesting dishes to lure me back.
Other Stuff: Golden Day got a glowing write-up from Jay Rayner in the Observer and his review is plastered pretty much everywhere in the restaurant from the window display to the bar. It was so omnipresent that I was surprised not to see it above the urinal.
* – The Chinese spice belt is considered to consist of the following inland southern provinces: Guizhou, Hunan, Jiangxi, Sichuan (including the Chongqing municipality), and Yunnan. Each cuisine uses chillies liberally and in different ways. There is much debate as to who is the ‘Daddy’, when it comes to spiciness.
Posted by Mr Noodles at Sunday, August 01, 2010