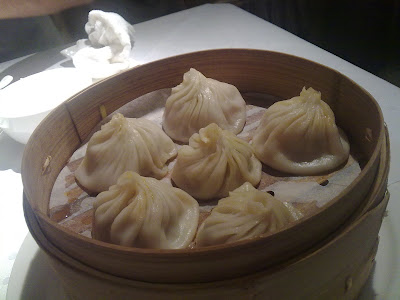 Shanghai is the home of the xiao long bao, the famous dumplings with a soup filling. Eating these in Shanghai excited me more than any sightseeing trip ! For the uninitiated, World Foodie Guide explains what these dumplings are all about.
I decided to do a ‘David & Goliath’ tasting of xiao long bao or XLB by going to the homely Jia Jia Tang Bao and the world famous Din Tai Fung. I also tried XLB at a couple of other places but they weren’t worth writing about (although the photo at the beginning of the post is of one of those inferior XLB’s).
I came across Jia Jia Tang Bao in the Appetite for China blog. This is a ‘hole in the wall’ joint on Huanghe Lu, just north of People’s Square. As XLB are also known as tang bao, the name of the shop translates as ‘Jia Family Soup Dumplings’ - there’s no English signage so look out for the sign below: 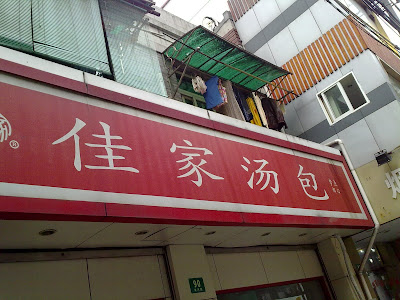 I decided to go off peak at 3pm in the afternoon but it turned out there was no off peak. All the tables were full and there was a crowd waiting outside for take away including a group of foodie pilgrims from Hong Kong. I had wanted to try the cheapest option of Pork XLB (RMB 7.5/12 pcs) but these had sold out so I went for Pork & Crab XLB (RMB 19.5/12 pcs). I couldn’t be bothered to fight for a table so I ordered take away in a polystyrene tray after dousing the XLB with vinegar. 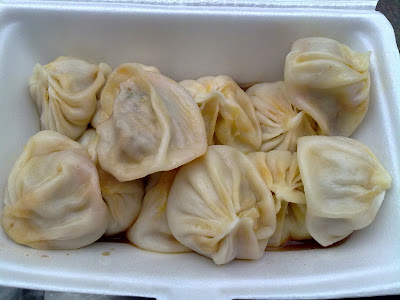 As I expected the XLB were very tasty, in particular I liked the hint of dried citrus peel (guo pei in Cantonese) in the filling. The skins were robust enough not to tear easily but at the same time weren’t too thick. My only complaint was that there wasn’t enough crab but I couldn’t really moan as 12 dumplings cost less than £2 !


If I hadn't tasted any other XLB, I would have been a happy man but two days before my trek to JJTB, I visited Din Tai Fung, Unfortunately, my photos were lost but their website has loads of pics and you can also learn about the rags to riches story behind this institution.
Although originally a Taipei based restaurant, there are now no less than 5 branches in Shanghai. I went to the Xintiandi branch which is very centrally located and ideal for a dumpling fix before being royally ripped off for an overpriced beer in a bar.
The XLB come in either portions of 5 or 10 per steamer and unless you’re in a big group, I recommend ordering the smaller portion and whatever the size of your group, stagger your order to keep the dumplings steaming fresh.
I sampled the Pork XLB (RMB 29/5 pcs) and the Pork & Crab XLB (RMB 43/5 pcs). The XLB were more polished compared to JJTB and they were pretty much perfect. So much so that they do actually look like the photo in the menu ! Pork & Crab XLB can sometimes be a joke in that there is barely a hint of crab or crab roe but not at Din Tai Fung where the generous use of crab roe almost made the dumplings too rich.
If that wasn’t enough, they serve the best soup noodles too. The divine double boiled chicken soup with noodles (RMB 50) is a must order and if you don‘t fancy noodles, you can just order the soup. Even their Iron Goddess Tea (tieguanyin) was different class.
Verdict: Go to Jia Jia Tang Bao for a snack whilst sightseeing and then push the boat out for a posh dinner at Din Tai Fung. But be warned, you will bore people senseless about how the XLB in Shanghai are so much better than the ones in London. If only Din Tai Fung would open a London branch or if we could persuade the Jia family to relocate.
[Update Feb 2012: Please visit Din Tai Fung London Fan Club and sign the petition to bring this restaurant to London.]