Tom yum is one of my favourite soups so it seemed a no-brainer to track down some soup noodles using it as a base. I decided to go to Busaba Eathai as I have fond memories of the branch near Selfridges where I used to decamp with my classmates after Mandarin lessons and a couple of pints. 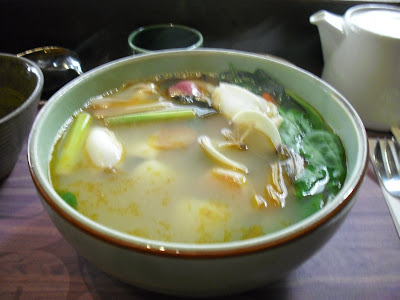 I don't recollect ever ordering soup noodles when I used to frequent Busaba regularly and I remembered why when I saw the menu. You can call me tightfisted but the tom yum talay (£10.50) is one expensive bowl of soup noodles. Now I was expecting to pay a bit more as tom yum is a soup in its own right (if you know what I mean) and Busaba is a bit smarter than the rest of the places on my soup noodles tour. However could Busaba justify a £10.50 price tag for adding some rice vermicelli to a slightly larger bowl of soup that usually costs around the £5 - £6 mark ? First signs weren’t promising as the portion was smaller than soup noodles at Rasa Sayang and Song Que where a big bowl of noodles cost less than £7.

Things picked up when I tasted the tom yum soup which was clean tasting unlike so much of the 'artificial' tasting stuff out there. However, the big disappointment was the talay or seafood which consisted of prawns, clams and squid. I'm not sure why squid is used in soup noodles as it toughens up in the hot soup. Thankfully, it hadn’t toughened up too much by the time I got round to eating it. 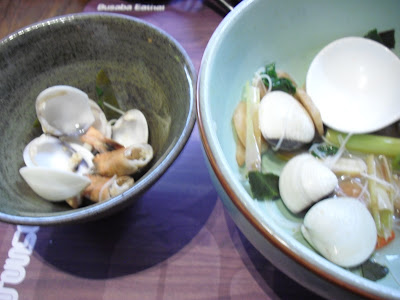 Now as the photo above shows, they needn't have bothered giving me such a big bowl for me to put shells in as there were only two prawns and six clams and half the clams didn’t open. After finishing my meal, I complained about the unopened clams and in fairness I received a 25% discount for my trouble. Actually with the discount, I thought the price was fair for my meal even allowing for a few rogue clams.

Verdict: Soup noodles are casual dining and even allowing for superior tom yum soup, £10.50 is steep.

Other Stuff: Busaba doesn't serve starters or desserts, only mains and side dishes. Their curries and stir-fries are good and the Thai calamari is a great side dish.

{Update Jan' 11 - on a more recent visit, I tried Busaba's pad Thai at their new-ish Panton St branch. Incidentally, I also noticed that the price of tom yum noodles is now more reasonable at around the £7 mark. Although I'm not sure if the size of the bowl has shrunk.}
Posted by Mr Noodles at Wednesday, September 23, 2009