I've become a big fan of Rasa Sayang on Macclesfield Rd (opposite Dehems pub) so much so that I've been unfaithful to my usual Chinatown haunt, Hung's. I’ve been working my way through their menu but as I'm currently on the soup noodles trail, I decided to try their fragrant prawn noodles (£6.90). This dish originates from Penang where it's called Hokkien mee. However in other parts of Malaysia and Singapore, it’s known as hae mee, har mein or xia mian depending on what Chinese dialect you speak. 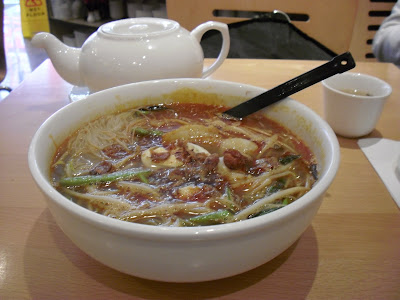 Rasa Sayang's version includes chicken, fish cake, fish ball, squid, boiled egg, beansprouts, tung choi (water spinach) and fried shallots in a bright red prawn based broth. I was offered the choice of noodles or rice vermicelli (mei fen) of which I chose the latter, although I'm pretty sure you're meant to get a combo of both. Oh I nearly forgot the prawns as there were only two not particularly large specimens !

I've eaten prawn noodles in Singapore before and I was sure you got more than two prawns. With that in mind, I did some research and I wasn’t best pleased when I saw this photo on Wikipedia. 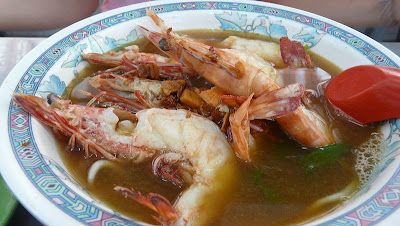 So you could say Rasa Sayang were short changing me on the prawn front ! But once I got over the prawn issue, there wasn't much wrong with this dish except that the squid was tough and chewy. Having said that I don't think I’ll be ordering this dish on my next visit. Nothing wrong with it but for soup noodles, their fish head rice vermicelli soup is far superior.

Verdict: Don't be put off by my slightly negative review of Rasa Sayang, it's a great place for a quick lunch. The service is also far better than the Chinatown norm whether the waitresses are conversing in Cantonese or English.

{Update Jan 2010 - returned here for dinner, which turned to be better than these prawn noodles}
Posted by Mr Noodles at Tuesday, September 08, 2009