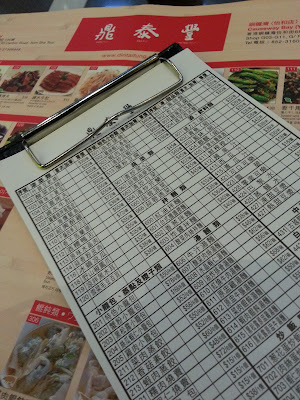 What with my track record, I know you're not going to believe me when I say I didn't mean to visit Din Tai Fung (鼎泰豐) three times in eight days in two different cities. But I did. First up was a solo visit to the Takashimaya Times Square branch in Tokyo. This was followed with a couple of visits to the Causeway Bay branch in Hong Kong, where I had one meal with a colleague and another one with family.

Naturally, as with any trip to Din Tai Fung, I decided to check out the signature soup-filled xiao long bao (小籠包). I've probably banged on about these far too much over the years and the classic pork xlb in Tokyo didn't disappoint. I also ordered a steamer of three kinds of seafood xiao long bao (海鮮三種小籠包). Of these, my favourite was the pork & scallop with the pork & crab a close second, but I wasn't overly keen on the pork & sea urchin, as the sea urchin was a bit overpowering.

Over in Hong Kong, I thought the classic pork xlb and pork & crab xlb were better than in Tokyo but of these were eclipsed by the sublime pork & black truffle xlb (黑松露小籠包), where the rich truffle filling was out of this world. I also enjoyed the unusual angled luffa & shrimp xlb (絲瓜蝦仁小籠包) – this is a little different with its clean tasting, refreshing filling of silk gourd (aka angled luffa). 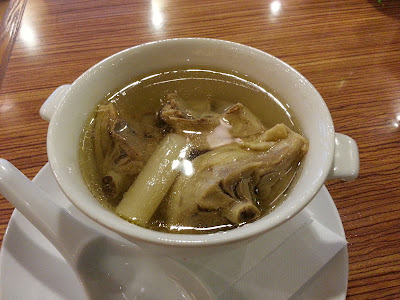 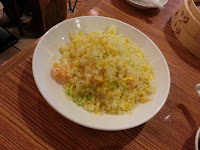 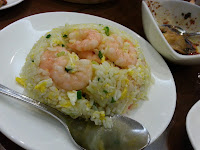 Of the other dishes in Tokyo, I was a bit disappointed with the steamed chicken soup (原盅鮮雞湯). In other branches of Din Tai Fung I've been to, this soup has been outstanding, but the version here was lacking flavour and a bit oily to boot. And the shrimp fried rice (蝦仁蛋炒飯) was decidedly lacklustre, too. I mean, just look at the photo of the version in Tokyo on the left compared to the one in Hong Kong on the right. Rather bizarrely, the fried rice came with a konbu seaweed soup, which is a Japanese, not Chinese, affectation. That and the use of local vinegar rather than Chinkiang vinegar also grated.

So while the signature xiao long bao were excellent in Tokyo, the support acts were the weakest I've come across in any branch of Din Tai Fung I've visited. However, this is all relative, and the positives far outweigh the negatives. In particular, I was very impressed by the service. Having sensed my total lack of Japanese language skills, a Mandarin-speaking waitress from Taiwan was assigned to look after me. My Mandarin is pretty shoddy, but it was a nice gesture nonetheless. 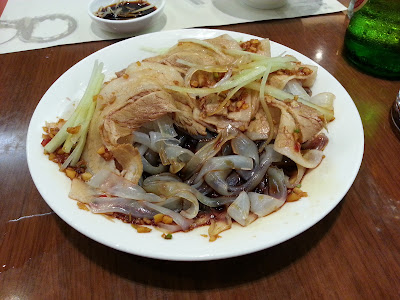 Any lingering disappointment from my visit to the Tokyo branch was soon eradicated in Hong Kong. To be precise, it was a cold noodle salad, bizarrely described in English as garlic pork green bean fettuccine (蒜泥粉皮肉), which restored my faith in Din Tai Fung. I just loved this winning combination of soft pork slices, crunchy cucumber slithers and wobbly broad fen-pei noodles in a garlicky soy vinegar dressing. 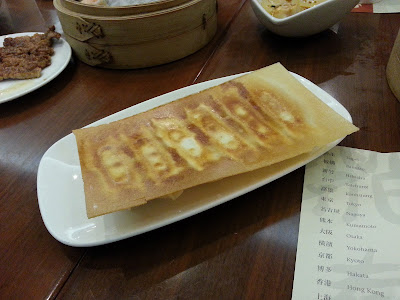 We also tried the fried shrimp & pork potstickers (肉蝦仁煎餃) for the first time, which were, as is the fashion nowadays, served upturned stuck onto a fried dumpling pastry sheet. This is a bit gimmicky in my opinion, but it did spark off a conversation of how they were constructed. These were good, but there are probably other things I'd order off the menu first. 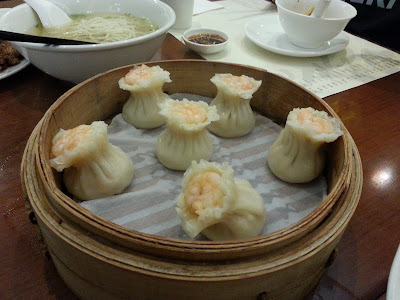 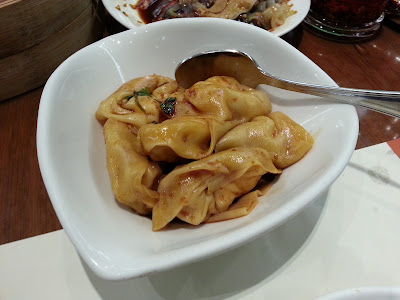 Stuff like the open-topped shrimp & pork shao mai (蝦仁燒賣) and the various wonton dishes are higher up in the pecking order in my opinion. Of the wonton dishes I preferred the spicy shrimp & pork (紅油抄手), which had a real kick, to the ones in special sauce (乾拌菜肉餛飩). Memo to Din Tai Fung management, I wouldn't use the term 'special sauce' should you decide to open in Britain.

There was other stuff, but I thought I'd go over to one of my dining companions to give his opinion. After all, he's not some dilettante blogger, but someone who's worked in kitchens most of his life and really knows his stuff. I am of course talking about Pa Noodles, and his comments over the course of the meal have been translated from Cantonese into italics:

How meticulous, there's a guy weighing out dumpling dough in the kitchen. The dumplings here really are quite exceptional; this is a PROPER restaurant, they don't take short cuts. Mind you, they could've been a bit more generous with the crab in the pork & crab XLB. My favourite? Probably the wontons in spicy sauce; the sauce has a proper kick. The pork chop with soup noodles (油炸排骨湯麵) is good, too – nice tender meat with good 5-spice flavour. But the rice, the fried rice, it wasn't fluffy enough, a bit too hard. But anyway, I like it here. Is there one of these in London? It'd make a fortune there.

A fair assessment by Pa Noodles, although I think he was a tad harsh about the rice! My mum liked Din Tai Fung too, although she didn't really rave about it. The thing is she's rarely effusive about food that isn't Cantonese. And my colleague liked it so much he's planning to visit the branch in his hometown of Sydney. Me? I've been to the Causeway Bay branch in Hong Kong four times now, and I love it. If only they could open one in London – I know it's a forlorn hope, but here's the link to my petition anyway.
Posted by Mr Noodles at Monday, June 03, 2013