Following my trip to Bangalore, I spent a couple of nights in Singapore. While it really was a flying visit, I did have a spare Sunday to kill. This, of course, could only mean one thing: a noodle crawl. But this wasn't any normal noodle crawl, as Shu Han, author of Mummy I Can Cook, provided me with a list of noodle stalls I HAD to sample in Singapore. I couldn't visit all of her suggestions, but I thought going to three of them was feasible. 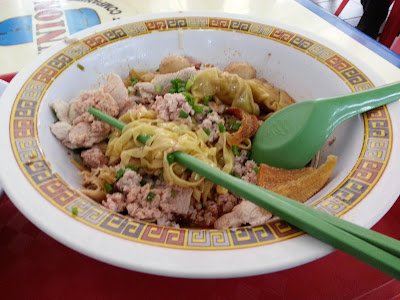 First up on my itinerary was a famous stall called Hill Street Tai Hwa Pork Noodle. Having arrived just before 11.30am, I thought I might miss the lunchtime rush. How wrong was I. In the end, I didn't get to eat my noodles until 12.50pm. I was going to go for either the S$6 or S$8 priced bowl, but having queued for so long I went for the large S$10 bowl of bak chor mee (肉脞面). Given the length of time I queued, I was kind of cursing Shu Han. However, any ill will I may have had towards her soon dissipated when I tucked into this sumptuous dish of springy broad mee pok noodles (面薄) in a spiky mix of chilli and vinegar. The generous toppings of ground pork, sliced pork, meatballs, wontons and bits of crispy fried fish were good quality. (I asked for no liver, as I'm not the biggest fan.) On the side was a bowl of seaweed soup that I used to loosen up the noodles that can clag. With hindsight I should've asked for more chilli, but overall this was the finest bowl of noodles I've sampled so far this year.

I was ahead of schedule when I left the hotel but I was now some way behind. Having heard that the Hill Street Fried Kway Teow stall often sell out early, I decided to change my plans and headed east on the MRT to Bedok New Town to sample their char kway teow (炒粿条). Yet again there was a queue, but mercifully I managed to get my noodles by 2.10pm. 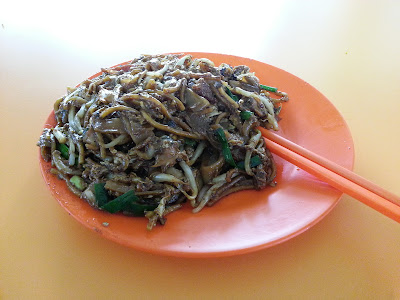 I'll be honest. Char kway teow isn't really one of my favourite noodle dishes, but this version could change my mind. It really did have the breath of the wok (鑊氣 wok hei) with a perfect balance of smoky, sweet with a hint of chilli heat. I went for the small S$3 portion, so there weren't as many cockles and Chinese sausage as I might have liked. This version had some egg noodles as well as ho fun rice noodles in the mix, but my favourite part of this dish were the crispy bits of pork fat. Mmm, pork fat.

After this second helping of noodles, I was a bit full. And having travelled so far out to Bedok, I decided to go for a stroll around the town centre. This would prove to be a big mistake. I thought I had time on my side, but by the time I rolled up to the Old Airport Road Food Centre, it was too late, too late to try the noodles at Nam Sing Hokkien Fried Mee. The guys at that stall had sold out of stuff by the time I got there. I felt that I had failed in my noodle quest, but then a phoenix rose from the flames. Well, more precisely a crumpled bit of paper with Shu Han's noodle tips on it. On there were the words: 'try fishball noodles at Old Airport Road???' and that's what I did. 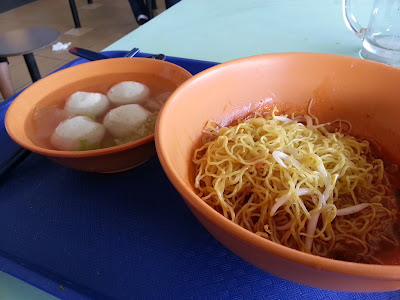 I'm not sure how I came across the simply named Teochew Fishball 潮州魚丸 stall, but I do remember the fishball uncle asking me 'nei sik mat ye?' in Cantonese. Bowled over by his friendly greeting of 'what do you wanna eat?' I went through the various options with him: wet or dry? noodle type? fishballs or a mix of fishballs and fishcake? I plumped for dry fishball noodles (S$3). 'Dry' in this context means that the fishballs are served in a separate bowl of broth (by the way the broth is pretty flavourless, as its primary purpose is to loosen up the noodles). Springy is the word I would use to describe both the fishballs and thin noodles. Together with a zingy chilli dressing, this was a superior bowl of noodles. 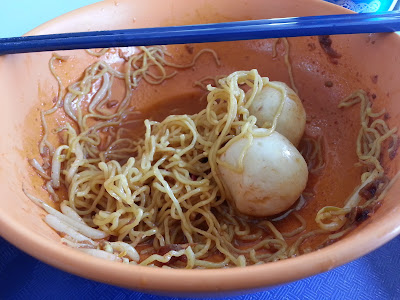 Notwithstanding the Hokkien mee fail, the noodle crawl was a great success. If I were to do it again, I would have a late breakfast at Tai Hwa (I later found out the stall opens at 9am) before going onto the other stalls at Bedok and Old Airport Road. With a 9am start and allowing for travel time, I reckon you would be all done shortly after noon.