Perhaps it's an indication of how far the dining scene in London has developed that one, occasionally, feels underwhelmed when eating out. In particular, some of the capital's smarter postcodes have the dullest food. You know what I mean, parts of town where the food lacks imagination so as not to frighten the locals and their perceived 'vanilla' tastes. However, if one doesn't feel the need to be overly-dazzled by something too different then The Lawn Bistro, in genteel Wimbledon Village, pushes all the right buttons. Having said that, I'm probably doing it a slight disservice, as the food does have some flourishes. 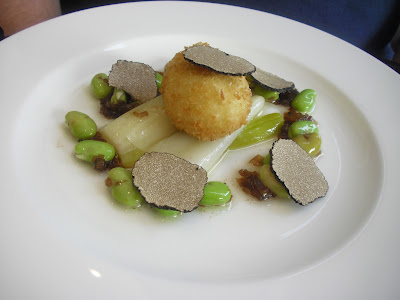 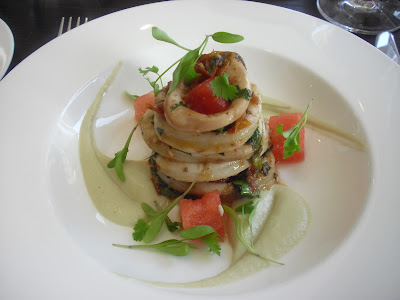 Take the starters of leeks w/poached egg beignet, broad bean vinaigrette & summer truffles and squid & watermelon salad w/fennel puree, chilli, garlic & ginger. These excellently presented, well-executed, refreshing dishes hit the spot in the scorching early-September sunshine. Of the two, the former was the winner with its runny egg (with a wonderfully crispy exterior) perfectly complementing the leeks, generous helping of truffle shavings and tart broad bean salad. In contrast, my choice of squid could've done with a bit more chilli heat to act as a contrast to the refreshing watermelon. 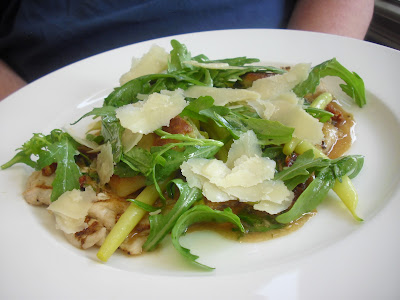 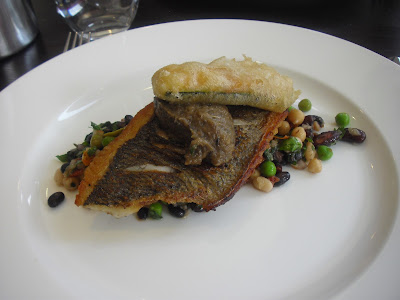 Onto the mains, and the grilled chicken breast 'Paillard' w/herb gnocchi, mixed leaf salad & gremolata and crispy fillet of sea bream w/Spanish bean salad, sundried tomatoes, aubergine relish & courgette also hit the spot. Chicken can be dull, but the herb gnocchi and gremolata were the ideal accompaniment to the flattened chicken breast. I had no complaints about my perfectly cooked fish, and all of the elements of the dish worked well, especially the battered courgette. 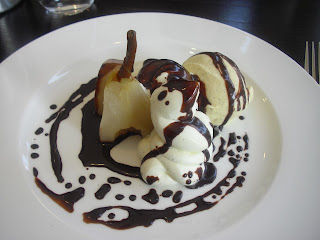 Desserts in the form of poire belle Hélène and Valrhona chocolate mousse w/crème Anglaise & flapjack finished off the lunch nicely. After all, what's not to like about poached pear with cream, ice cream and chocolate sauce? And while a combination of chocolate mousse with flapjack may seem a tad unusual, not even its presentation atop a wooden slab could detract from my friend's enjoyment.

Combined with professional service, that mercifully stayed the right side of over-familiarity, and an airy, elegant dining room, The Lawn Bistro proved to be a most agreeable lunch venue. Considering its prime location in Wimbledon Village, Sunday lunch was priced fairly at £29.50/three courses and one can very easily get away with paying £50/head with wine and 12.5% service. All in all, this restaurant is a welcome addition to the Wimbledon dining scene, and it's good to see an indie take on the chain-mediocrity of the likes of Côte et al. Mind you, I wouldn't go so far to call it a destination restaurant for those without a SW postcode.