The Lunchtime Legends of Eat St

[Update Oct 2012 - Eat St is no more, but in its place is Kerb. Pretty much the same traders are operating under this banner, and they continue to operate on King's Boulevard.]

Those of you that follow me on twitter or instagram are probably already fed up of me forever banging on about how great my lunch from Eat St is. For those not in the know, Eat St is a collective of street food traders that can be found on King's Boulevard (round the back of King's Cross station). It's quite a loose collective; the various stalls come and go, and don't necessarily always operate on the same day of the week. So it's best to check out their website to see who's on when. 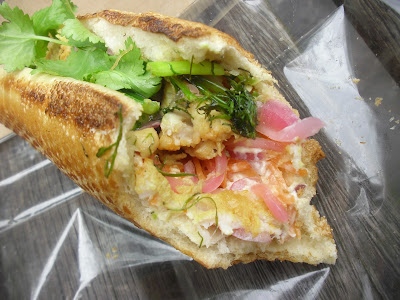 I'm hard pushed to name a favourite, but I think Bánhmì11 just edges it. After all, I was pretty gutted when they took a break from Eat St earlier this year. Not only do these guys knock up great bánh mì (Vietnamese baguettes) but their beef pho noodle soup is pretty damn tasty, too. If you're going for bánh mì, I recommend either the Fish Q (grilled catfish marinated in turmeric and galangal), or the Imperial BBQ (grilled pork marinated in caramel and lemongrass). 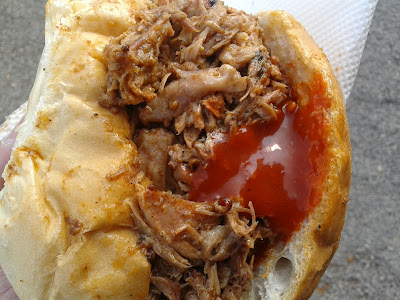 On another day, I may have chosen The Ribman as my favourite. In a short time, this fella has become a bit of a legend with his ribmeat rolls (or wraps for the lightweights) topped with a bit of smokey BBQ sauce and/or the notorious Holy F**k hot sauce. Being a northerner, I like to playfully mock southern portion sizes, but The Ribman doesn't skimp. In fact, the only fault I can find with him is that he's a devoted West Ham fan. 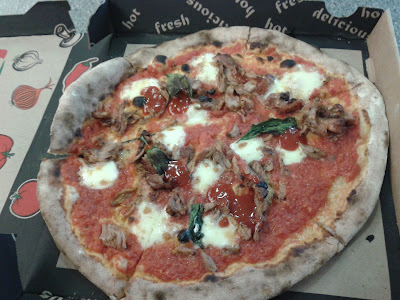 I also like Homeslice, who knock up fantastic pizzas, despite coming from a small country located somewhere in the south Pacific called New Zealand. Seriously though, the ribmeat pizza (with ribmeat provided by The Ribman) is a must-order. Otherwise, the chorizo & rocket is a top choice. The pizza can be ordered by the slice or whole. Recently, I've become a big fan of Eat My Pies, who knock up pies and pasties (both hot and cold) as well as a range of Scotch eggs. But as much as I like the occasional rabbit pie or smoked haddock Scotch egg, the custard tart eclipses all of their savouries.

Other stalls that I like include the much-underrated Tongue 'n Cheek whose ox cheek with polenta is a favourite of mine, and the new kid on the block: Mother Flipper with their signature double candy bacon burger. And if you have room for something sweet, the salted caramel whoopee pies from Kookybakes always hits the spot.

In fact, such is the diversity and quality of the food found on Eat St, I've only just remembered that the likes of Big Apple Hot Dogs and Yum Bun (both big names in the London street food scene) are Eat St regulars. And I have no doubt that there are other favourites that I haven't mentioned in this post!

I don't want to get too preachy, but in my opinion Eat St is far more important than the multitude of high-end Michelin-starred restaurants with big name, big bollocked chefs that operate in London. And that's because I believe that the richness of a food culture is defined by the quality of everyday food from the bottom-up rather than posh food from the top-down. And while the street food scene in London won't be troubling the likes of Hanoi anytime soon, we should treasure the lunchtime legends of Eat St.

PS: All of the traders mentioned in this post are not exclusive to Eat St's site on King's Boulevard. They also work other pitches across London such as Brick Lane Market, Broadway Market and Brockley Market.
Posted by Mr Noodles at Monday, May 07, 2012