Tsuru Ramen - The Verdict So Far... 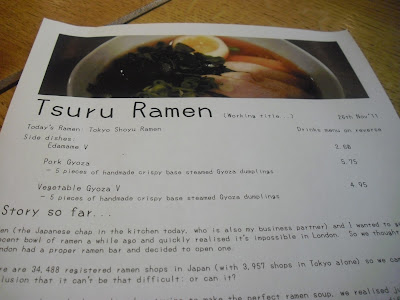 Cast your mind back to the end of October. Do you recall the heightened anticipation? Do you remember the rumours, the rebuttals and the counter-rumours? Then came the frenzied scramble for tickets. Inevitably the first couple of dates sold out, and a third was quickly added. You can't imagine how chuffed I was when I managed to bag some tickets. After all, for many of my generation, it's what we've been waiting years for. That's right, the promise of decent ramen in London, courtesy of those peeps at Tsuru. And oh yeah, I nearly forgot, The Stone Roses reformed and announced tour dates around the same time too.

Tsuru's owners are currently looking for a site for a ramen restaurant, but in the meantime they are testing out different ramen recipes at a series of ticketed events at their Bishopsgate branch. The first event featured shoyu ramen, so-called because the broth is made with shoyu (soy sauce) and a meat-based stock. Truth be told, this isn't my favourite, as I can't see the point of adding soy sauce to the stock. That said, I thought the broth was of a very high quality.

I also thought the toppings of tender pork belly, spring onion, wakame (seaweed), menma (fermented bamboo shoots) and boiled egg were also spot on. The addition of menma was an authentic touch as was the egg, which took on both colour and flavour from being marinated in the shoyu broth.

The noodles were decent quality, and had sufficient spring to the bite. If I was to be ultra-critical, they could've been springier, although I'm not suggesting that they were over-cooked. I liked this dish, but as an all-round bowl of noodles, it isn't quite as good as the shoyu ramen at Roka. Mind you, that's understandable given that this was Tsuru's first stab at ramen.

The second event showcased my favourite kind of ramen: tonkotsu, which features a broth made with pork bones. I liked the broth but it lacked that really pungent aroma (that some find off-putting) which top quality tonkotsu has. Whilst Wen (of Going With My Gut) thought the broth lacked a bit of fat, and following her feedback, she was given a small sample bowl of a greasier broth. I had a try of this 'dirtier' broth, which I preferred; although I appreciate it might not be to all tastes.

This bowl of ramen was topped with pork, spring onion, beansprouts and boiled egg. As with the shoyu ramen, the pork and boiled egg were top class. However, I'm not so sure about the beansprouts; I would've much preferred some menma and nori (dried seaweed) instead. And as with the shoyu ramen, the noodles were springy enough. It might not have been my ideal bowl of tonkotsu ramen, but I did enjoy it.

Despite my minor gripes, I'm pleased with Tsuru's ramen so far. It isn't easy to get soup noodles right, and their first efforts are better than many found in London. Not only that but I'm very impressed by their desire to do things properly (including a research trip to Japan in 2012). This can only be a good thing, and I'm hoping that Tsuru find a permanent site for a ramen restaurant pronto.

In the meantime, Tsuru are hosting further events in 2012 featuring Tokyo Spicy Ramen (Jan 7), Hokkaido-style Ramen (Jan 21) and a second helping of Tonkotsu Ramen (Feb 4). Each event cost £10, which includes a bowl of noodles and a drink. For further details about booking and availability, please click here.
Posted by Mr Noodles at Thursday, December 15, 2011