[Update Oct 12 - a second branch of Kaosarn has opened in Battersea and is reviewed here.]

Assuming my maths isn't wrong, Kaosarn has the proud honour of being the 100th London eatery to feature in my blog. And it's entirely fitting that somewhere like this Thai café gets that accolade. Whilst I really can't be that arsed to write about eating out in London nowadays, I will always blog about inexpensive unpretentious indies like Kaosarn. Especially when they have noodles on the menu! 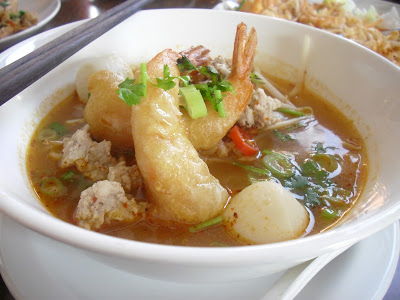 I did consider going for Kaosarn's signature dish of gai yang khao neaw som tum (£11.50) – but I wasn't hungry enough to take on this combination of half a grilled chicken, sticky rice and som tum. Instead I plumped for soup noodles in the form of kuay tiew tom yum Bangkok style (£6.90).

The most important aspect of any soup noodle dish is the soup. And in this case, the tom yum soup was bang on the money, with deep hot and sour flavours seemingly sans any artificial enhancements. After that, it's imperative that the noodles are properly done, and I'm pleased to report that the slippery smooth kuay tiew rice noodles were. 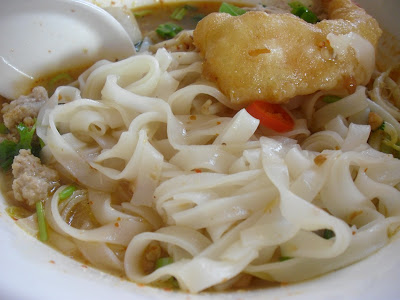 The toppings of deep-fried king prawns, fishballs and minced pork were also pretty good. My favourite were the prawns, and if you order this dish, do polish them off before the batter gets soggy. The fishballs were bought-in, but don't be put off by that, as few places make their own – that'd be akin to a gastropub making its own sausages. All told, one of the best noodle dishes that I've eaten in London this year! 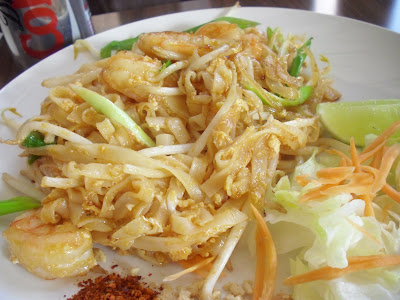 Not everything was just so, though. For instance, one of my dining companions was less than enamoured by his pad Thai w/prawn (£6.90). Having said that, he didn't mind his starter of coconutty chicken soup aka tom kha gai (£4.90). 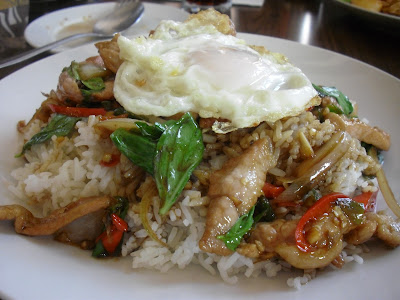 My other dining companion plumped for khao pad kra-proaw w/pork (£6.90), a very home-style stir-fry with chilli and holy basil. It was nothing special, but I liked the fact that it came with a runny fried egg – a very east Asian touch. 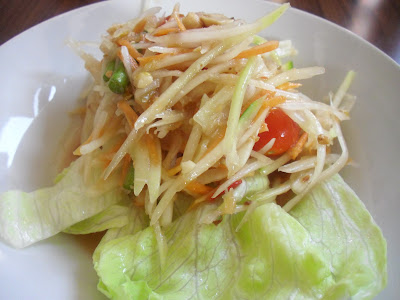 We also shared a side of som tum Thai (£4.90); this papaya salad is often dumbed-down and disappointing in London. This one, I'm pleased to report, was the real deal with a proper fiery kick.

Whilst not every dish was a winner, there's more than enough promise at Kaosarn for me to return. Ironically, the only thing working against this superior Thai joint is its location in Brixton Village. As any foodie knows, there is so much choice in this complex that it could be a while before you return to the same place twice! For example, in addition to Kaosarn, I've 'done' Elephant, Honest Burgers, Federation Coffee and Lab G, and on top of these joints, there must be another dozen, if not more, places to check out!

PS: Special thanks to Kay for reminding me that my blog was coming up to a century of London eateries!
Posted by Mr Noodles at Friday, October 14, 2011