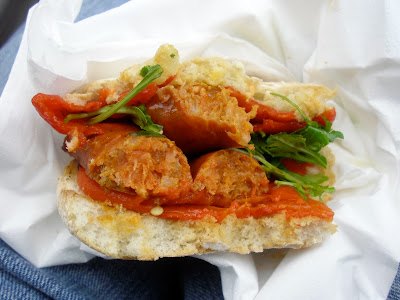 I don't know about you but whenever I visit Borough Market, I just have to grab a bite to eat. It's the only way to cope with the ever increasingly stressful ordeal of visiting this market on a Saturday. I usually go for a double chorizo sandwich from the open grill outside Brindisa. However, I fancied a change one Saturday, so I wandered over to Roast To Go.

Whilst in the queue, I began to daydream about an imaginary battle between these two stalls to decide who is The King of Borough Market. The film running through my mind is a gangland drama with Ray Winstone, exuding his trademark quiet malevolence, playing the head of the Roast mob. Javier Bardem portrays the boss of the rival Brindisa gang boss, for the simple reason that he's the first Spanish actor that popped into my head.

As with most big Spanish films (real or imaginary), Penélope Cruz is in it and it was at the point when her character was abducted by Winstone's that I reached the front of the queue. My screenplay would just have to wait; although I'm pretty sure Pedro Almodóvar won't be calling anytime soon.

Back at Roast, I duly ordered the pork belly with apple sauce sandwich (£6). Unfortunately, it was bland and tasteless. To add insult to injury, the crackling was chewy and not even the apple sauce could lift this poor effort. It really could've done with some stuffing or gravy but even that wouldn't have disguised the fact that it was overpriced and under-seasoned. 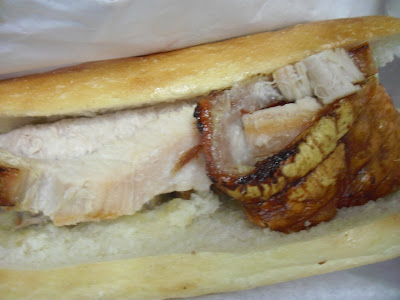 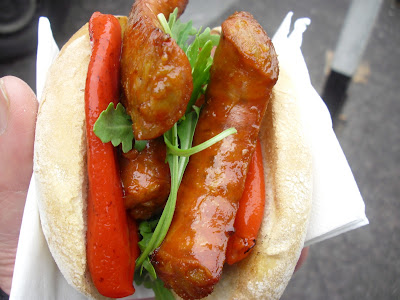 In contrast, Brindisa's trusty old double chorizo sandwich (£4.85) shows Roast how it should be done. There was always going to be more flavour, as chorizo naturally has, but it was the sweet piquillo peppers that nearly stole the show. Not even the presence of devil-weed (rocket) could spoil this superior sarnie. It's no wonder that there's always a queue for this beauty.

So, there's only one winner in the Battle of Borough Market and that's Brindisa, which isn't really much of a shock. Anyway, now we've established that, I know you're all dying to find out what happens in the rest of my screenplay, 'The King of Borough Market'.

Bardem rescues Cruz from the clutches of Winstone, who follows in hot pursuit. However, the Spanish gang leads Winstone's mob into a trap at a deserted Borough Market. Bardem has Winstone on his knees but spares him on the understanding that the Englishman will learn how to season pork belly properly. OK then, I guess I won't be giving up the day job anytime soon but I can always dream!
Posted by Mr Noodles at Saturday, November 20, 2010