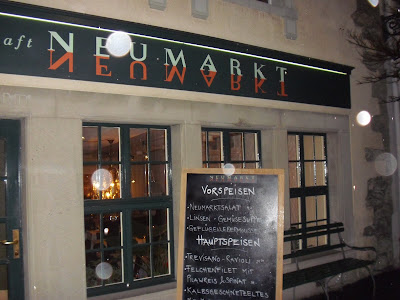 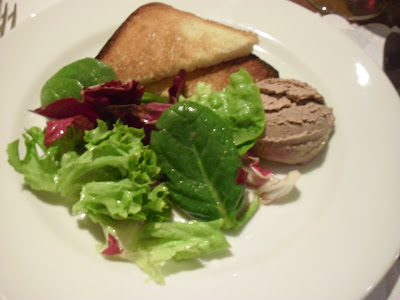 I know I'm going to come across as whiny and spoilt but eating out on business trips can be hard work. Dinner alone with a book is something I can cope with as a one-off but really it isn't much fun. Sometimes, the local office take you out for dinner but even if your host is uber-convivial, there's a fair amount of shop talk and you can't quite escape the feeling that you’re still at work.
Anyway, I'm very lucky that my mate, Soft Aussie calls Zürich home so at least on one of the nights, I could relax. Joining us was Mr X, Soft Aussie’s mate who's also based out in Switzerland. Over a quick snifter, we mulled over the dinner options. Having briefly considered Chinese, we decided to search for spätzli, the German noodle that is also hugely popular in Switzerland.
We started our search in the Old Town and we searched and we searched but the weather was crap. So in the end, we decided to dive into Neumarkt on the basis that it looked like the kind of place that might serve spätzli. Sadly they didn't but they did have a mix of traditional and modern Swiss dishes on offer.
The Swiss love their bread and it seems every restaurant you go to, it's pretty good and Neumarkt was no exception. For our starters, the guys boringly went for salads (another Swiss fave, especially with lambs lettuce), whilst I had the chicken liver mousse (photo at top). Just what is it with pâté type things; you just never get enough toast. It was decent but what else can I say. 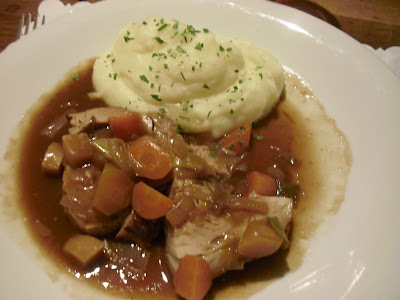 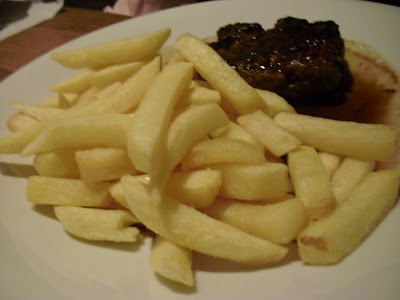 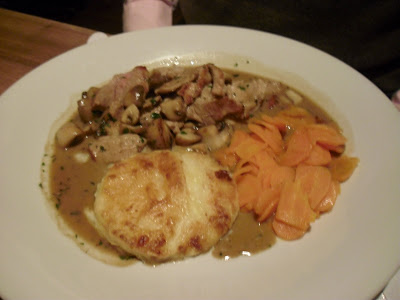 Onto the mains and being a Swiss restaurant, I couldn't get overly excited about these. I ordered roast shoulder of veal w/mash & carrots. The veal was very tender and whilst the dish was a bit rich and heavy, it suited the mood I was in. Swiss Aussie went for a lamb burger w/chips and Mr X, sliced veal w/potato gratiné & carrots. All the dishes were tasty but none set the pulse racing.
However, for all the ordinariness of the food, we all enjoyed dining here. Not least, due to the elegant dining room and in my opinion the star of the evening, a rather fine bottle of red. I don't usually write about wine but I thought the Dôle La Liaudisaz (2008) was a real star; this blend of Pinot Noir and Gamay was fresh, fruity, fragrant, and given how well it went down, silky smooth. So it was a bit of a shame, the wine glasses provided were sub-standard (I'm learning a thing or two from Mr. Wine).
The puzzle was where did this wine originate? Initially, I thought it might be France until I remembered that the French never mix Pinot Noir with Gamay. {Correction - that last sentence is incorrect. the French do mix these two kinds of grape in Bourgogne Passe-Tout-Grains. Big thanks to Londonchinese - I guess I really ought to stick to writing about noodles!}. The label was a bit trendy but it gave no clues as to the origins and nor did the wine list. I didn't think to ask at the time and it's only when I returned home that I had a yearning to find out more about this wine.
Then it dawned on me, could it be Swiss? My research reveals that both Pinot Noir and Gamay, are grown in Switzerland. I did some more research and I found the website of the producer, Marie-Thérèse Chappaz. I felt a bit of a fool when I discovered that Dôle in the name Dôle La Liaudisaz refers to a type of Swiss wine consisting of a blend of Pinot Noir and Gamay. Our bottle was a 60% Pinot Noir/40% Gamay blend – the high Gamay content may have explained why it seemed a bit lighter than Burgundy. I'm looking to track down a bottle of this stuff in blighty!
The only minor blemish on the evening was the service as our waiter was a bit crap. Every other table seemed to be served by someone efficient and charming but we ended up with a slightly slow inelegant chap. He particularly hacked me off with his nonchalant attitude towards wine drips. To avoid further conflict, I assumed wine pouring duty.
Zürich isn't a cheap city but being a bit off the main Old Town drag, Neumarkt isn't a tourist trap. Two courses here cost roughly SFr50 or £30/head, which is reasonable for Zürich although I wouldn't pay more than £20 for the equivalent standard of food in London. The wine was actually one of the cheaper bottles and cost SFr54 (£34), which I thought was reasonable until I found out that it retails for around SFr19 (£12).