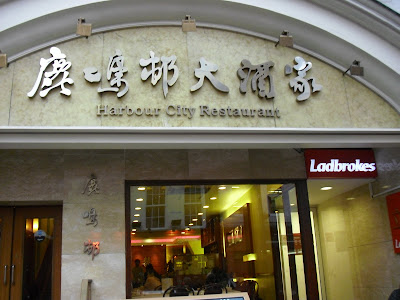 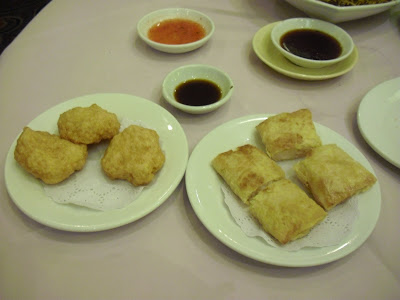 I couldn't write about old school dim sum without actually going for a big blow-out. The obvious venue was Chinatown – home to many old school joints – and I decided to check out Harbour City. I hadn't been to this Gerrard St stalwart in years but my curiosity was aroused by Bellaphon. For this post, I decided to draft in some expert help in the form of Helen aka World Foodie Guide. Sadly, Helen doesn't blog anymore but her guide on where to eat dim sum in London remains essential reading.

Now you might think Chinatown is the place to go yum cha but those days are long over. Nowadays, London's best dim sum is found elsewhere, my regular haunt is Phoenix Palace whilst Helen favours Pearl Liang. That said, it's handy to have somewhere in Chinatown to fall back on for dim sum - would Harbour City be that place ?

First impressions weren't great. Whilst I didn't mind the slightly dated interior, I did mind not being asked what tea I wanted. In fact I think they poured it before I even had a chance to take my coat off. We also seemed to have walked in on a staff training session as a Cantonese speaking waitress was training up a Mandarin speaking waiter when taking our order. I'm not sure why they don't have the 'tick sheet' menu common in most dim sum places – it would have made life much easier. That said ordering wasn't too much of an ordeal as the menu was bilingual and from it, we went for a mix of steamed dishes, fried snacks and the rest....... 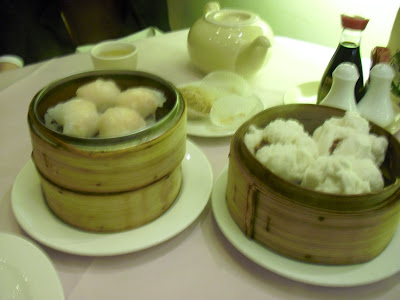 Har gau (prawn dumplings) are usually a good indicator of the quality of a dim sum restaurant. The wrapper should be thin and translucent whilst the prawn filling should be well seasoned and not be minced too finely so as to retain some 'bounce'. The dumplings here just about pass the test, if anything the wrapper was too thin as it broke on contact with the chopsticks.

Cha siu bao is a classic and like most dim sum, you get three in a portion. But Helen and I are old enough to remember the golden age when these steamed bbq pork buns had a more generous filling and were so big that the basket could only fit two buns. Whilst the buns here were larger than what passes for average nowadays, they were sadly more bao than cha siu. Steamed whelks in curry sauce were quite moreish although like the rest of the steamed dim sum, nothing special. 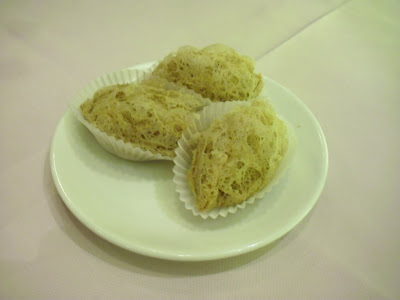 Moving onto the fried snacks, these were competently executed with none of the stale greasiness that afflicts some dim sum places. We ordered wu gok (yam croquette), grilled bean wafer with minced prawn paste filling (of our order, this was Helen's fave – it was bit like a large spring roll made with a bean curd skin wrapper) and mak yu beng (fried cuttlefish cakes). There wasn't much wrong with these snacks but I thought they lacked finesse.

In particular, I couldn't help but compare the mak yu beng to Phoenix Palace's version which is studded with finely chopped water chestnuts that give it crunch as well as bounce. I realise how ridiculous that last sentence reads and you're probably thinking 'what a fussy ****' – well you’d be right but that's what eating dim sum for over 30 years can do to a man ! 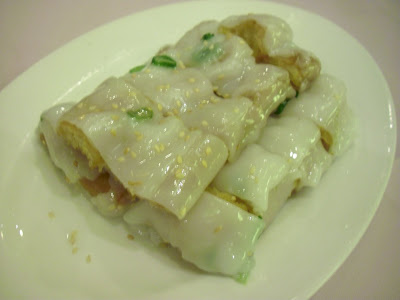 Cheung fun is a dim sum essential and my favourite is zhaliang – in my opinion, this was probably the pick of the bunch as there were signs of delicacy absent from the rest of the order. The fried dough stick wasn't greasy, the rice noodle wrapper was silky smooth, and the soy was served on the side to prevent the dough stick getting soggy. Its dishes like these that underline the superiority of the old school.

A dim sum session isn't complete without siu mei and noodles so I killed two birds with one stone by ordering three roasts with fried noodles (sam siu chow mein). There were no complaints about this healthy portion of cha siu, siu yuk, roast duck, and pak choi sat atop crispy fried noodles.

The dim sum is very cheap here with prices starting at £2.10 and the damage was roughly £28 for two including tea and service – although the bill was presented in that typically opaque Chinatown way. I did over-order and I bagged up some of the leftovers to take home so if you ditched the noodles, you could probably get away with spending around £10/head. Service wasn't bad by Chinatown standards – let's put it this way, my only real grumble was not being offered a choice of tea.

I can imagine if you were a long time regular at Harbour City then you'd feel quite at home but unfortunately I'm not. Both Helen and I thought it was distinctly average and whilst the dim sum was far from bad, I'd be hard pushed to think of anything that would lure me back.

I also realised over the course of this lunch, how much I missed the bells and whistles of high-end old school places like Phoenix Palace. It wasn't just about the better food and service, I also missed the small touches like being able to choose your own tea, the little name label on the teapot lid, and most importantly, the water chestnuts in the mak yu beng.

Verdict: If you happen to be in Chinatown and have a sudden dim sum craving then Harbour City is a cheap and cheerful option. That said I wouldn't go out of my way to eat here.

Other Stuff: Helen recommends Leong's Legends as the go-to place for dim sum in Chinatown although I've yet to try it.