Chilli Cool is one of a new breed of Chinese restaurants popping up across London that cater to a largely mainland Chinese crowd. It's particularly popular with University of London students as its Leigh St location is very close to the Halls of Residence. There aren't many concessions to non-Chinese clientele so don’t expect to order sweetcorn soup and sesame prawn toast. The few non-Sichuan dishes on the menu like dong-po pork and stir-fried shredded potato are those favoured by mainland Chinese. 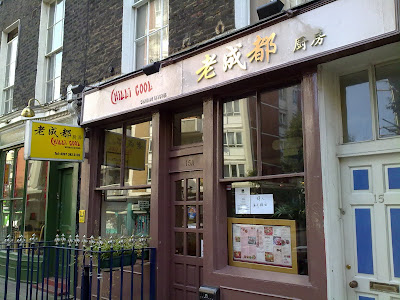 I wasn't going to review Chilli Cool as it's been blogged to death but I took a few photos on my phone just in case. Even then I wasn't sure as I'm a regular here and I feared that my review would be biased. However when this restaurant was criminally ignored in the Time Out 2010 Eating & Drinking Guide, I thought I'd redress the balance. Yeah that's right - me humble blogger setting the printed media to rights. Well perhaps not, I'm not that conceited to think that a post on my blog will compensate for a non-appearance in London’s top restaurant guide !

Now Chilli Cool isn't going to win any awards for its interior design, use of English in the menu or erratic service. However there is something about its home-style cooking that wins me over every time I come here. Although Sichuan food is associated with being hot and spicy, milder dishes shouldn’t be ignored. There were seven of us so there was plenty of scope to order a wide range of dishes. 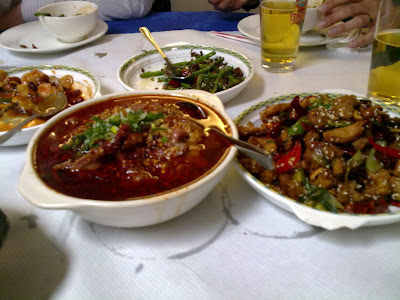 In ascending order of heat, we ordered sea spicy shredded pork (yu xiang rousi) - mild, slightly sweet and served with woodear fungus - a gentle introduction. Double cooked pork (hui guo rou) - so called as pork is boiled then sliced and fried, looks like bacon and crisps up nicely when fried in the wok. Gong bao king prawn with peanuts - doesn't really need too much of an intro although I can’t remember much about this dish as I only managed to bag one prawn ! Stir fried before stewing the jack bean dry (siji dou) – better known as dry-fried green beans - a must-order in any Sichuan restaurant. Despite being fried with dried chillies, this dish isn't overly spicy.

So far so tame but now we enter the heat zone, quick frying chicken with cumin & chilli (lazi ji) - deep fried chicken bits tossed in a wok with Sichuan peppercorns, ginger, dried chillies, cumin, spring onion and peanuts. Unlike the version, I had at South Beauty, the chicken is off-the-bone and there are no annoying bits of Bombay-mix. Possibly my favourite Sichuan dish and as good as you get in China.

As well as steamed rice, we ordered double portions of dan dan noodles and minced pork dumplings with chilli oil (hong you shuijiao) and these sound renditions of Sichuan street food just about finished us off ! It was lunch but if it was dinner, we might have ordered an extra dish or two. As you can see, we didn’t leave much behind although they're happy to oblige if you need a doggy bag. 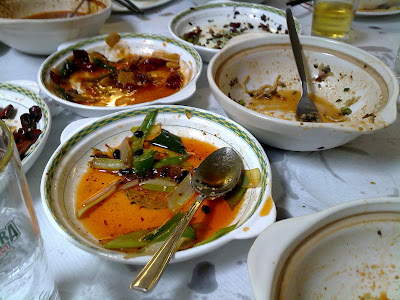 If we ordered tap water, this feast would’ve only cost £11 per head but we had a couple of rounds of beers so the damage was £17 each – still a bargain ! Even if you added some extra dishes, you'd struggle to spend a fortune in here. Service can be erratic but they are always apologetic if they are slow or get things wrong.

Verdict: Giant portions of tasty authentic food at bargain prices – what's not to love ? Much better than the nearby Snazz Sichuan which Time Out did include in its annual guide.

Other Stuff: Chilli Cool has just taken over the next door premises where they've set up tabletop cookers to serve Sichuan hotpot. I'll definitely be trying this soon.

Update July 2010 - I remain a frequent visitor to this excellent restaurant and standards remain high. For some belting photos of a recent dinner, check out these reviews by Catty, Uyen, and The Grubworm.
Posted by Mr Noodles at Wednesday, October 07, 2009