Despite being Japan's second largest city, Yokohama isn't high-up on most tourist itineraries. This is probably due to it being perceived as a suburb of Tokyo as well as lacking traditional tourist attractions. That said, if you're staying in Tokyo then I reckon it's well worth making the short trip to Yokohama. But I would say that, as Yokohama is home to the Shin-Yokohama Ramen Museum! 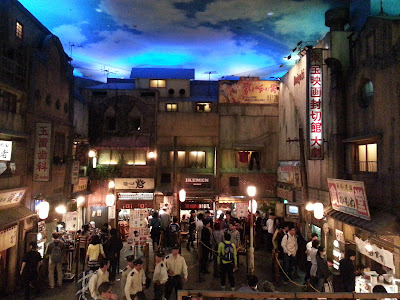 This homage to ramen opened in 1994 and is spread over three levels. The ground floor is taken up mostly by a gift shop (more on that later) but the main part of the museum consists of a recreation of a 1958 Tokyo street scene spread over two subterranean levels. It's all a bit kitsch but I don't really care, as there are no less than nine ramen shops - all outlets of famous ones from all across Japan - to check out. 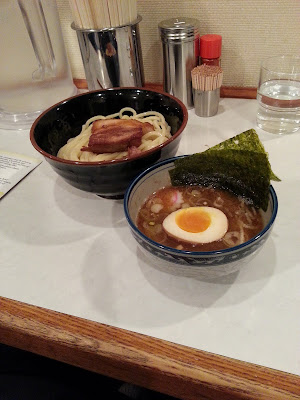 After a quick scout around the various joints, I decided to visit Ganja to check out their dipping ramen. Ordering is by machine and with some help from a waitress I selected one of the taster portions (these smaller portions are available to enable punters to sample more than one shop). To be honest, this wasn't really my cup of tea. I didn't mind the noodles being cold, but I would've preferred the dipping tonkotsu-shoyu broth to be hot, not lukewarm (by the way I have no idea what the 'correct' way should be). On the plus side the toppings, especially the belly pork, were top notch and the broth was packed full of flavour. It's just that the overall combo would have been better served all in one bowl. 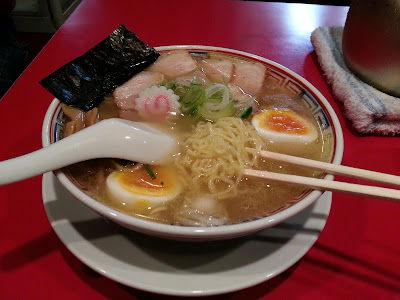 By the time I left Ganja, the museum was starting to get busy and queues were forming at some of the shops. Taking a punt on the wisdom of crowds I joined the longish queue for Kamome-Syokudo, which I thought was a tonkotsu joint but in fact served shio ramen (this just goes to show that I can't read Japanese, especially when hungover). This time I went for a normal size portion and while the toppings were abundant and of good quality, being a shio-based broth it wasn't really what I was after. That and the fact the broth was far too salty for my liking. I may have chosen badly, but neither ramen shop I went to in the museum was as good as those I'd visited in Tokyo. Mind you, there were seven ramen shops at the museum I didn't try. 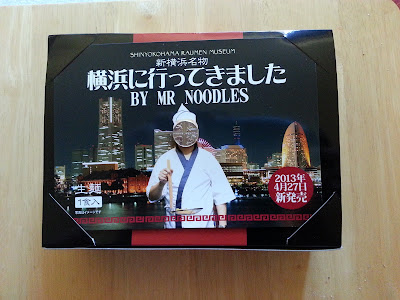 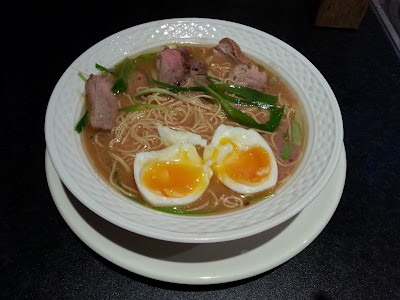 Feeling quite full I left the year 1958 behind me and popped upstairs to the gift shop. I went over to the design-your-own-ramen section where you can pick out your choice of soup, tare (seasonings) and noodles to take home in a souvenir box. I plumped for a mixed broth consisting of a sachet of tonkotsu (pork bone broth) and a sachet of rich chicken stock. For the tare I went for shoyu (soy sauce) with a pack of shrimp oil for good measure. And last but not least, I chose some thin ramen noodles to complete my ensemble. I then had to suffer the humiliation of having my photo taken that was then stuck on the top of the box. The end product tasted better than anything out of a packet had any right to, although it is clear that my egg boiling skills need honing. 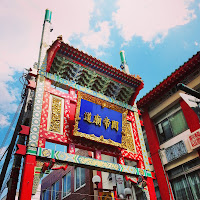 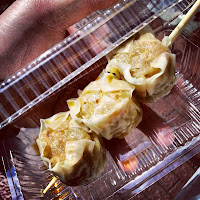 If you do decide to go to the ramen museum then I also recommend you visit Yokohama's Chinatown (Japan's and some say Asia's largest Chinatown). Save for a cheeky skewer of siu mai, I didn't eat there but from what I could see the eateries serve a wide range of food from authentic dim sum to Japan-ified Chinese dishes. However, Yokohama's Chinatown is more about walking around and savouring the atmosphere than the food. That and, if you're of Chinese-descent, topping up the Chineser points. I enjoyed my day trip to Yokohama and with its ramen museum and Chinatown it can boast two attractions that Tokyo can only envy. In other words: Yokohama 2 Tokyo 0.
Posted by Mr Noodles at Monday, May 20, 2013