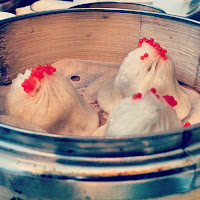 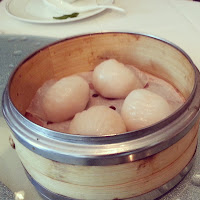 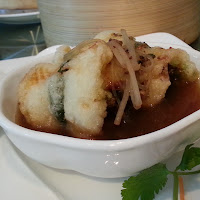 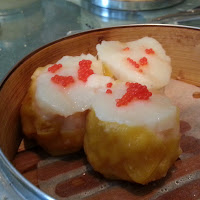 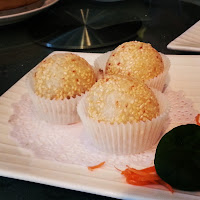 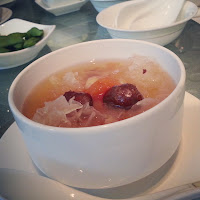 
Go, just go. Surely the photos have already convinced you. I won't bang on about Bright Courtyard too much, but its dim sum is amongst the best in London.


The xiao long bao were the best I've had in London whilst the har gau and scallop siu mai were top notch, too. Other classics such as fried cuttlefish cake, cha siu bao and cheung fun passed muster, although the one relative let-down was the pedestrian wu gok (taro croquette). And let's not forget the braised e-fu noodles, which were also, you guessed it, pretty tasty!


Going slightly off-piste, I preferred the deep-fried almond prawn balls with its soup filling to the deep-fried prawn & mango dumpling. However, both were eclipsed by the exemplary sea bass roll; crispy fish wrapped around julienned mooli (and other stuff) sat in a Sichuan peppercorn-infused puddle of dressing.

The sweet stuff such as snow fungus in papaya sweet soup, pumpkin dumplings and black sesame-filled balls were also of the highest quality. Dim sum like this doesn't come cheap with prices of individual dishes starting at around the £3.50 mark. Our bill came to roughly £30/head but if you strip out the booze then you can get away with £25/head including tea and service.

I'd also like to return here for dinner to explore the a la carte menu, which is predominantly Shanghainese in contrast to the largely Cantonese dim sum selection.

PS: Special thanks to The Insatiable Eater for introducing me to this fine restaurant.
Posted by Mr Noodles at Wednesday, March 20, 2013