I'm such a slack blogger these days. There was a time I would've knocked out a series of posts on my recent trip to Bangalore, but I really can't be arsed so you'll have to make do with just one. It's not that I ate badly, far from it, but the sheer variety left me bewildered on how to make sense of it all. For instance, I ate at places described as North Indian, South Indian, Veg, Non-veg, Punjab, Parsi, Gujarati, Rajasthani, Coastal, Railway-style, Multi-cuisine and Chinese (no, really). This scattergun approach manifested itself in one place that had minestrone and burgers on its otherwise North Indian menu. This isn't apparently unusual, as restaurateurs widen the net to pull in Bangalore's bright young things, many of who hail from other parts of India.

Of the food I tried (and I tried a lot) my favourite was South Indian cuisine. In particular, I adored breakfast dishes such as a bowl of sambar ready to be dipped with idli and vada, and of course the classic masala dosa. It wasn't just breakfast, I loved mopping up all kinds of curry with various breads, pancakes and stringhoppers for lunch and dinner, too. One place that does this style of food well is Karavalli (round the back of the Gateway Hotel). Don't be put off by the fact it's a hotel restaurant, as it manages to maintain a discrete identity. Let the waiters guide you on ordering, but make sure you order loads of appam, neer dosa and super-flaky Malabar paratha. 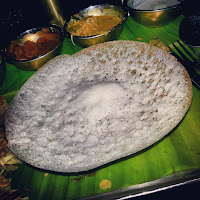 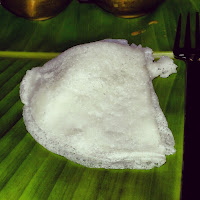 I would love to tell you more about the curries I ate but I often didn't get to see a menu, and when I asked, the reply was 'chicken', 'fish', 'veg' etc. Having said that, I didn't have much of a clue of what I was eating when I did order at Rajdhani. This restaurant served vegetarian thali from Rajasthan and Gujarat. Yes, that's right I am recommending a fully vegetarian restaurant in my blog. To be honest, the fact it didn't serve booze irked me more than the lack of meat and fish.

I ordered the Maharaja set thali, which consisted of countless dishes served up by blokes who buzzed around the tables with fresh pots of various curries, dhals and all kinds of stuff. A man with freshly baked breads and another guy with rice and khichuri (rice-dhal combo) did the rounds, too. Looking back, bread guy along with potato curry man came round our table most frequently. From start to finish, I enjoyed it all. 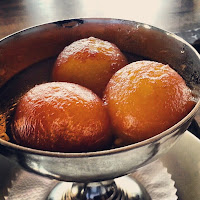 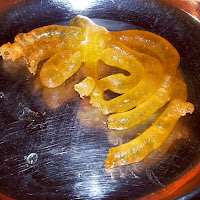 I usually found myself too full to sample Indian sweets, but on the occasions that I did, I found them too sweet. That's a shame, as I really like the idea of gulab jamun and jalebi. Quite possibly the strangest thing I ate was the local Chinese food. I wasn't a big fan of the couple of places I went to, as they were caught between the two stools of casual Indo-Chinese food and the real deal. Mind you, there was one dish I liked: chicken lollipops (aka Drums of Heaven in the posher places I was taken to). These spicy, tangy chicken wings were very moreish. I'm pretty sure I've barely scratched the surface of the food in Bangalore, and I wish I had the chance to explore a few more places freestyle. Having said that, I was fed well and my love of Indian food has been rekindled.
Posted by Mr Noodles at Thursday, March 14, 2013