I was going to start this review with a double-entendre laden paragraph about how it's better to book in advance when visiting Amsterdam, as otherwise you may end up with something cheap and nasty at the end of the night. I'll spare you the cheap schoolboy innuendo, but the point certainly holds when it comes to eating out in the Dutch capital, which is why we ended up in a rather classy Indonesian restaurant called Tempo Doeloe. 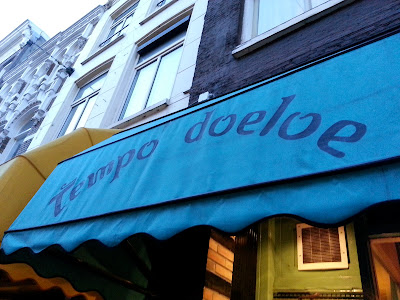 In Bahasa Indonesian, tempo doeloe means 'old days'; the name is very apt, as I was meeting old friends for a rare get-together. In contrast to the irksome no-bookings trend sweeping London, this restaurant is open only to those that make a reservation. This rule is strictly enforced; to the extent that you have to ring the doorbell to be let in.

When eating Indonesian food in the Netherlands, there is only really one option: rijsttafel. This concept of eating a giant spread of small dishes, from across the Indonesian archipelago, accompanied with rice was popularised by Dutch colonists. Nowadays, rijsttafel isn't that common in Indonesia, but it is very widespread in the Netherlands, where it holds a place in Dutch society analogous to that of Indian food in the UK.

As we wanted to try as many dishes as possible, we decided to order the premier rice-table: Rijsttafel Istemewa (€37.50/head, min. 2 persons) – a magnificent feast comprising 25 different dishes. I won't list them all but I've linked to the menu if you want to check it out. I'm not going to pretend that the menu will be to all tastes, but when someone as fastidious as my mate, Mr Fussy, can enjoy around 85-90% of the dishes then it'd be fair to say there's something for everyone.

The food was brought out in a nice stagger, starting with pork satay served with a peanut sauce that had a nice spicy kick, along with some side dishes including kroepoek (spicy prawn crackers) and the famous gado-gado salad.

This was followed by a batch of six milder dishes, then six medium dishes, and finally, six spicier dishes. These were served with bowls of white rice and yellow rice, which were topped-up on request. Of the milder and medium dishes, my favourite was, surprisingly, a vegetarian dish: sambel goreng tempeh. I really enjoyed this fried soy-cake, which had a subtle nutty flavour that went well with the medium spicy sauce.

Onto the spicier dishes, and one in particular left a profound impact: daging rendang. From the outset, we were warned about the potent nature of this dish. Firstly, the menu stated that the chef would show no mercy with respect to the chilli-heat levels. Our waitress then asked us if we were OK with the spiciness of the beef rendang. Mistaking this question as a direct challenge to our masculinity, we said yes.

With hindsight, we were a touch blasé about the rendang. After all, we'd eaten this classic dish before, and didn't reckon it could be that hot. Big mistake; upon tasting it, my brow turned sweaty, my face red, and on one of the few occasions in my life, I was left speechless. My coping mechanism was to try to temper the heat by sprinkling some fried coconut on top. That tactic proved as futile as using chopsticks to eat soup.

Equally futile was The Black Widower's attempt to douse the flames by eating pak choi. That would have been a good tactic, but for the fact that the vegetables were themselves a touch spicy. Mr Frosty wisely steered clear of the killer rendang as did Mr Fussy, if I'm not mistaken. (It turns out I was mistaken, as Mr Fussy did sample some rendang. I guess I was temporarily blinded by the spice. Apologies!)

At this point, we were facing ignominy and shame; fancy giving it the big one about being able to handle the spiciness then not being able to finish the dish off. Mercifully, The Italian Shetland Pony rode to the rescue by hoovering up the not inconsiderable remains of the rendang (he even polished off the fiery chilli garnish). And with that, our reputation remained intact, and more importantly, my old friend gained redemption for a shameful incident involving roast duck in Manchester's Chinatown.

To be honest, the food didn't have to be that good for us to have a good time; it's sometimes enough to be in good company. But the food was good, very good. As was the service, and the ambience. It helped that the restaurant was intimate and buzzing with a room full of satisfied diners. It's also great value; with a couple of beers each and a tip, the bill came to €250 between the five of us. I highly recommend Tempo Doeloe, but remember to book in advance or you might end up be eating at FEBO!

PS: The photos have been enhanced, as the dining room was intimately lit and I was reluctant to use flash.
Posted by Mr Noodles at Thursday, October 11, 2012