By chance, and by choice, I ended up at three Beijing restaurants regularly mentioned in guidebooks and the interweb: Xiao Wang's Home Restaurant (小王府), Shun Yi Fu (顺一府) and Noodle Bar (面吧).

Xiao Wang's Home Restaurant 小王府
I am someone whose foodie mindset has been conditioned by living in the UK, where mediocre restaurant chains, peddling all things to all people, blight the landscape. In particular, tourist areas are badly afflicted by chain-blight; London's South Bank is a prime example. So one might assume that I would have issues with Xiao Wang's. After all, it has a pan-Chinese 'Greatest Hits' menu, is a mini-chain, and the branch I visited is located in Ritan Park, a popular Beijing tourist spot. 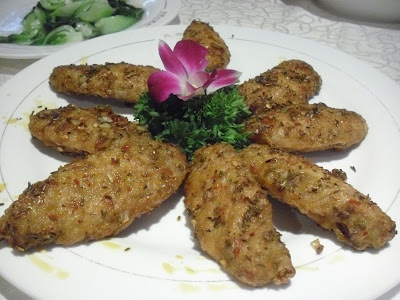 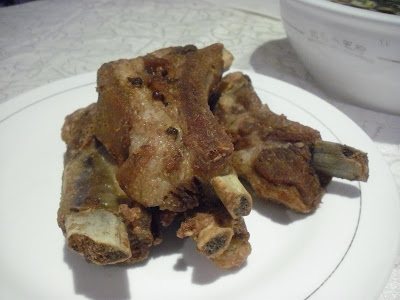 I needn't have worried. Dishes like the fried hot spicy chicken wings in Xinjiang-style (孜然鸡翅), which were liberally laced with not only chilli but also cumin, and deep-fried pork ribs with pepper salt (飘香排骨) really hit the spot. And for those of you who like to match booze to food, I recommend ice-cold lager in the form of the local Yanjing Beer (燕京啤酒). 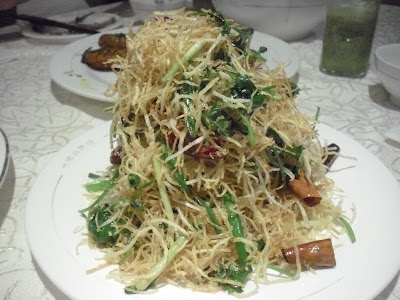 Another beer-friendly dish was an amazing giant mountain of fried potato slivers laced with spring onion, coriander & dried chillies. I know this dish is more than a bit trashy, but by god, these crispy spicy slivers of spud were SO addictive. 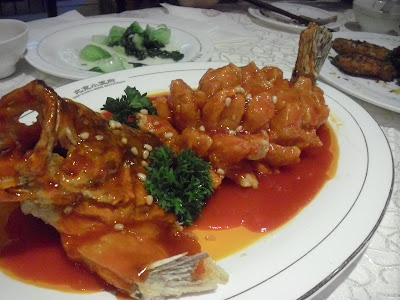 The squirrel-shaped Mandarin fish (松鼠桂鱼), so named because it's carved and cut up to look like a squirrel, was another winner. Don't be put off by the radioactive sweet & sour sauce; it went really well with the perfectly deep-fried Mandarin fish and pine nuts. Note to food geeks, although often thought of as a Shanghai speciality, it actually originates from Suzhou. 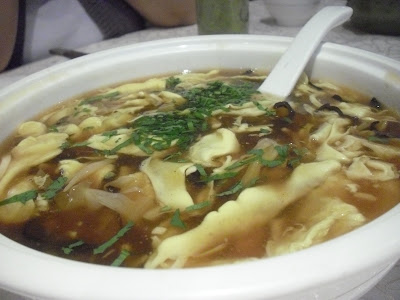 The classic hot & sour soup (酸辣汤) from Shandong province is found on Chinese menus worldwide, but like many famous dishes, it is often abused. Not at Xiao Wang's, where the use of top quality vinegar gave it a depth so often missing from versions that use the cheap stuff. And nor did they skimp on the other ingredients, especially the egg!

I know this meal appears to be a bit unbalanced with a, quite literally, unhealthy reliance on deep-fried treats. However, we did balance it out by ordering Cantonese-style pak choi with garlic, Sichuan cucumber salad and fresh wai-san in honey with cassia flower (the photo doesn't really do it any justice). 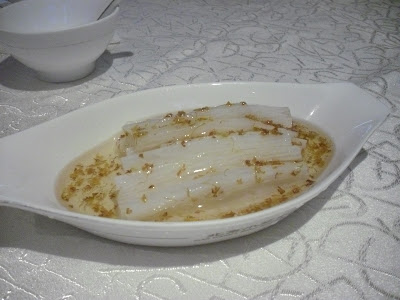 Wai-san (淮山) aka mountain yam is one of those Chinese ingredients that doesn't really taste of anything, but is highly valued due to its perceived health benefits. More commonly used in dried form in slow-cooked Cantonese soups; this was the first time I had tried it fresh. I really liked this dish with the slightly crunchy yam nicely complemented by the sweet honey. And as it's so healthy, it meant that I could bag that extra chicken wing without feeling guilty!

I like Xiao Wang's, and it shows that with enough expertise, a geographically diverse menu needn't mean compromises in the quality of the food. Combined with a comfortable European-style dining room and efficient service, this restaurant is an excellent option for those occasions when one is paralysed by the myriad choices found in Beijing. 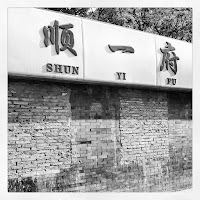 Dinner at Xiao Wang's was my last meal with my Beijing colleagues, a fine bunch who looked after me really well. However, my food exploits were far from over, as I had a couple of days to myself armed with a shortlist of Beijing eateries. First on my list was Shun Yi Fu; I was really looking forward to eating at this dumpling joint after a previous visit three years ago. So you can't even begin to imagine how pissed off I was when I saw that the restaurant had been bricked up.

Mercifully, there was another branch about five minutes walk away, and once I found it, I ordered a steamer of pork & fennel dumplings (猪肉茴香蒸饺). There wasn't anything wrong with these but they could have done with having a more intense fennel flavour. 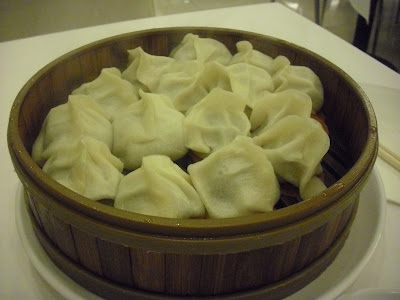 While I'm sure some of the other varieties of dumplings would have been more to my taste, there was something else that was wrong. The location. This newer branch is located in a shopping mall, and is totally devoid of the charm and character that made the original Shun Yi Fu so great. And while I wouldn't discount visiting this restaurant again, I won't go out of my way to do so.

Noodle Bar (面吧)
The simply named Noodle Bar is located in an upscale development called 1949 - The Hidden City that is also home to an art gallery, a wine bar, a cocktail bar, a private club, and two other restaurants including the highly rated Duck de Chine. 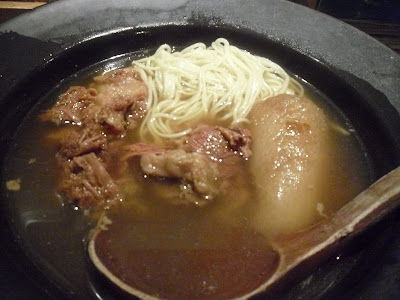 Noodle Bar is a tiny joint with just a dozen or so seats at a counter surrounding an open kitchen. Given the small scale of operations, the menu is brief with a few small plates supplementing the soup noodle selection. For the latter, the choice is beef brisket, tendon, tripe, a combination of all three, or wild mushroom (for the veggies) with a further choice of thin or thick noodles. I chose the beef brisket with thin noodles and from the selection of small plates I dodged the salads and went with spicy chicken wings. 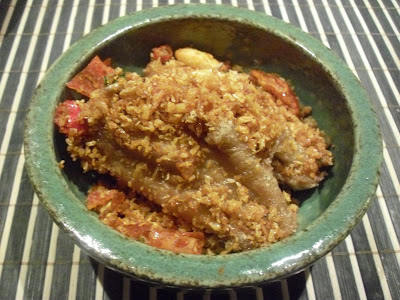 Whilst the al dente hand-pulled noodles that I saw made before my very eyes were excellent, the rest of the combo was a big letdown. In particular, the broth lacked depth with little evidence of star anise, cinnamon or any of the other spices usually found in beef noodle soup. I had to give it a big kick-start from the pots of chilli oil and roasted garlic on the side along with the crispy bits from the spicy chicken wings. I also got the hump at how little beef there was, especially as there was a massive chunk of (unadvertised) mooli. I may have caught it on a bad day, but I find little to recommend Noodle Bar.