I wasn't going to write about the food I ate in Tuscany way back in April and May this year. I was on holiday and not really on full blog mode. But it's hard to totally switch off, so in this post I'm going to imagine my fantasy Tuscan meal. This is much more fun than me prattling on about the restaurants I went to. And besides, it's far easier, too (I did tell you I wasn't on full blog mode). 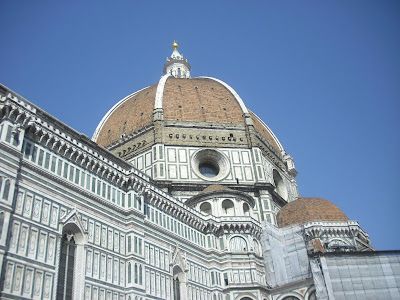 Italian menus are very tempting with their selection of antipasti, zuppe, primi, secondi, contorni and dolce. However, I reined in my natural tendencies to have it all, and just plumped for two courses (most of the time). But for my fantasy meal, I'm going for a full four-course affair washed down with a few glasses of Brunello di Montalcino. 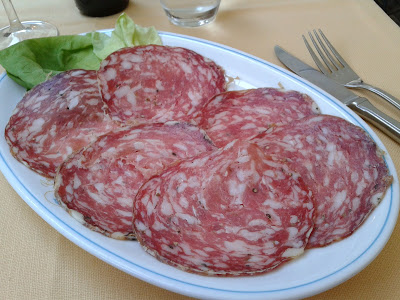 The easiest choice out of my four courses is the antipasti in the form of finocchiona, salami made with fennel seeds. Fennel is used a lot in Tuscan cuisine, and I love the aniseedy zip it lends to the sausage.

Onto the next course, and it's a choice of soup, risotto or pasta for primi. This is a no-brainer. After all, I am Mr Noodles, so it has to be pasta (in the form of noodles, mind, not shapes). Besides, I've never really liked risotto that much, and nor did I really take to bread-thickened local soups such as ribollita and papa de pomodoro during my stay in Tuscany. 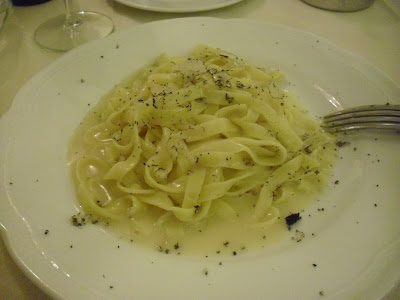 But choosing a pasta course is hard work, as there are loads of great options. After much deliberation, I'm going for tagliolini al tartufo. There are better pasta dishes out there, but I think this dish of tagliolini in a rich buttery sauce topped with truffle shavings works best with the rest of my meal.

The thing is dishes like papardelle al cinghale, a Tuscan classic made with wild boar sauce, is a bit much in the context of a four-course meal. I also thought long and hard about going for tagliolini al sugo d'anatra e finocchieto selvetico, a dish that bizarrely had an almost Chinese flavour with its combination of eggy noodles in a boozy duck and wild fennel sauce. This was probably my favourite pasta dish from my trip, but I don't want to double-up on fennel, having started with the finocchiona. 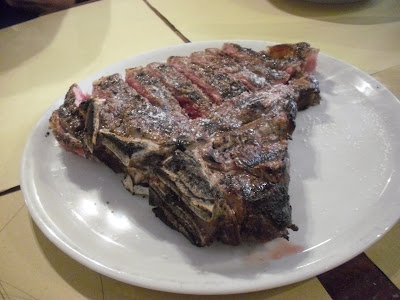 Onto the secondi, and there's only really one way to go: bistecca alla Fiorentina. What's not to love about a T-bone steak, usually upwards of 1kg in weight, cooked rare? The only other contender was also from the grill: lombatina di vitella alla griglia. However, when it comes to meat top trumps, T-bone steak beats veal chop. 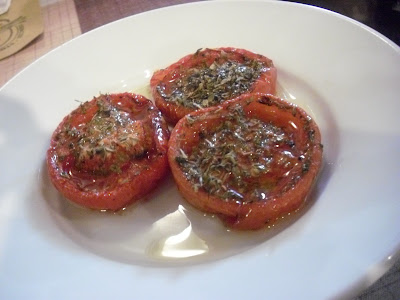 To accompany my steak, I'm going for a side of roasted tomatoes with basil (remember five-a-day!). I've also got my eye on some roast potatoes with rosemary but I have to say no to leave room for dolci. 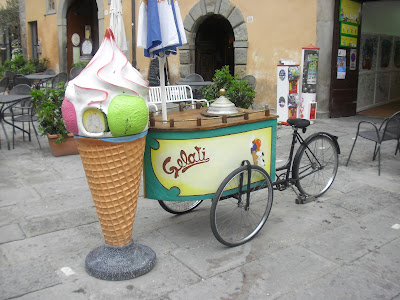 At this point in my imaginary meal, I've ordered an espresso and asked for the bill. I know you're thinking I've wussed out of dessert, but I haven't. I just need some air and a little walk before pitching up at a gelateria, where I order a scoop of pistachio ice cream and a scoop of something that's been recommended. Oh yes, this is the life; this is what the Italians call la dolce vita. It's just a shame that it seems such a long time ago!
Posted by Mr Noodles at Wednesday, July 18, 2012