Is the blingification of ethnic restaurants in Britain, a good or bad thing? Instinctively, I'm wary of trendy design-driven restaurants. Phrases like: 'style over substance', 'superficial and shallow' and 'should've spent the money on the kitchen', all spring to mind when I come across such places. But am I too hard on these trendy joints? And why? 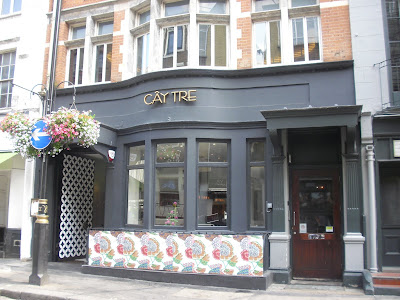 To answer these questions, let's go back in time to the late 1980's. Way back then, the best Chinese restaurant in Manchester, quite possibly Britain, was reckoned to be Yang Sing. My family were regulars, and I remember enjoying many a fine dim sum session there, but then we stopped going. I'm not sure why, but I suspect that it was due to Pa Noodles feeling aggrieved that he was paying extra for interior design rather than for better food.

I've not been to Yang Sing in years, but from what I see on their website, it is spectacularly bling and spectacularly expensive. Suffice to say, one is more likely to see a footballer or soap star eating there than extended Chinese families. But is this a problem? It's a free country, and if I don't like it then I can lump it. Just quite what this has to do with Cây Tre, I will get to in a moment, I promise. 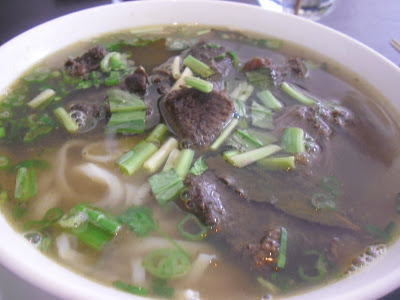 Fast forward twenty or so years, and I have my own run-in with blingification, at Viet Grill. This stylish Shoreditch restaurant is reckoned to be one of London's finest Vietnamese eateries, but I had a deeply unsatisfying time there. And try as hard as I might, I couldn't help but feel, rightly or wrongly, that the deficiencies in the kitchen were in someway connected to the uber-trendy interior design and flashy cocktail bar. So I can't say I was too excited when the restaurant group that operates Viet Grill and its sister restaurant, Cây Tre, opened a Soho branch of the latter. 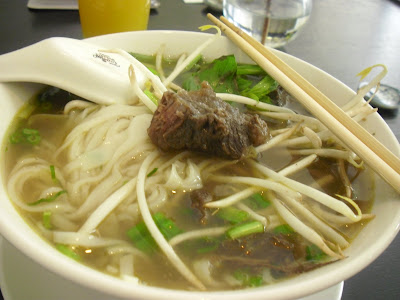 But then I saw a very intriguing bowl of noodles on the menu: ox cheek au vin pho (phở sốt vang). Any negative thoughts of blingification were put to one side, and I popped along to Cây Tre for a spot of lunch. First impressions weren't great, as I thought the bowl was a bit on the small side for £9.50.

But appearances can be deceptive, as it was surprisingly filling with loads of ox cheeks – at least six, maybe seven chunky pieces. These cheeks were top class with tender strands of meat, but whilst perfectly braised, I thought the seasoning was a bit too subtle. That said, I'm using the citrusy anise notes of Cantonese braised beef brisket as a reference point, and this comparison may not be entirely fair. 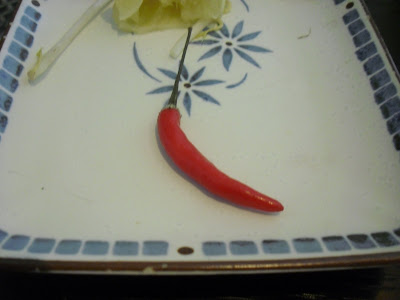 By contrast, the broth had a great depth of flavour, and I wish there was more of it. The rice noodles were smooth and slippery, and I could have no complaints about the other toppings. The one thing that did perplex me was the whole chilli on the side. Not that the soup needed extra heat, but were you really expected to chop up the chilli yourself? Anyway, save for my blogger nitpicking, this was a mighty fine bowl of noodles, and one of the best that I've sampled in London in a long while.

Update 2 Nov 2011 – the ox cheek au vin pho has mutated into a strange almost stew like dish. Gone is the side plate of beansprouts, herbs and lime. Instead, the herbs are already in the bowl but the beansprouts have been replaced by more homely accompaniments in the form of potato and carrot. It's like the chef was inspired to tinker with this dish following a trip to Ireland. It's still tasty, but I think I will revert to more orthodox noodles on my next visit to Cây Tre.

Update 3 Nov 2011 In all fairness to Cây Tre, following a twitter exchange, they announced that they were tweaking the ox cheek au vin pho once more. The offending carrot and potato will be replaced by Thai basil and saw-tooth coriander respectively. I don't doubt their honesty, but do let me know if any rogue ingredients turn up in this, or any other, dish. 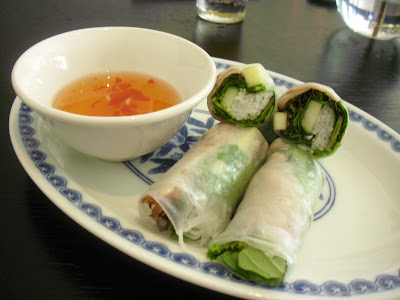 I also had some summer rolls w/steamed pork (gỏi cuốn lớn) to start. These were freshly made, and properly served at room temperature. Whilst tasty, I thought they were poor value at £5. And overall the one thing that did rankle was the price. With a drink and service, there was very little change from £20. It was at this point I also thought it a bit cheeky that for all their flashy décor, Cây Tre use disposable chopsticks.

So going back to my original question – is the blingification of ethnic restaurants, good or bad? Well, I've come to the conclusion that it's neither. It really isn't that important. Yes, there are some bling places that take the piss, but there are plenty that don't. Without really giving their menu a proper going over, I'm not sure which category Cây Tre falls into. Mind you, if the rest of the menu is as good as the ox cheek au vin pho then I'm willing to give this temple of bling the benefit of the doubt.