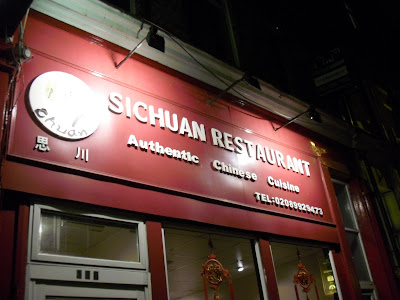 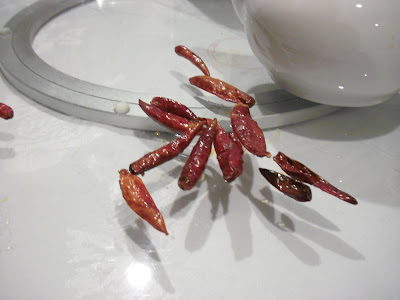 Recently, Su-Lin mused about 'food blogger-dominoes' in her blog, Tamarind and Thyme. More often than not the dominoes tumble down so much so that you get sick and tired reading about the same old places. However, sometimes only a couple of dominoes fall and that’s certainly the case when it comes to the imaginatively named Sichuan Restaurant in Acton.

I mean you would've thought more bloggers would've beaten down a door to this place following the three four glowing reviews on Tamarind and Thyme and the two gushing write-up's by Delightful Eggtarts. The only other slight interweb murmur was on the Randomness Guide to London but otherwise, there’s a deafening silence that I can only attribute to its Zone 3 location.

On rolling up to Sichuan Restaurant, there's little indication of its true potential. After all, it looks pretty humdrum and its menu consists mainly of Anglo-Chinese crowd pleasers like sesame prawn toast, crispy aromatic duck, and chicken & cashew nuts. There is page after page of this stuff on the main menu and it's only after 120 or so dishes before we come across the Chef's Specials. There's also a separate menu card with more Sichuan goodies on it, which has been translated into English.

As it was her review that lured me here, I was delighted that Su-Lin accepted my invitation to dine here. I was looking to her to unlock the secrets of the menu as this place is her local. Also joining us was Bellaphon and some peeps from the Randomness Guide to London for a follow up visit. Our party of seven meant that we could give the menu, a good going over. 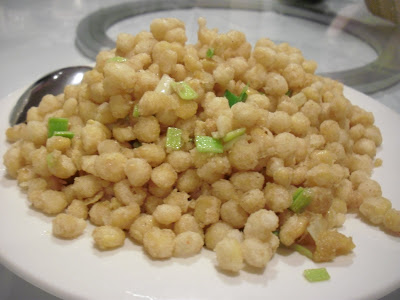 One dish I would never have thought of ordering was corn w/salted egg yolk (£6.80) but Su-Lin insisted this was a must-order (judging by her latest post, I think she really likes it!). This dish was sensational and who'd have thought corn would be the star dish of the evening? Although fried, it wasn't greasy and the salted egg yolk gave it an addictive quality. I meant to ask the management about the origins of this dish but I got bogged down talking about..... 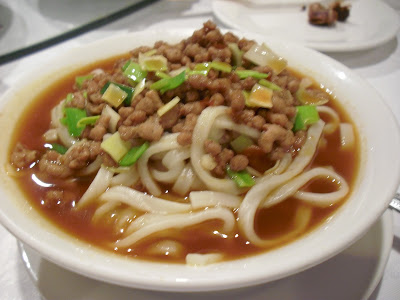 ...........the dan dan noodles (£5.80/bowl) which were also excellent. I loved the way the spicy sauce clung onto these noodles of exceptional quality. The owner proudly told me that the noodles used were hand pulled Shandong la-mian. Don't hold me to it though, as my Mandarin is sub-schoolboy. 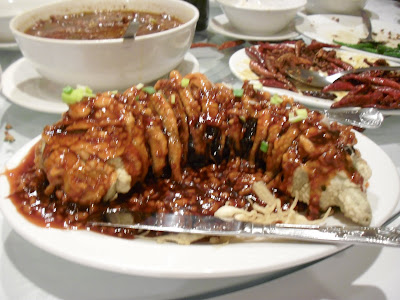 Although not described as such, the sweet & sour eggplant dragon (£9.80) can be considered Sichuan Restaurant's signature dish. Technically, there's nothing wrong with this dish but I think it looks better than it tastes. I guess that's because I remain unconvinced that sweet & sour and aubergine go well together. Kake and some of the other Randomness peeps also thought this dish was a bit too sweet. 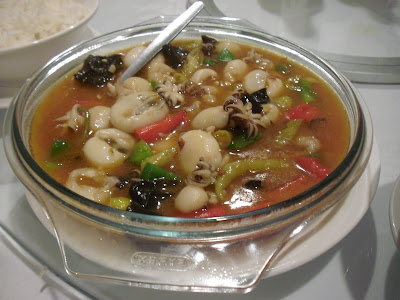 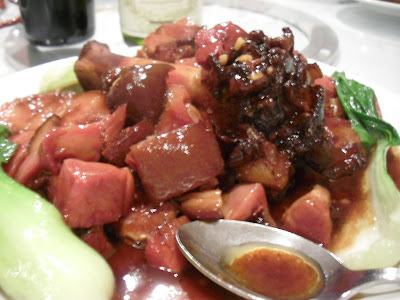 Given the size of our party, we chose a few dishes that we might not normally go for. Of these, I liked the baby cuttlefish w/spicy sauce (£12.80), which pretty much did what it said on the tin. I was less impressed with the Dongpo pork leg (£9.80) – a 'red cooked' dish originally from East China, as it should have been more tender. Mind you, I'm not totally surprised as slow cooked dishes like these often disappoint in restaurants. The sour & spicy potato thread (£6.80) was well seasoned and had a nice crunch but it got a bit boring after a while. 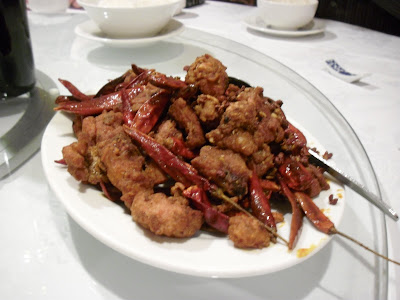 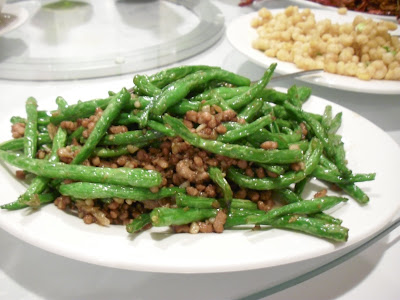 You didn’t think that was it? We also checked out some old favourites such as la zi ji known as chicken with chillies (£8.80) here. The chicken bits were larger than usual and were authentically on the bone. Tossed with generous amounts of dried chillies and Sichuan peppercorns, this had real fire and is one of the better versions, I've had in London. I particularly enjoyed the bits of fried skin! I also liked the si ji dou or stir fried green beans (£6.50), which were generously laced with minced pork and preserved veg. That said Kake thought the beans were on the mature side.
Less successful was the shui zhu niu rou or spicy beef in a pot w/chillies (£8.80), which inexplicably lacked heat. It was a bit disappointing compared to the rest of the dinner and better versions can be found elsewhere. Considering we ordered ten different dishes, I could forgive the one duff dish of fried minced pork w/vermicelli (£6.50) or ants climbing up a tree. It was far too salty as too much soy had been added. Su-Lin reckons thinks this might be a one-off as she didn't remember it being as salty on previous visits.
Service veered from the efficient to the eccentric. When the management were overseeing things, there were no problems but when the waitress was serving us, it was a bit 'Fawlty Towers'. In particular, she seemed over keen to clear the table when there wasn’t a real need. The poor girl nearly started a riot when she made a move for the corn as there were still a few kernels left. Mind you she probably thought we were a table of nutjobs as we took multiple photos of our dinner.

The bill came to a scarcely believable £154 which equates to £22/head including rice, tea, three bottles of wine and 10% service. Take out the booze and our dinner would've cost around £15/head – amazing value for food of this quality.

Verdict: I'll be returning to Sichuan Restaurant for its inventive and imaginative cooking. I don't say this lightly but I think it ranks alongside Chilli Cool and Empress of Sichuan in the top flight of Sichuan restaurants in London.

Other Stuff: They also serve hotpot (steamboat), which Su-Lin reckons is superior to that served by Chinatown hotpot specialist, Little Lamb.