Although I was born in the northwest of England, my culinary upbringing was strictly Chinese. I didn't really have much choice. In common with many immigrants, my folks fought off homesickness through rustling up the dishes they grew up with. The food they cooked was typical of their hometown of Canton (now known as Guangzhou) as well as Hong Kong, where they lived before coming to the UK.

In particular, Sunday lunch was always a very special meal. My mum would get up at an ungodly hour to put a slow-cooked soup, made with pork bones and mysterious dried herbs, on the boil. My dad was in charge of the roast. Not beef or lamb, but a slab of pork belly or maybe a whole duck roasted in the traditional Cantonese way. Sometimes, there would be a steamed fish, other times, some stir-fried seafood. And then there were vegetables, which my mum would ALWAYS make me eat. I didn't properly appreciate it when I was younger, but I am forever grateful to my parents for instilling in me a deep love of my native cuisine. 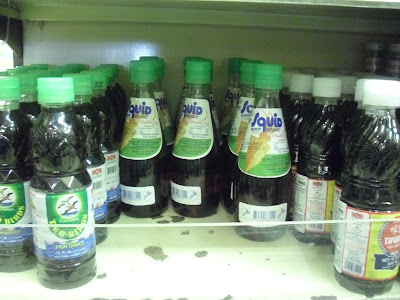 So you can imagine my shock and horror when I discovered my folks have never ever used fish sauce when cooking. This revelation got me thinking what other liberties they were taking in the kitchen? After all, according to no less an authority than Gok Wan, fish sauce is a Chinese store cupboard staple. And it must be true because this rather special TV chef would liberally slap shedloads of crappy Squid Brand fish sauce into most of the dishes he rustled up on his comedy cookery show, Gok Cooks Chinese.

I am, of course, taking the piss. Don't get me wrong, I like fish sauce. Without it, Thai and Vietnamese food wouldn't be the same. However, when it comes to Chinese food, fish sauce isn't really that common. In fact, it is traditionally only used and manufactured in a small corner of southeast China by the local Chiu Chow (Teochew) and Hokkien communities. Even then I'm not so sure how common it is as a Chinese condiment, as the shelves of the shops I visited in London's Chinatown were full of fish sauce from Thailand or Vietnam with nary a bottle of Chinese-branded fish sauce to be seen.

So why is Gok Wan perpetuating the lie that fish sauce is essential for Chinese cooking? My theory is that fish sauce is being used as a shortcut to gain that elusive xian (鮮) or umami taste. The alternatives would be either to do it the old fashioned way, or to use the much-maligned MSG. (I don't really want to go into the MSG debate right now, but scientific evidence debunks the mass of hypocritical borderline-racist bullshit written about this subject.)

Just to be clear, I'm not saying fish sauce shouldn't be used in Chinese food outside of those traditional Chiu Chow/Hokkien dishes in which it already features. What I resent is that, along with a load of other misconceptions, fish sauce is portrayed as a traditional Chinese staple on Gok Cooks Chinese. It would have been more honest if Gok said that he was using fish sauce to give the recipe a twist, or as a bit of cheat. But no, he gave birth to a lie. It's one I want to stamp out.
Posted by Mr Noodles at Wednesday, August 01, 2012