'Chineser points' is a kind of game played by people, like myself, of Chinese-descent. There are no rules, but points are awarded or deducted for behaviour worthy or unworthy of being Chinese. To be honest, I'm not a great Chineser; I probably have a net points tally in the negative. However, as I get older I reckon I'm becoming better at accruing Chineser points. 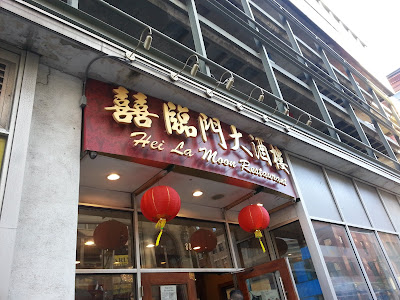 Take, for example, my recent visit to Boston, where I bagged a monster haul of points by visiting one of the most Chinese restaurants I have ever come across. Hei La Moon 囍臨門 might be located in New England, but it is very much Old China. This dai jau lau 大酒樓 – the kind of place that serves multi-course banquets by night, and dim sum by day – ticks all the Chineser-boxes (and more) with its gaudy red and gold interior; trolley-service dim sum; fish tanks at the entrance; multi-generation Chinese clientele and, last but not least, a super-auspicious address at 88 Beach St.

However, just because a restaurant looks the part doesn't necessarily mean the food delivers. At Hei La Moon, it does. Highlights included ginormous wu gok 芋角 (these taro croquettes were so big that the trolley auntie cut them in half with scissors) and steamed chive dumplings (gow choi gau 韭菜餃) chock full of herby prawn goodness.

The other dishes were pretty decent, too; classics (including cha siu bao 叉燒飽, siu mai 燒賣 and cheung fun 腸粉) were generous of portion and full of flavour. The only blot on the landscape was the har gau 蝦餃 that suffered from thick pastry syndrome, but this was partially redeemed by the tasty prawn filling that included slithers of bamboo shoots.

Sadly, as there were only two of us, we merely scratched the surface of the dim sum selection at Hei La Moon. For instance, we missed out on the delights from the dessert trolley, congee trolley, and a trolley where the auntie finished off pan-frying dishes such as loh bak gao (turnip cake 蘿蔔糕). At US$35 for eight dishes, tea and a tip, our meal was amazing value. In truth, we over-ordered and we packed the leftovers in one of those iconic American takeaway containers. 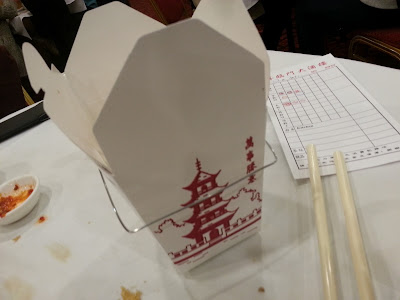 Service was above par; the trolley aunties were friendly and efficient, and I was impressed by the manager who sent a waiter to fetch some dumplings from a trolley stranded at the other end of the dining room. But the real draw of this restaurant is its atmosphere; there's something particularly joyful about trolley-service dim sum in a dining room full of chattering punters. I adore restaurants like Hei La Moon, and while it may be a bit rough around the edges, its enduring old school charm is a winner.

One last thing, in common with virtually all restaurants that serve quality dim sum, Hei La Moon gets really busy on a Sunday. As it serves dim sum from 8.30am to 3.00pm, my advice is to get there early. We went just before 11am, and the dining room on the lower level, where we were seated, was already nearly full. By the time we left, around an hour later, both floors of the restaurant were full and there was a queue outside.

PS: Happy as I was at bagging a bonus haul of Chineser points, I felt a bit bad having deprived my colleague (of Italian ancestry) of crucial punti italiani. The thing is there could only be one first proper meal in Boston, and I coerced gently persuaded him into going for Sunday brunch in Chinatown rather than at one of the numerous trattoria in the city's North End.
Posted by Mr Noodles at Wednesday, January 30, 2013