The neighbouring northern Chinese provinces of Shanxi (山西) and Shaanxi (陝西) are often confused with one another. Not only do they sound alike but their respective cuisines also share many similarities. In particular, both provinces are famous for their noodles, and to a lesser extent, their bread. I know that this is a bit of a generalisation, but as people in China can't access my blog (Blogger is banned) it's one I'm going to try and get away with! 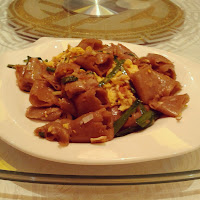 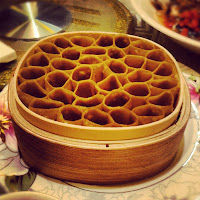 Beijing has many Shanxi restaurants, and I was taken to one called Datanghong (大唐红) where noodles are the main draw. Indeed, the noodle kitchen is on open view by the entrance of the restaurant. There are many different kinds of Shanxi noodles but arguably the most famous are honeycomb noodles (youmian kao laolao 莜面栲栳栳). Made from a grain indigenous to the province called naked oat, these noodles are intricately arranged in a honeycomb-shape in a bamboo steamer before being cooked. Simply served with a chilli oil-vinegar dip, they were really addictive.

As well as being eaten straight from the steamer, honeycomb noodles are also used in other dishes such as stir-fried honeycomb noodles with egg. Wok frying gave the noodles a slight char, and the texture, if not the flavour, was reminiscent of dry-fried ho fun noodles. It's a tough call to say whether these were better than the standard steamed version.

Other noodles I tried included cat's ears (mao er duo 猫耳朵) and knife-cut noodles (dao xiao mian 刀削面). These were served with sauces on the side such as egg & tomato, which are then stirred into the noodles. I could've eaten these all day, but for the fact that there was loads of other dishes to check out. 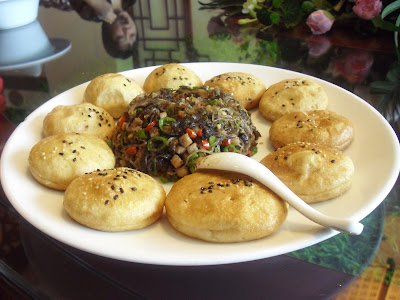 Just as impressive as the noodles were the sesame buns served with glass noodles, chillies and other bits and bobs. It was great fun making noodle sandwiches with the soft, spicy filling going really well with the buns that were slightly crispy on the outside.

I would have liked to write more about this restaurant, but alas I was disorientated by jetlag and the unfamiliarity of the food when I ate there. That said, between my camera and Instagram, I can tell you that I enjoyed tucking into Shanxi-style crispy duck, roast mutton, mixed mushrooms in a mini-wok, and some psychedelic multi-coloured buns amongst other treats. I really enjoyed eating at Datanghong, and I hope this first experience of Shanxi cuisine won't be my last. 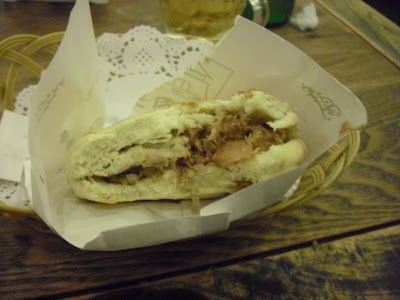 Given the ubiquity of roujiamo (肉夹馍) in Beijing, one might assume that it's a local speciality, but in fact these sandwiches (sometimes nicknamed Chinese burgers) originate from Shaanxi province. The ones at Qin Tang Fu (秦唐府) were damn tasty with strands of moist, slowly braised pork seasoned with five-spice encased in a crispy unleavened bun. These were so popular that it seemed compulsory for every diner to order one. I think these would go down a storm in the UK. 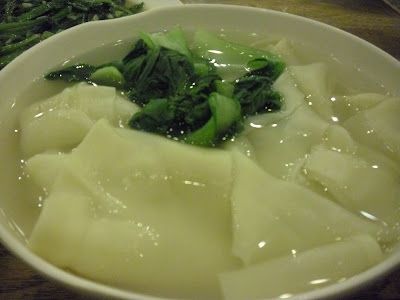 There's also a wide selection of noodles, and I chose a dish that went by the English name of noodles with garlic sauce. This name didn't really do justice to what was one of the best noodle dishes I've eaten in a long time. In one bowl came 'belt' noodles (think pappardelle, but even broader) in an intentionally bland soup with some greens. In a smaller bowl came a quite stunning spicy garlic sauce laced with sesame, bits of tomato, egg, wood-ear fungus and spring onion. 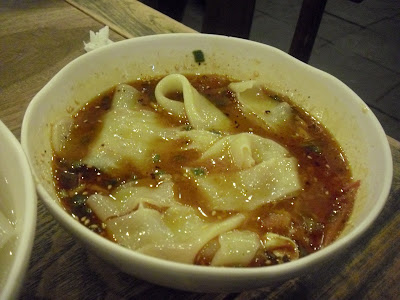 To eat this dish properly, the noodles are transferred into the bowl of sauce, and given a good old mix to make sure that they are all coated. With hindsight, I shouldn't have supersized my noodles, but when it only cost the equivalent of 20p to go large, the temptation was too great. Be warned, the portions very are generous and filling at this restaurant, and I barely made any inroads into my order of stir-fried greens.

I would love to revisit Qin Tang Fu, as there are loads of interesting Shaanxi dishes that I'd like to try. For more detailed reviews of this restaurant, please check out Rice & Pickle and Hungry Female (thanks for the tip, Shu).

There are four branches of Qin Tang Fu in Beijing, and the address below is of the one I visited: