New Malden is home to Europe's largest Korean community, and I admit to feeling slightly ashamed that I'm largely ignorant of its culinary delights. So when G suggested that I check out Sorabol, his favourite Korean restaurant in New Malden, I was more than happy to join him and Mr Pak Choi. 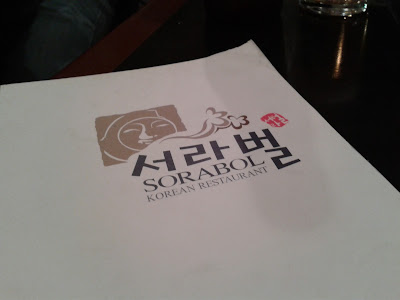 I liked this restaurant from the moment I walked through the door. There was more than a sprinkling of Koreans amongst the clientele, and it had a homely feel about it. Or to put it another way, it ticked all my foodie snob boxes!

To kick off the meal, we were served complimentary nibbles of beansprout salad, cold mashed potatoes, and Korean black beans to go with our beers. This was a nice touch, although I can't say I was a big fan of the cold mashed potatoes (apparently it is traditionally Korean). 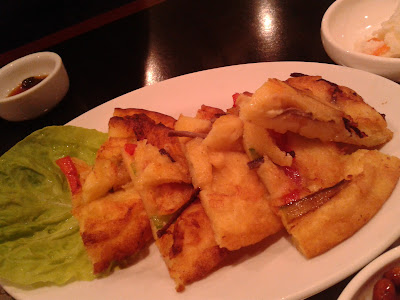 We also ordered some proper starters in the form of kimchi (£2.00), fried dumplings (£6.50/8 pcs), and mung bean soufflé pancake (£7.00). I've had better Korean pancakes (pajeon) but Sorabol's effort was decent enough. My favourite, however, were the dumplings (similar to Beijing-style dumplings) with their juicy pork and spring onion filling. 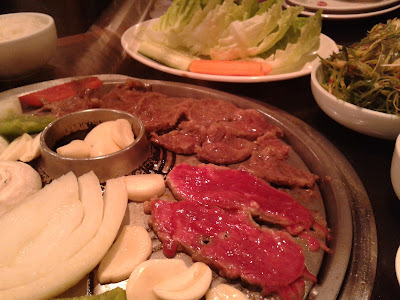 For the main event of Korean BBQ, we ordered anchang beef (£11.50), bulgogi beef (£8.00), spicy bulgogi chicken (£8.00) and mixed vegetables (£5.00) to go on the grill. Of these, the clear favourite was the recommended anchang beef fillet. Simply marinated in sesame oil, it was beautifully tender, and went well when wrapped in a lettuce leaf with some spring onion and ssamjang. We didn't order dessert, but we were served complimentary melon at the end of the meal, which was another nice touch.

Looking back at my meal, what I enjoyed most was the pace and ritual of eating in a Korean restaurant. We were gently guided through nibbles, starters, and three rounds of BBQ in such a way that we felt neither rushed nor neglected. This was indicative of the excellent service, and many restaurants would do well to emulate the quietly efficient Korean serving style. It is far more preferable to, and professional than the insincere, intrusive and over-familar 'is everything all right with your meal?' spiel that far too many London restaurants think is a substitute for proper service.

Together with sides of steamed rice, lettuce wraps (sang chu), spring onion (pa moochim), six bottles of Hite beer and 10% service, the bill came to a £87 between three – we rounded it up to £30/head. I thought this was a bargain, and I have no hesitation in recommending this restaurant, which really does capture the Seoul of Korean cooking (don't all groan at once).

PS: G, thanks again for the tip - it's a good job you know more about restaurants than football!
Posted by Mr Noodles at Wednesday, November 23, 2011