"Can we go for ramen tomorrow?" I asked on the walk back from the tempura shop.
"Sure, no problem," N replied. “What kind of ramen? There are different shops for different ramen. Shio, shoyu, miso…”
"Tonkotsu," I interjected. "I like pork bones."
"We can do better than that," N said. "We'll go to the best ramen shop in Kudankita – they serve a very special ramen." 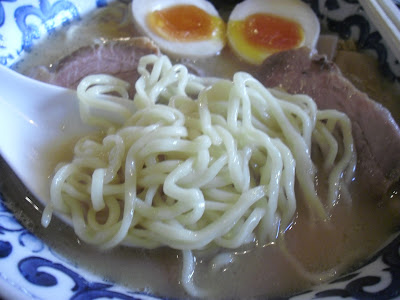 Ramen Day or 27th January 2011, as it's known in the Gregorian calendar, will stay long in the memory as the day on which I sampled some of the best noodles of my life.

The morning of Ramen Day went really slowly, and it felt much later than 11.30 when N and S came to fetch me. This may seem early for lunch but by the time we arrived at 九段 斑鳩 (its Romanised name is Kudan Ikaruga but you won't see this on any signage), there was already a lengthy queue. Whilst N kept our place in the queue, S and I went to the machine to order. 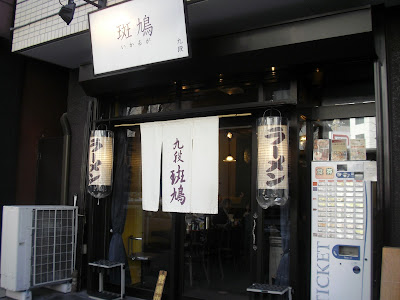 By the side of the machine was a certificate that proclaimed that we were indeed going to sample the 'Best Ramen 2010' in not just Kudankita, but in all of Tokyo. Now anyone can put up a random certificate but this one was awarded by the tabelog website, where punters rate their favourite restaurants. 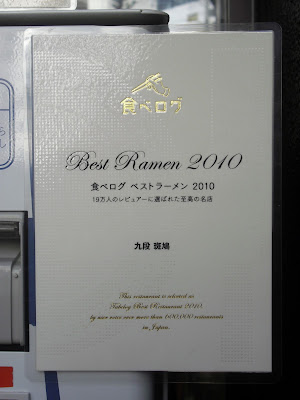 After we got our tickets for 特製らー麺, which translates as 'No.1 Special Noodles', we rejoined N in the queue. The wait was beginning to get to me, especially as I could smell the soup wafting through the cold January air. Eventually a waiter came out, took our tickets and told us that there'd be a table ready shortly. It was about 11.50 by the time we eventually entered the ramen shop. As the waiter had already taken our order, our noodles arrived shortly after we were seated. 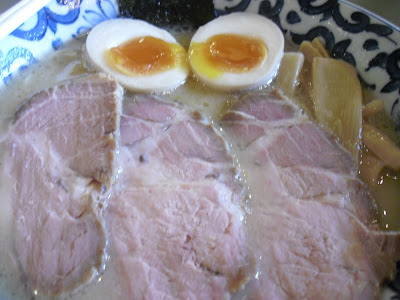 And it was well worth the wait. This was noodle heaven. The ramen were springy and bouncy. Proper QQ. The toppings were a revelation, especially the tender chāshū pork (the Japanese take on cha siu). I also loved the perfectly boiled egg, and let's not forget the menma (fermented bamboo shoots) and dried nori (seaweed), which added a contrast in flavour and texture to the dish.

But as good as the ramen and the toppings were, it was the soup that had me in raptures. Traditionalists may want to look away now, as the soup in the 'No.1 Special Noodles' consists of a blend of tonkotsu (pork bone soup) and gyokai (fish soup) with a shot of shoyu (soy sauce).

The resultant milky broth was amongst the best that I've ever tasted. Tonkotsu can sometimes be too overwhelmingly porky and a little fatty, which is why the gyokai was such a welcome addition, as the smooth fish flavour took the edge off it. It was so damn tasty that I wanted to lick the pattern off the bowl! 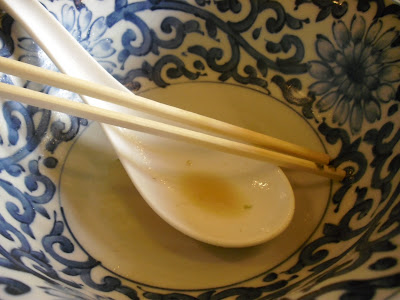 I am reluctant to start pontificating on where to eat in Tokyo. After all, who am I to judge Japanese cuisine, of which I know little, in a city that I was visiting for the first time? Having said that, I have no hesitation in recommending this little ramen joint. Why? Because guys like N and S love it, and moreover, by the time we left, the queue was just getting longer and longer…