However one dish I've neglected so far is Dongpo pork (東坡肉). Named after the 11th century poet, Su Dongpo, it is the very quintessence of Chinese cuisine. In this dish, the pork belly goes through several cooking processes before being braised using a technique called red cooking (hong shao 紅燒).

Red cooking utilises classic Chinese ingredients such as soy sauce, Shaoxing rice wine, rock sugar, and five-spice powder in a braising liquid. Last but not least, fermented red tofu is added to give these dishes their reddish hue, hence the term 'red cooked'. This technique is often associated with Shanghai cuisine but it actually originates from neighbouring Jiangsu province.

When dining recently at Phoenix Palace, the waiter spookily recommended Dongpo pork, just as I was about to order it anyway. This dish can be found in the 'Chef's Selection' section at the back of the menu, where it's listed as 蘇州東波肉(曼頭) with an imprecise English translation of five-spices pork belly with Peking bun (£13.80). Mind you I shouldn't complain about the translation as Phoenix Palace actually go to the trouble of having a fully bilingual Chinese-English menu.

So was this version any good? It was and to use the old cliché, the pork belly did melt in the mouth. The sauce was lovely too; it was sweet but not overly so as the soy sauce, five-spice powder and Shaoxing wine balanced it out. The Peking bun (mantou 曼頭) was an inspired addition, as it was perfect for mopping up the sauce. What would have made it even better is if they deep-fried the bun to give it a crispy outer but that's just me being super-picky.

The first two dishes came from the tabletop specials card of which I preferred the baby octopus with its sharp and zingy dressing. Mind you the prawns were very more-ish with their wasabi mayo coating. The pork and prawn Peking dumplings, which came from an abridged evening dim sum selection, were competently rendered but could have done with more soya chilli dressing.

I think you may have gathered that the pork belly was the dish of the night but running it close was the Chilean sea bass fillet. We ordered this on the recommendation of the waiter, as he reckoned that cold-water fish such as Chilean sea bass are superior to their warm water counterparts. I have no idea whether he's right or not but it's a great line to drop into conversation. With the classic Cantonese accompaniment of ginger and scallions, this perfectly steamed fish was a winner.

We also liked the slightly 'dirty' dish of Cantonese fillet steak (here's a recipe) with its tangy Worcester sauce based marinade and superior onion rings (the best I've had in ages). For our two kinds of rotisserie (siu mei 燒味) we chose Cantonese roast duck (siu aap 潮漣燒鴨) and honey BBQ roast pork (cha siu 蜜汁叉燒). As I've come to expect, both roasts were excellent as was the pak choi w/garlic sauce.

I'll let you into a secret; I occasionally score free desserts in Chinese restaurants. It's usually just a bowl of sweet Cantonese soup (tong sui 糖水) as was the case with our complimentary sesame paste. It's not the best looking dish but I enjoyed it even if it was a bit too sweet.

I know what you're thinking but I was being offered complimentary desserts long before I started taking photos of my food. I'm not sure why I get the occasional freebie but I think it's like getting an upgrade on a flight; it occurs randomly but won't happen if you're seen to be trying.

The Vibe
Full disclosure. Phoenix Palace is one of my favourite restaurants in London and I have fond memories of dim sum feasts and great nights out. I love the ambience and following a refurb, it's better than ever. Even on a Wednesday night in August, it was buzzing although the lighting meant it was hard to take decent photos. Service was better than normal with great recommendations and free dessert. 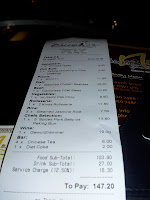 The Bill
With a bottle of average South African Gewurztraminer, rice and a pot of tea, the bill racked up to £147.20 including 12.5% service between four. That's roughly £37 per head, which I think is good value given the quality of the food.

What The Others Thought
Joining me for dinner was Mr Wine, Soft Aussie and Dr M and they loved almost everything. The hard to please Dr M even went so far to proclaim Phoenix Palace as the best Chinese restaurant that I'd taken him to. The only slightly negative note was the dessert, as only Soft Aussie liked it. Mind you, the others acknowledged that it was a matter of personal taste rather than it being a bad dessert per se. Moreover it was free.

The Verdict
I had no intention of blogging about this restaurant for a third time but I enjoyed this meal so much, I wanted to share it with you. Phoenix Palace can have its off days but on this occasion everything came together. On this kind of form it's well worth a visit.